Name That Tune : Theme Songs for John and Sarah 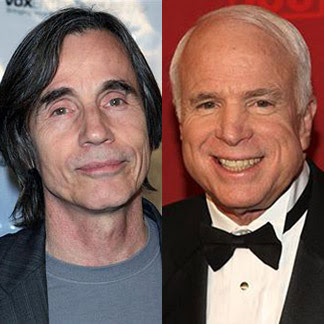 Jackson Browne has filed a lawsuit against John McCain after the Republican presidential candidate used a portion of Browne’s “Running On Empty” in a campaign commercial without permission.
How about SOS by ABBA? Just trying to help…
By Zoltan Abraham / The Rag Blog / September 18, 2008

Check out our suggestions below.

McCain has a music problem. He has a hard time using songs at his campaign rallies without being challenged by the artist for copyright infringement.

But since McCain seems undeterred, why not give him some suggestions for the songs that he *should* use at his rallies?

Let’s Have a War by Fear

Video Killed the Radio Star by the Buggles

Tragedy by the Bee Gees

Nowhere Man by the Beatles

Union of the Snake by Duran Duran

This Is Not America by David Bowie

Master of Puppets by Metallica

The Man Who Sold the World by David Bowie

Always Crashing in the Same Car by David Bowie

The Imperial March from Star Wars

Running With the Devil by Van Halen

Welcome to the Jungle by Guns N’ Roses

Diamonds Are a Girl’s Best Friend by Marilyn Monroe

Everything You Know Is Wrong by Weird Al Yankovich

The Number of the Beast by Iron Maiden

The Real Slim Shady by Eminem

We Don’t Need Another Hero by Tina Turner

The Man You Fear by Marilyn Manson

Money for Nothing by Dire Straights

The Time Warp from The Rocky Horror Picture Show

Baby Did a Bad, Bad Thing by Chris Isaak

I Can’t Quit Her by Blood, Sweat, and Tears

And for Sarah Palin:

Does Your Mother Know That Your Out by ABBA

Rich Girl by Hall and Oats

I Want It All by Queen

Oops, I Did It Again by Britney Spears

Everybody Makes Mistakes by Hanna Montana

Bad to the Bone by George Thorgood

Back in the USSR by the Beatles

The March of the Black Queen by Queen

The Thrill is Gone by B.B. King

Happiness Is a Warm Gun by the Beatles

What are your suggestions?

And for old times’ sake, here is the old Bush and Blair lovesong – not in the best of taste, but still wickedly funny:

Zoltan Abraham is affiliated with Progressives for Obama.

2 Responses to Name That Tune : Theme Songs for John and Sarah