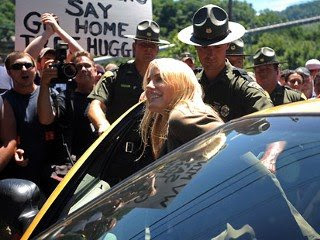 For those who follow the climate issue, a top NASA scientist, James Hansen, foremost authority on climate change, was arrested at a non-violent protest of mountaintop removal coal mining in West Virginia. (Actress Daryl Hannah was also arrested at the protest.)

…I can’t remember a more charged atmosphere. The majority of people surrounded one-half of the stage, supporting each speaker calling for an end to mountain blasting. Separated by police, the remainder crowded around the rest of the stage, wearing Massey t-shirts and shouting their disapproval.

I spoke shortly after Ken Hechler, the 94-year-old former Congressional Representative who has decried the effects of mountaintop removal in his region for more than three decades. “I want to thank Don Blankenship for inviting me to this rally,” I began, to a mixture of catcalls and applause. I told the crowd that mountaintop removal isn’t just a local issue, it’s an American problem — brought to us by Massey Energy and other coal companies…