Neda and the Kent State 4 : Heartbreaking Then and Now 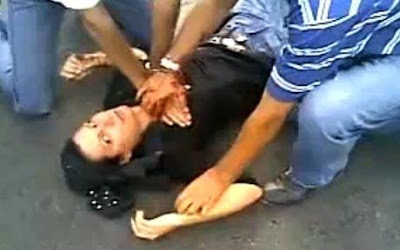 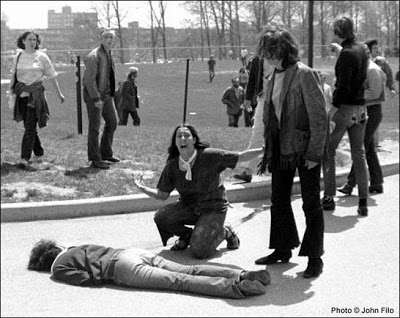 (Above) Neda Agha-Soltan, 27, who bled to death on the streets of Tehran, Saturday, June 20, 2009. Still shot from video taken with cell phone and posted to YouTube. (Below) Mary Ann Vecchio, a fourteen-year-old runaway, kneeling over the dead body of Jeffrey Miller after he was shot by the National Guard during demonstrations at Kent State, May 4, 1970. He was one of four students killed. Pulitzer Prize-winning photo by John Filo from Wikipedia.
Four dead in Ohio…
Heartbreaking then and now

President Obama responded to a question at his June 23 press conference that he was “appalled and outraged” by the violence following the controversial electoral outcome in Iran.

Asked specifically about Neda Agha-Soltan, 26, a bystander at the protests whose shooting death on a Tehran street has been blamed on Iran governmental forces and is the subject of a widely-circulated video, Obama responded it is “heartbreaking.” He went on to say “I think that anybody who sees it knows that there’s something fundamentally unjust about that.”

This eminently reasonable assessment can be contrasted with official opinion in the wake of the fatal shooting of four students at Kent State University on May 4, 1970. None of the four students killed by the Ohio National Guard on that day, Allison Krause, who had just turned 19, Jeffrey Miller, 20, Sandy Scheuer, 21, or William Schroeder, 19, were armed. Two, Scheuer and Schroeder, like Neda Agha-Soltan, were not participants in the demonstration, they just happened to be at the wrong place at the wrong time.

Then-President Richard Nixon expressed no sense of fundamental injustice. According to his official statement, “This should remind us all once again that when dissent turns to violence, it invites tragedy.” Characteristically, then-Vice President Spiro Agnew went even further, assigning blame to a “calculated, consistent, and well-publicized barrage of criticism against the principles of this nation.”

These statements are not wholly inconsistent with what Iranian Supreme Leader Sayyed Ali Khameini had to say about the protests in his country: “I have insisted and will insist on implementing the law in issues related to the presidential election, and the Islamic system and people will not give in to pressure at any cost.”

On May 15, 1970, two African-American students at Jackson State University, Phillip Gibbs, 21, and James Green, 17, were shot and killed in similar circumstances. Again, these slayings elicited no official sense of fundamental injustice.

Let us hope we now have an administration more attuned to injustice than that of Nixon and Agnew. Will the spotlight be fixed on injustice in Iran while turning a blind eye to injustice at home or elsewhere?

Nor are there any indications that any indictments for crimes against humanity in the “war on terror” are likely.

We must insist there be no double standard. Accountability applies to our own government as well as others.

President Obama concluded his remarks about the murder of Neda Agha-Soltan with the observation, “While this loss is raw and extraordinarily painful we also know this: those who stand up for justice are always on the right side of history.”

1 Response to Neda and the Kent State 4 : Heartbreaking Then and Now