Neglecting Our Responsibilities to Iraqis 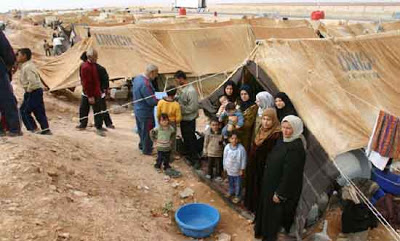 The international community is evading its responsibility towards refugees from Iraq by promoting a false picture of the security situation in Iraq when the country is neither safe nor suitable for return, Amnesty International said today.

In its new report, Rhetoric and reality: the Iraqi refugee crisis, which is based on recent research and interviews with Iraqi refugees, the organization said that the world’s richest states are failing to provide the necessary assistance to Iraqi refugees, most of whom are plunged in despair and hurtling towards destitution.

“Governments have done little or nothing to help Iraqi refugees, failing in their moral, political and legal duty to share responsibility for them,” said Amnesty International. “Instead, apathy and rhetoric have been the overwhelming response to one of the worst refugee crises in the world.”

Amnesty International said that the Government of Iraq and states involved in the invasion of Iraq in 2003, in particular the USA and the UK, highlight “improved” security or “voluntary” returns to Iraq out of political expedience, to demonstrate that their military involvement has been a success.

“People are being killed every month by armed groups, the Multinational Force, Iraqi security forces and private military and security guards. Kidnappings, torture, ill-treatment and arbitrary detention pervade the daily lives of Iraqis. People continue to attempt to flee, something that is now very difficult with the recent imposition of visa restrictions on Iraqis by Jordan and Syria.”

According to the latest estimates of the United Nations High Commissioner for Refugees (UNHCR), the number of Iraqis who have fled their homes has now reached 4.7 million, the highest since the US-led invasion of Iraq and the subsequent internal armed conflict.

While Syria and Jordan have shouldered most of the refugee influx, they have now resorted to drastic measures such as restricting entry and deporting people who may be at risk of persecution, partly due to the lack of support from the international community.

Having exhausted savings, many refugees are now living in complete destitution and facing new dangers, such as being forced into so-called “voluntary” return to Iraq and child labour — many families have been forced to send their children to work in the streets in a desperate bid to help them survive.

For some refugees, the difficulties they are facing in the host country are prompting them to make the difficult and dangerous decision to return to Iraq, either temporarily to collect a pension or food ration or for other such reasons, or more permanently because of their desperate situation, not because they feel they are no longer at risk of human rights abuses in Iraq.

They are making this decision as they feel they have no other option.

A 62-year-old retired Shi’a army officer, Majid, a widower with seven adult children all living in Baghdad, told Amnesty International in February that after attempting to find protection in Syria, with only the 50 lira (US$1) in his pocket, he had to return to Iraq. Even though he was extremely scared, he had lost hope, saying “If I die, I die.” Majid fled Iraq in February 2008 after two of his nephews, Mansour and Sami, aged 17 and 19, were beheaded by members of an armed group north of Baghdad. He exhausted his savings in Syria and was soon left with nothing. Weeping, he explained to Amnesty International that he had no alternative but to return to Iraq.

Many European countries are now attempting to deport Iraqis, sometimes to some of the most dangerous parts of Iraq such as the south and central regions. In addition to taking direct actions forcing Iraqis to return, they are using indirect methods such as cutting off basic assistance and services to rejected asylum-seekers in order to force them to “voluntarily” return to Iraq.

Sweden, which is host to the largest number of Iraqi refugees in Europe and once a positive example to its neighbours, has now changed its approach and is denying the vast majority of Iraqis protection and forcibly returning some to very dangerous areas.

Amnesty International is greatly concerned that the failure to respond to this crisis will worsen an already dire situation. Amongst other things, it is calling on the international community to:
• urgently and substantially raise sustainable financial assistance;
• end practices such as forcible returns that put lives at further risk;
• cease practices that result in coerced “voluntary” returns;
• allow individuals to seek paid employment; and
• extensively increase resettlement places for the most vulnerable refugees to start a new life in a third country.

Amnesty International is also calling on the governments of Syria, Jordan, Lebanon and Egypt, as well as those of other countries in the region, to allow unrestricted access to people fleeing Iraq, cease all deportations to Iraq, and grant refugees access to the labour market.

This entry was posted in RagBlog and tagged Iraq, United Nations. Bookmark the permalink.