Posted on September 3, 2009 by Thorne Dreyer 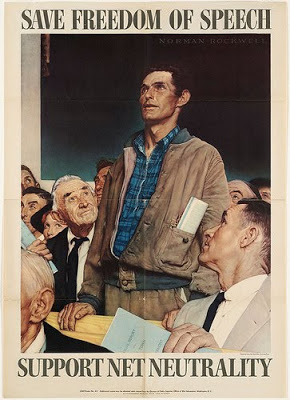 It’s no secret the five biggest telecom companies want Net Neutrality to disappear. All just happen to be members of a ‘pro-consumer’ group.

Chris, McGreal, a reporter for Britain’s Guardian newspaper, took to the road last month to report on how Americans living along Route 66 — made famous in John Steinbeck’s fictional Grapes of Wrath journey — are faring during the recession.

Odd, then, that McGreal reports this:

The outbursts against President Obama’s healthcare plans filling television screens, with opponents calling him a Nazi and accusing him of planning death committees to do in old people, are to a large degree manufactured by the same people who use similar tactics to oppose abortion.

McGreal has it right: There is no genuine mass uprising against healthcare reform or climate change legislation. But the industry groups and corporations who benefit from the status quo—and thus have the most at stake in these debates—want us to think otherwise. And they’ve developed a slick way of manufacturing dissent: creating fake grassroots — ”astroturf” — organizations to do their bidding in our name.

Jim Hightower describes astroturf organizations as “the corporate version of grassroots…well-orchestrated PR efforts that put real folks out front, but are instigated, organized and funded by corporate interests and right-wing front groups.”

Astroturf groups like Americans for Prosperity and FreedomWorks rent themselves out to combat policies that hurt major corporations, from ExxonMobile to AT&T. They were behind April’s Tea Bag rallies, which protested tax increases, and flew hot air balloons as part of a campaign to discredit climate change.

Now corporations — AT&T, Verizon, Comcast, Time Warner Cable, and Qwest — are paying astroturf groups to derail one of the most important public policy initiatives of our time: Net Neutrality. The cable and telecom lobby is spending hundreds of millions of dollars trying to become the Web’s new gatekeepers.

What is Net Neutrality?

Astroturf groups have set their sights on blocking the passage of a valuable new bill called the Internet Freedom Preservation Act. The bill, introduced into the House in early August, would protect the Internet from telecommunications and cable companies who want to control access to online content—and thereby make more money.

The principle that protects the Internet freedom we now enjoy is Net Neutrality, which leaves us free to visit any website and create and share anything we can imagine. This “open” platform allows us to bypass the old corporate gatekeepers to create our own entertainment, and organize for social change without fearing that an Internet service provider like Comcast or AT&T will block our messages because they disagree with our politics.

Net Neutrality as a baseline rule for the Internet was stripped away by a 2005 U.S. Supreme Court ruling (PDF link) that effectively allowed phone and cable companies to discriminate against websites, applications or services that they didn’t like.

We must restore this guiding principle to protect and ensure a free-flowing Web for all. The new legislation would mandate that all ISPs adhere to Net Neutrality and refrain from controlling, blocking or slowing down online content.

Rolling out the astroturf

So who exactly is shilling for industry? Let’s connect the dots.

It’s no secret the five biggest cable and telecommunications companies want Net Neutrality to disappear. All five just happen to be members of the “pro-consumer” (read: astroturf) group NetCompetition.org, which is trying to make this nasty problem go away for them. Scott Cleland, who heads the operation, has made it his job to bash Net Neutrality, even likening it to socialism: “Just like the Soviet socialists, the net neutrality movement blatantly misrepresents the facts.”

And when FreedomWorks isn’t throwing a tea party, they’re throwing a tantrum about Net Neutrality. Take it from Dick Armey, the former House majority leader who leads the group: “The proponents of Net Neutrality have some very nice sound bites and flowery talking points that would lead you to believe that it’s about keeping the Internet free,” he writes. “I assure you nothing could be further from the truth.”

Who has paid FreedomWorks bills? AT&T.

Meanwhile, the American Consumer Institute — doesn’t that sound innocuous — is questioning the new Net Neutrality bill for consumers. Stephen Pociask, a telecom consultant and former chief economist for Bell Atlantic, is behind the site.

In 2006, when a similar Net Neutrality bill was introduced, this group actively worked to get lawmakers to vote against it.

Speak out or cede control

What’s the difference between a real grassroots organization and a fake one? Astroturf groups are paid shills who don’t openly disclose their funding sources, pretend they’re taking a stance in the public’s interest and manufacture events to make them appear to be backed by a public majority.

For too long, special interest money has polluted the waters of public discourse in America. And unfortunately, our entrenched corporate media system is all too willing to repeat astroturf messages, thereby legitimizing them and stifling genuine debate.

The open Internet lets us speak for ourselves—unlike nearly all other media platforms. If we speak out in support of the Internet Freedom Preservation Act and drown out the din of astroturf groups and industry lobbyists, it will remain that way.

And Astroturf Groups Try to Enlist Conservatives to Oppose Net Neutrality by Philip Dampier / Save the Internet / August 5, 2009

3 Responses to Net Neutrality : Next Target of Astroturf Groups?