Net Neutrality : The Fight Ahead 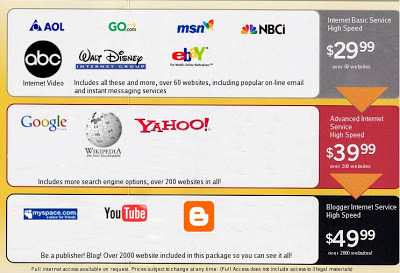 Image from Francesco Lapenta.
Net Neutrality: All is not lost

“The Day the Internet Lost” read a full-banner headline on Huffington Post. The New York Times held a wake for the Internet reporting that Internet service providers can now “block or slow specific sites” and demand that content producers now “pay a fee to ensure delivery of material.”

On Tuesday, the DC Circuit court took away the Federal Communications Commission’s to protect our rights on the Internet. The decision has been widely reported as the end of an era for America’s Internet. But what does the future hold? And what can we do to keep the Internet open and democratic?

The ruling echoes the Supreme Court’s Citizens United v. FEC decision, which amounted to a judicial giveaway of our democracy to powerful corporations. Yesterday’s court decision effectively hands the future of communications over to corporations like AT&T, Comcast, Verizon and Time Warner Cable.

This is bad news on several fronts:

Broadband ambitions sidelined: High-speed Internet access is a central component to our economic recovery. Putting high-speed Internet into the hands of the third of the country that now does not connect is Priority #1 of the FCC’s National Broadband Plan. The court decision pulls the carpet from beneath the agency’s plan, effectively leaving this essential job to companies that have failed — by almost every international measure — to deliver a fast and affordable services to Americans stuck on the wrong side of the digital divide.

The end of openness: The decision could mark the beginning of America’s Broadband Dark Age. The court ruled that the FCC has no right to stop carriers from developing a two-tier Internet and blocking Web content that they don’t like. They’ve already indicated their interest in prioritizing certain content over others. As The Economist reported that an ISP could simply “decide to hijack all search queries… and redirect them to its own search site so it could harvest the extra hits, even when users were attempting to use Google or other search engines.” Nice!

It’s Now Their Internet, Not Yours: The decision could bring us a world where Internet users no longer have control over their Internet experience — where we have no protections against ISPs that abuse our Internet rights at will and without repercussions. Increasingly AT&T, Comcast and Verizon have sought to encroach upon user choice online. Net Neutrality is essential to keeping the future of communications in the hands of all Americans — and preventing ISPs from picking winners and losers on the Web. We’ve just lost that guarantee and it’s only a matter of time before the Great Encroachment begins.

But don’t give up hope. There’s a way out of this legal mess. The easiest route to restore an open Internet is for the FCC to simply vote to reclassify broadband under Title 2 of the Communications Act. This move would return to the agency the powers to protect consumers that it had before Bush-era deregulation struck it down.

Other remedies include a Supreme Court appeal or congressional legislation but, as Prof. Jack Balkin notes, such actions run the risk of a conservative Supreme Court that appears to favor corporations over the public interest. And a move in Congress would require 60 votes from a Senate where passing anything is nearly impossible – much less on an issue over which broadband providers like AT&T and Comcast wield a corrupting level of influence in both parties.

The FCC, however, could reclassify by a simple majority vote of commissioners. Chairman Genachowski has made protecting the open Internet a signature effort of his tenure. He has the support of the majority of FCC commissioners on that. He should now move to reclassify with a simple vote at the agency.

Moreover, the Supreme Court case has specifically said the decision to reclassify is up to the FCC, and as long as the Commission gives good reasons for its choice to do so, that action should be upheld in the courts.

Makes sense, right? That’s why Free Press is pushing full throttle to embolden the FCC to reclassify in a way that allows it to protect Net Neutrality and fulfill the universal access goals envisioned in its National Broadband Plan. (You can join the action here.)

In the world of wonky telecommunications policy, reclassification — or returning the Internet to its legal status prior to Bush-era deregulation — is tantamount to declaring World War III with the phone and cable lobby.

That’s a fight that we’re ready to have right now. The future of open communications depends upon it.

Source / Save the Internet / Free Press

From Brian Lehrer Live on Vimeo.

As I predicted last month, a federal appeals court recently overturned the fines imposed by the Federal Communications Commission on Comcast in 2007. The ruling was overturned on the grounds that the FCC lacks jurisdiction over telco Internet access offerings.

This decision has a number of ramifications, which I’ll go into shortly. But first: Some people are saying this ruling sounds the death knell to net neutrality.

How can I put this delicately? Horsepucky.

The end game is precisely the opposite: This decision has essentially ensured the passage of net neutrality.

Here’s how things are likely to play out. The FCC very likely will move to reclassify Internet services as a Title II common carrier services (which transport people or goods under regulatory supervision). Why? Because the FCC wants to move forward on the broadband stimulus bill, which relies on the ability of the FCC to regulate Internet access providers.

Reclassifying Internet services as a Title II service would provoke a royal catfight with the carriers, which have preemptively warned the FCC not to go there. Back in February, carriers — including Verizon, Time Warner, AT&T, Qwest, the National Cable andTelecommunications Association, and the wireless and phone company trade associations — warned FCC Chairman Julius Genachowski that trying to classify Internet access as a Title II service would provoke “years of litigation and regulatory chaos.”

More pointedly, they indicated such a decision would make them unwilling to invest the billions of dollars required to achieve the government’s goal of 100MBps broadband speeds to 100 million households by 2020.

This is a potent threat, because it shines a spotlight on the real elephant in the corner: Everybody wants broadband Internet access, but nobody knows how to pay for it. Internet connectivity simply doesn’t generate enough profit to justify the investment — whether from carriers, Google, or anyone else. If the carriers decide to pull their investment dollars — or spend them on litigation instead — good luck having a functioning Internet in 2015. (But that’s the subject of another column).

It remains to be seen whether the FCC will cave. I’m betting not — Genachowski doesn’t strike me as the kind of guy who gives in to threats. Regardless, there’s a belt-and-suspenders strategy that the FCC will likely pursue in parallel: petitioning Congress to modify the FCC’s charter to explicitly cover Internet services.

How this will play out depends, of course, on the exact makeup of Congress — and the willingness of lawmakers to cross party lines. My guess, though, is that such a move will ultimately succeed, if for no other reason than common sense. The FCC is set up to regulate “communications,” and it’s ridiculous to argue that the Internet is not a communications service.

And once that happens, the passage of net neutrality is a foregone conclusion. The wild card is how it will be defined. As noted previously, a U.K.-based Web Site recently filed a motion with the FCC requesting enforcement of “open search” rules to complement net neutrality — which could open up a whole new angle.

Pass the popcorn, it’s shaping up to be an interesting couple of years.

1 Response to Net Neutrality : The Fight Ahead