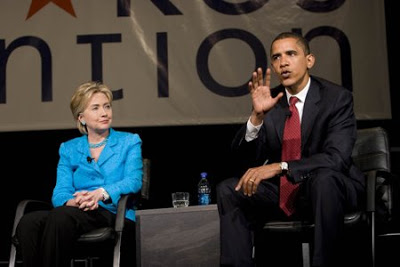 Netroots Nation, the third annual gathering of liberals and progressives from the blogosphere and beyond, meets July 17-20 at the Austin Convention Center. In addition to panels and discussion groups, the convention includes a progressive film series, a career fair, organizing sessions, and more. To register, or for panel and speaker lists, plus lodging and travel information, visit netrootsnation.org.

As I write, the video “McCain’s YouTube Problem Just Became a Nightmare” has 2,654,664 views on the eponymous video-sharing website.

“There’s no question John McCain is getting a free ride from the mainstream press,” reads the description accompanying the clip, a three-minute reel of McCain flip-flops and flubs. “But with the power of YouTube and the blogosphere, we can provide an accurate portrayal of the so-called Maverick. We can put the brakes on his free ride!”

And there’s as succinct an encapsulation of Internet-driven, people-powered politics – the “netroots” – as you’re likely to find. Whereas four years ago it took a well-financed pack of political assassins to Swift boat John Kerry, increasingly cheaper technology, user-friendly tools like Blogger and WordPress, and an explosion in online fundraising are steadily wresting media power away from professionals to an impassioned grassroots base, irrevocably altering the political landscape.

Attempting to coalesce and promote that process is this weekend’s Netroots Nation, a four-day event at the Austin Convention Center bringing together the brightest lights in liberal and progressive opinion and activism. For regular blog readers, the speakers and attendees list reads like an RSS feed: Daily Kos founder Markos Moulitsas Zúniga, Duncan “Atrios” Black, Hullaballo’s “Digby” Parton, John Aravosis of AmericaBlog.com, and The American Prospect’s Ezra Klein, to name a select few – plus scores of other bloggers, authors, activists, politicians, journalists, and filmmakers.

But aside from a collection of technological tools, a constellation of small donors, and a din of liberal opinion, who exactly are “the netroots”? How are they changing politics? And can they reinvigorate a Democratic Party drifting dully to the center (and beyond) for more than two decades?

While 2004’s Swift boating represented the worst of top-down attack politics (amplified tenfold by an easily distractible media’s ceaseless reporting on “the controversy”), that year also saw the fullest expression of the Internet’s bottom-up potential to date: Howard Dean’s campaign. Dean’s example – via the adoption of his Web-driven, small-contributors model and his own leadership of the Democratic National Committee – still reverberates today. So it’s no surprise Dean recognizes the power of the netroots. Calling Netroots Nation “an important opportunity for progressives to come together and discuss the values and vision we share,” he says, “the progressive activists who fill Austin’s halls are an important part of our party and our nation, pushing every day for the change our country so desperately needs.”

Compared to the decades of hierarchical organization that modern movement conservatism required – financing right-wing think tanks, deregulating talk radio, and midwifing the Christian conservative movement (all arguably waning in importance) – the netroots’ ascendancy looks like an overnight success story. Its origin is often traced to the Nineties impeachment trial of Bill Clinton, which liberal Web hub MoveOn.org formed expressly to oppose; a prototypical weblog, Bob Somerby’s the Daily Howler (www.dailyhowler.com), also pushed back against the impeachment circus and its media facilitators. Then came a succession of flash points, each swelling the blogosphere’s readership and relevance: Florida 2000. Iraq. Election 2004. Katrina. “Macaca.” The 2006 Democratic reclamation of the House and Senate – and possibly, the 2008 reclamation of the White House.

“I think things move faster nowadays. … It’s just the nature of technology,” says Netroots Nation panelist Matthew Yglesias, who blogged independently before joining the American Prospect; he’s now a staffer at The Atlantic Monthly and writes for its website. “And also you’re talking about a movement, a group of people defined in part by using certain kinds of tools, so more and more people and more and more activity is moving online very rapidly. So what the conception of what the quote-unquote ‘netroots’ is is changing and growing.

“It’s a good way of assembling communities of interest,” Yglesias continues. “It may be [that] only a tiny minority of people in every American city are interested in a question like FISA,” the Foreign Intelligence Surveillance Act and the debate over vesting the president with new spying powers and granting retroactive immunity to snooping telecoms, “but thanks to the Internet, you can form a community of people who care about something like that.” By way of contrast, he points to the recent past, when “only players with a direct financial stake could effectively get themselves organized and make themselves known.”

It’s building a community with similar ideals and goals that makes the blogosphere formidable, a community Netroots Nation hopes to reinforce. “The nature of the netroots, of Inter­net politics – it’s all interacting with a huge number of people you don’t actually see or meet,” says Yglesias. “It’s nice to have the opportunity to get together and see other participants in this world. … It continues to build this sense of community, and there’s certain kinds of exchanges you can only do face to face.”

Who Controls the Message?

At last year’s convention, a leadership panel featuring Pelosi, Senate Majority Leader Harry Reid, and Rep. Rahm Emanuel was canceled – presumably because they most certainly would’ve gotten an unpleasant earful. Their appearance was scheduled at the same time the Democratic-controlled Congress looked like it was caving on Bush-directed changes to FISA, a move vehemently opposed by the netroots. FISA revisions are again up in the air this year, and tension persists between the netroots and Democratic politicians capitulating to a GOP-created “compromise” on FISA changes that will both expand warrantless presidential wiretapping authority and keep the program from judicial scrutiny, by granting civil immunity to telecom companies that have apparently already violated existing law. “Part of what you want to do as an activist is help the better candidate win in November,” says Yglesias, “but another part of what you wanna do is hold the better candidate’s feet to the fire.” Or as Salon.com blogger Glenn Green­wald (Unclaimed Territory) recently posted: “From the beginning, blogs have been devoted to opposing Democratic complicity and capitulation – to protesting the lack of Democratic responsiveness to their supporters – every bit as much as opposing GOP corruption and media malfeasance. That role is at least as important as the others.”

A new Web wrinkle has been the organizing success of the Obama campaign, using several of the netroots’ tools: harnessing online donors, accumulating a massive e-mail list, and building a formidable social-networking presence on websites like Facebook. It’s already having an impact on the netroots: Partially at Obama’s request, donations to third party groups that may deviate from Obama’s message have dried up. MoveOn.org recently announced it is shutting down its anti-McCain 527 group for lack of donations. So as the Obama campaign increasingly implements its message top-down, what will that mean for bloggers and activists?

“He’s running a top-down campaign which they think will help them get elected,” says Yglesias. “And I think they may be right.” But, he concedes, “a lot of activists aren’t gonna like that, because there’s always a tension between people who are pushing a specific policy agenda and people who are trying to win the next election.” Again, FISA has fanned the flames – Obama recently declared he supports the “compromise” legislation vesting the president with new spying powers – in direct contradiction to his earlier opposition and promise to filibuster the bill – and that put his campaign loudly at odds with the blogosphere. “Obama’s gonna want the flexibility to sell out people and causes if he feels it’s necessary,” says Yglesias. “That’s sort of the essential tension in all political movements; I don’t think it’s unique to the Internet. But the fact that people are thinking about it now shows that some success is being had on the part of the netroots.” Yglesias calls it “the problem you have when you may be winning.”

“It’s understandable that a presidential campaign would want to, as much as possible, control their message, but it’d be a mistake of the campaign if they fail to find ways to work with bloggers to help get that message out,” writes Duncan “Atrios” Black in an e-mail interview. But, he concedes, “there’s no way to control what bloggers write, of course.”

A senior fellow at bias-watchdogs Media Matters for America, Black says: “Media accountability is certainly my issue. Much of what is wrong with politics in this country is due to how the media covers, or doesn’t cover, politics at all levels of government.” His blog, EschatonBlog.com, focuses as much on media failings and exploding Beltway narratives as anything else. To that end, he sees blogs having greater potential in setting the progressive agenda. “Strangely, I still think there’s a missing piece due to the unwillingness of politicians to fully make use of the messaging potential of bloggers and the netroots more widely,” writes Black. “For better or worse, we are the ‘liberal media,’ or at least a big chunk of it, and we could help set the political agenda for the country.”

Aside from getting people more interested in politics and welcoming more people to the conversation, have we reached the limits of what the netroots and online organizing can do? “The hope is always that some people who read blogs are inclined to do things like give money to worthy candidates and that, of those people, some more will be inspired to move into more time-consuming activities such as volunteering or running for office,” says Black. “By giving people a tiny way in so that they feel involved, you hope you can provide a path for people to do even more.”

And as more people find a way in, the netroots will grow in size and prominence. They won’t always come to agreement – among themselves or with outside political forces – but that’s their viral, indefatigable nature. They’ll continue to grow, often in unexpected ways. For instance, the social networking tools on My.BarackObama.com allow online supporters to join groups devoted to specific causes. One new group has ballooned into the largest on the entire site, numbering more than 16,250 members in little less than a week. Who are they? A collection of Obama supporters opposing his FISA stance: “Please Vote NO on Telecom Immunity – Get FISA Right.”

Once the politicians open the door – there’s no telling where the roots will grow.