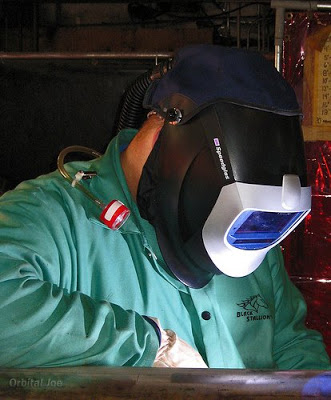 Welder testing for hexavalent chromium. Photo by Orbital Joe.
In 2003, James Gentry and his men were responsible for guarding a KBR-run power plant. The soldiers were stationed there for months before being informed that the site was contaminated with a chemical known as hexavalent chromium.

James Gentry served his country honorably as a battalion commander in Iraq. Now, he is dying of a rare form of lung cancer. And he’s not the only one. A troubling number of troops in Gentry’s Indiana National Guard unit have bloody noses, tumors and rashes. And tragically, one soldier has already died.

New reports suggest these injuries may be the result of exposure to toxins at a KBR-run power plant in Southern Iraq. In 2003, James and his men were responsible for guarding that plant, and protecting KBR’s employees. The soldiers were stationed there for months before being informed that the site was contaminated with a chemical known as hexavalent chromium.

Hexavalent chromium is a deadly carcinogen. It’s the same toxin that Erin Brockovich became famous for campaigning against. James believes that it was the inhalation of this chemical that caused his cancer, and the other rare illnesses among the Guardsmen who served at the plant.

But this is not just some sad story about accidental chemical exposure. This is a question of responsibility. CBS News has uncovered evidence that KBR may have known about the contamination at the power plant months before it took any action to inform the troops stationed there.

If the CBS story is proven true, checks need to be written, contracts should be cancelled, and heads must roll. James signed up to serve his country, and he was told to protect KBR contractors. He did his job. But it doesn’t seem like KBR did theirs. If the company neglected to take quick and decisive action, it must be held responsible for the months of avoidable toxic exposure that may be taking the lives of American servicemembers.

From burn pits to power plants, we are hearing more and more about troops who have been exposed to toxins while serving our country overseas. Senator Evan Bayh of Indiana has announced that he will reintroduce legislation to create a medical registry for military personnel exposed to toxins. That’s a vital first step towards discovering the full extent of toxic exposure in Iraq and Afghanistan, and is critical to preventing a replay of the Agent Orange situation after Vietnam.

We need real answers from KBR. And so far, the company has denied any wrongdoing whatsoever. Iraq and Afghanistan veterans will stand behind our brothers and sisters in demanding accountability. The veterans’ community will fight back, and we need everyone’s help. Add your name to IAVA’s petition, and tell KBR to come clean now. KBR must tell Congress and the American people what they knew, and when they knew it. James Gentry and his fellow soldiers deserve the truth.

[Paul Rieckhoff, 33, is the Executive Director and Founder of Iraq and Afghanistan Veterans of America (IAVA). A non-partisan non-profit group with over 100,000 members around the world, IAVA was founded in 2004 and is America’s first and largest Iraq and Afghanistan Veterans organization. Rieckhoff was a First Lieutenant and infantry rifle platoon leader in the Iraq war from 2003-2004. He is now a nationally recognized authority on the war in Iraq and issues affecting troops, military families and veterans.]

1 Response to New Reports : Did KBR Poison GIs in Iraq?