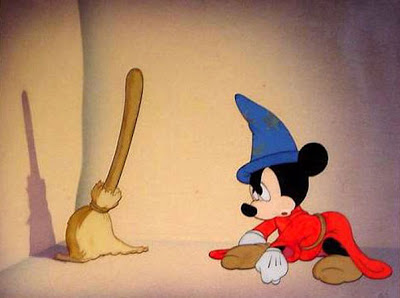 Cloning the evil broom:
Kirk Watson and the New Urbanists

In the movie Fantasia, Mickey chops the evil broom into bits only to have them transform into a whole army of equally evil broom clones. Too often this happens in real life, election after election.

In Austin, we unelected New Urbanist Brewster McCracken only to have him replaced on the city council by two other New Urbanists, Chris Riley and Bill Spelman. New Urbanism for the uninitiated is neo-liberal ethnic cleansing.

Riley also replaced McCracken on the Capital Metro Transit Authority Board and will be joined by fellow New Urbanists John Langamore, Frank Fernandez, and likely a fourth yet unnamed clone appointed by the County commissioners.

The result of all this is a complete takeover by developers of transit in Austin. They have raised bus fares by over 100% in the last thirteen months, jettisoning millions of trips from the system, crippling community mobility and damaging air quality.

Pulling the puppet strings on the whole marionette malaise is transit czar Kirk Watson who heads CAMPO, the regional transportation planning authority. You may remember the diminutive Dem who almost singlehandedly ruined the Obama campaign with his appearance on MSNBC’s Hardball. Watson’s inburst caused the biggest polling point drop of the entire election.

As a state senator in 2009, he returned to Central Texas to flaunt his wizardry under the Pink Dome. Watson changed state law allowing for his agency to pick an additional Metro board member and removing all checks and balances from the fare setting process, greenlighting unlimited hikes for eternity. It is also well known that Watson wants to be Governor of Texas someday.

In a Union drive many years ago my mentor Helen Parsley told me, when I complained about a particularly bad manager, “Bad managers are our best organizers.”

Indeed, I would likely not know any of my fellow organizers and activists had it not been for the Imperial Savant management of our world by George W. Bush.

With our understanding of the Fantasia phenomena and the Parsley principle, I propose that, instead of unelecting Watson, we draft him to be President of the United States and give him greater power.

This concept should be applied universally. Term limits should be abolished, and elections held as infrequently as possible. This accomplishes two things. It ends the revolving door that politicians and lobbyists exploit and corners the market on graft and corruption, therefore devaluing bribes and kickbacks.

The result for us will be greater organization, and if we successfully allow a long term Mobutuesque regime to blossom, maybe the advent of the revolution we all crave.