New York : Marching for the Children of Gaza 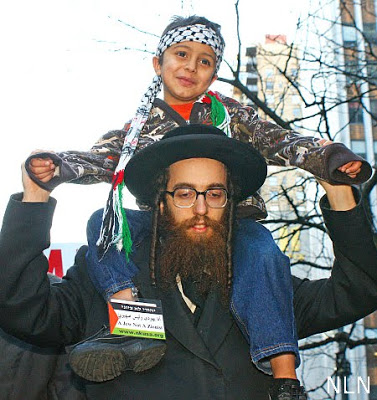 Thousands marched in New York on Dec. 27, 2009, in support of the people of Gaza. Photo by Bud Korotzer / NLN.
Marching for the children of Gaza:
Thousands demonstrate in New York City

The throng marched through streets filled with New Yorkers and tourists in holiday mode, passed crowded Rockefeller Center, and ended at the Israeli Consulate at 42nd Street and 2nd Avenue. Participants represented all ages and all racial and ethnic groups. The march was timed to coincide with marches in solidarity with the people of Gaza that are taking place all over the world.

As the marchers moved through the streets they carried signs and Palestinian flags and chanted, “Israel, Israel, you can’t hide. We charge you with genocide.” Or, “Gaza, Gaza, don’t you cry. Palestine will never die.” Many wore buttons supporting the Palestinian liberation struggle. One woman had “Resistance is not Terrorism” printed on the back of her jacket.

A large group of orthodox Jews who oppose the Israeli state marched too. Seeing them, some Jewish people in the streets cursed them and spit at them. They appeared to take it in stride.

At one point a call came in from Kevin Ovington, one of the leaders of the Viva Palestina convoy which was in Jordan with 500 people from 17 countries, and 250 trucks loaded with humanitarian aid for the people of Gaza. Egypt was not allowing them to pass through to Gaza so a hunger strike had begun. He said that they were “determined to enter Gaza and break the siege.” He said, “One day we will all be together in a free Palestine.” The marchers were asked to call the Egyptian Embassy and urge them to allow the Freedom Marchers and humanitarian aid to pass into Gaza.

Outside the Israeli Consulate in New York, the marchers demanded an end to the blockade which protesters argue is a violation of international law.

1 Response to New York : Marching for the Children of Gaza