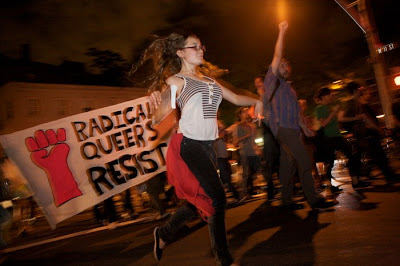 Queers, allies and residents of the park took to the streets and marched to the Stonewall Inn to the applause of people on the sidewalks as we chanted “We will not be quiet! Stonewall was a riot!”

The Radical Homosexual Agenda held its third Parade Without a Permit on the evening of June 19th to celebrate the 40th anniversary of the Stonewall Rebellion. This was the third Parade Without A Permit which started in 2007 when the New York City Police, with help of the City Council Speaker Christine Quinn, created an arbitrary rule that stated that if more than 50 people gathered without a permit, they would be subject to arrest.

We’ve challenged that rule while our openly gay city Council Speaker Quinn continues to side with the NYPD while anointing herself as the leader of the gay community.

With not a drop of rain and in high spirits, we began our march at Washington Square Park. Queers, allies and residents of the park took to the streets and marched to the Stonewall Inn to the applause of people on the sidewalks as we chanted “We will not be quiet! Stonewall was a riot!”

From the Stonewall Inn we continued our march down Christopher Street where onlookers stepped off of the sidewalks and into the streets to join our party. One onlooker stepped to the front of the banner and unleashed his inner baton twirler as the RHA drum core pounded out a rhythm and lead us in the chant, “This street is for faggots. F-A-G-G-O-T-S!”

The NYPD made their presence felt as they trailed behind us in squad cars. We continued down Christopher Street as we marched past an NYPD mobile command unit set up on the street. We marched past a commandeered city bus waiting to be used as a temporary arrest station and a generator with flood lights set up at an intersection to intimidate and harass the queer youth of color who come to the village.

We chanted: “We’re here! We’re queer! We’re fabulous! Don’t fuck with us!” as we crossed the West Side Highway and reached the end of our march at the Christopher Street Piers. But our trip down Christopher Street reminded us of how far we really haven’t traveled from 1969 to 2009.