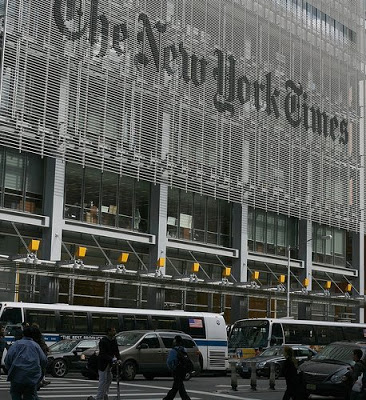 In 1896, Adolph Ochs bought The New York Times and boldly placed on its front-page flag the slogan All The News That’s Fit To Print. Today, its publisher, Arthur Ochs Sulzberger Jr., may need to rewrite that slogan to Less News And Less Money To Print It.

That’s because The Times has fallen on hard times (forgive me). The faltering business model that has strapped financial straitjackets onto other newspapers (witness the Christian Science Monitor ending its print edition) may have finally knee-capped the nation’s best newspaper. It has significant debt coming due, and insignificant cash on hand.

[The company must deliver $400 million to lenders in May of 2009, six months from now. The company has only $46 million of cash on hand, and its operations will likely begin consuming this meager balance this quarter or next. The company has been shut out of the commercial paper market, but has a $366 million short-term credit line remaining that it entered into several years ago, when the industry was strong. It has not yet drawn this cash down, and given the current environment and the trends at the company, we would not take for granted that it will be able to do so. [emphasis added]

Consider numbers we can all understand: In 2002, The Times’ stock price hit nearly $53. On Monday, the last line of a Forbes.com story relayed this telling stat: “Shares in the Times company fell 59 cents, or 6.3 percent, to $8.73 in mid-afternoon trading …” [emphasis added]

The Times‘ suddenly accelerated descent into fiscal disarray has probably irritated Mexican billionaire Carlos Slim Helú. Just two months ago, Mr. Slim bought a 6.4 percent stake of the New York Times Co. at about $14 a share, an investment then worth about $127 million. If he’s still in, he’s lost nearly half his investment.

Recall, please, Mr. Sulzberger’s comment just 21 months ago at the World Economic Forum at Davos, Switzerland, when asked about the future of the print edition of The Times:

I really don’t know whether we’ll be printing The Times in five years, and you know what? I don’t care either.

Bet he cares now. At the time, he said The Times was focused on becoming an Internet news leader, saying it had doubled its online readership to 1.5 million a day to go along with its 1.1 million subscribers for the print edition. But the problem is simple: It may have consistently high readership online, but that’s not translating into sufficient online advertising revenue to meet the expectations of institutional investors concerned primarily with short-term gain.

Here’s the short-term financial picture for the Times company as constructed by Mr. Blodget based on recent NYTCo. filings with the Securities and Exchange Commission:

Other harpies have been snipping at The Times‘ heels. Recall, please, that in January a pair of hedge funds demanded changes at the company:

The trouble, according to Firebrand Partners and Harbinger Capital, is that the New York Times company has moved far too slowly to replace the revenue that is being lost as readership figures come under pressure and advertisers shift their spending from newspapers to the internet. [emphasis added]

Firebrand’s founder, Scott Galloway, wants the Times company to diversify. In a January letter to Mr. Sulzberger, Mr. Galloway wrote: “We believe a renewed focus on the core assets and the redeployment of capital to expedite the acquisition of digital assets affords the greatest shareholder appreciation and creates the appropriate platform to compete in today’s media landscape.” [emphasis added]

Well, good luck with appreciating shareholder value with that acquisition of digital assets. (About.com is highly profitable, so why’s the Times company shopping it around?) Too little, too late. The Times, like virtually every major newspaper company in America, refused to accept the Internet as an effective colleague and instead regarded it only as an ineffective, sure-to-fail upstart. Such arrogance is proving costly.

The news worsens. Nielsen reports that advertising spending for the first half of 2008 declined by 1.4 percent compared with the same period in 2007. Its news on Internet advertising is mixed:

The decrease in image-based Internet advertising was driven by a 27% drop in online ad spending by financial services companies, which decreased their spending from $1.5 billion in the first half of 2007 to $1.1 billion during the first two quarters of this year. [emphasis added]

And that’s the problem for the Times company and every other newspaper company that has placed its business-model bet on sure-to-be-profitable Internet advertising. Despite double-digit growth in online advertising revenue in recent years, that growth isn’t paying off fast enough.

“Total advertising revenue for the newspaper industry is expected to decline 11.5% to $40.1 billion this year,” reports Jennifer Saba of industry trade journal Editor & Publisher. Print ad revenues, though declining, still provide the bulk of the industry’s income. Internet ad revenues, though increasing, will not produce sufficient revenue soon enough to stave off drastic, perhaps catastrophic, changes in the newspaper industry.

In February, reported The Times‘ Richard Pérez-Peña, “The Times has 1,332 newsroom employees, the largest number in its history; no other American newspaper has more than about 900.” When The Times said in February it would cut 100 jobs, its stock immediately rose 86 cents to $18.84. Now it’s under 10 bucks.

The Times, in fiscally happier times (forgive me again), bet big on expansion in New England to maximize revenue. In 1993, shortly after Tim Berners-Lee released the World Wide Web for full public use, the Times company bought The Boston Globe for $1.1 billion. In 1999, it bought the Worcester, Mass., Telegram & Gazette for $295 million. Both deals were roundly criticized as too pricey for value received. Both deals have proven to be financial drains on the Times company. (The Times did not significantly embrace the Internet for several years and made poor decisions. Remember the ill-fated, pay-for-premium-content TimesSelect?)

Early this week, Forbes reported that the company “increased its estimates for how much The Boston Globe and other New England newspapers it owns have declined in value because of reductions in advertising revenue.” That drop in value — $166 million — occurred in just the third quarter. The Times company said the fourth quarter will bring further devaluation of the properties.

Prediction I: The Times will initially follow the industry’s formula: Cut expenses drastically (read: jobs). Seek to at least maintain current share price. Prediction II: The strategy will fail. Prediction III: The Times will sell assets. Prediction IV: That, too, will fail, because the company has insufficient assets relative to its debt and declining ad revenue. In September, E&P reported that the Times company ad revenue had declined 14.1 percent compared to the same period a year ago. Total revenue dropped 8.8 percent for the month.

Could the Times company raise enough cash to take itself private? Hmmm. Perhaps that’s why About.com may be on sale.

All this in a tanking economy. The Times and other newspaper companies shouldn’t bet on traditional big-bucks advertisers — Detroit, real estate, and want-ad classifieds — to come to the rescue. They’ve got problems of their own.

According to Mr. Blodget, the long-term view for the Times company is equally bleak:

Bottom line, long term: Balance sheet carrying values can provide a very misleading picture of long-term asset values, especially for things like land and buildings, which may have appreciated (or depreciated) significantly. As a result, there may be significant embedded value in these assets. But assuming the NYT’s land, buildings, and joint-ventures are carried at something approaching market value, NYTCo has only about $33 million more than it owes. [emphasis added]

The Gray Lady badly needs a Green Mistress, but in an American economy this distressed, that’s unlikely to occur. (Oh, Rupert? You interested in a really good deal?)

So what will the Times company do? Sell assets? In this economy, who will buy? Cut jobs? Assuredly, but at what credibility cost to the journalistic product it sells? End its print editions, and not just that of The Times, but of other papers it owns as well? Newsprint and subscriber delivery are costly. Aside from staff cuts, that seems the most likely — and quickest — route to cut costs substantially.

Any change in the Times company’s business model will influence the readership habits and information needs and wants of millions of people. The Times has been the opinion leader of the fabled Eastern Liberal Elite™ for a century and its front page has influenced daily the contents of hundreds of newspapers nationwide.

Perhaps the changes won’t immediately be so drastic, preserving the print edition. Says Mr. Blodget: The Times company’s realistic options have been reduced to:

Like most newspaper companies, the Times company has proven to be short-sighted in its adaptation to the Internet, its recognition of changing demographics and readership needs and desires, and its dog-on-a-short-leash relationship with institutional investors.

We should hope The Times survives with the quality of its journalism intact (wrong-on-WMDs Judith Miller, plagiarist Jayson Blair et al. incidents notwithstanding). With nearly 100 Pulitzer Prizes to show to the tourists, it’s still the best journalism gig in town.

As the new year approaches, The Times will surely and frequently editorially instruct president-elect Barack Obama on the appropriate means to reinvigorate the American economy.

For links to individual references, to to: Source / Scholars & Rogues