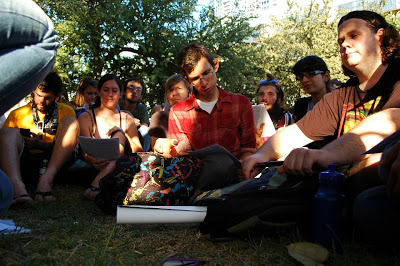 [The Occupy Wall Street movement is often judged by its most visible and dramatic and mediagenic aspects. By the size of its gatherings, by the zanier of its participants, by the occasional acts of civil disobedience, and by the increasingly violent police response. And when there doesn’t seem to be a lot happening, at least not much for the media to cover, the assumption is that the movement is on the wane. And, of course, the occupiers are continually criticized for not having a sharp enough focus, for lacking well-defined and -articulated demands — for being more style than substance.

But there is, in fact, much to the Occupy movement that does not meet the eye, as testified to by Nicole Berland in her article on the Occupy Austin Reading Group. I recently attended one of these gatherings — a lively discussion about economics held outside Austin City Hall and led by The Rag Blog’s Roger Baker. Roger used an article by journalist Chris Hedges, which he distributed to the circle of 25 or so, as a point of departure for a rap session that was of a surprisingly high level. This was a smart and thoughtful — and disciplined — group. And this is a movement with much more substance than you might imagine. — Thorne Dreyer / The Rag Blog]

AUSTIN — When I first heard about the Occupy Wall Street movement, I regarded it with the same attitude I reserve for my fantasies about other important moments in history; it felt distant and impenetrable — a story available only for my passive, albeit passionate, consumption.

So, when I learned that Austin was about to begin its very own occupation, I eagerly took an inventory of which of my skills and interests I could contribute to the cause. I went to a few preliminary general assemblies and sat quietly in the back, understanding that my presence mattered, but feeling nonetheless like dead weight. Here were energetic people who collected donations, organized childcare, and drafted mission statements, but, despite my best efforts, I couldn’t envision myself filling any of these roles.

Then, during one meeting, my mind wandered to a text I had recently taught to a group of college students. In the first book of Gulliver’s Travels, Jonathan Swift maroons his titular character on an island full of tiny people (called Lilliputians), who signify their political affiliations by modifying the height of their shoe heels — a difference that, imperceptible to the comparably gigantic Gulliver, limits each Lilliputian to choosing either one or the other political party, lest he walk with a limp.

I won’t analyze this episode here because I am less interested in telling people what to think than in helping to create environments in which they can explore their own ideas. What my internal digression helped me realize, however, was that I did have one potentially valuable resource that I could easily share with the occupation: my experience teaching literature at the high school and college levels.

At the general assembly that night, an impressive young man named Jorge made a proposal to initiate “discussion circles” starting the first day of Austin’s occupation. I thought these discussion circles could provide a unique opportunity for open dialogue — a space where we didn’t have to follow the common educational model in which experts transmit their knowledge to mostly passive groups of students.

So, with Jorge’s help, I started the Occupy Austin Reading Group, which meets three times a week now. Each meeting features a new discussion leader, who chooses what we will read that day and sometimes poses discussion questions. So far, we’ve read poetry, fiction, theory, iconic speeches, news articles, and an assortment of other texts.

During one meeting, a group member brought in excerpts from Saul Alinsky’s Rules for Radicals, in which Alinsky contends that an organizer should be “sensitive to any opportunities, any handles to grab on to, even though they involve other issues than those he may have in mind at that particular time.” One of the many resources that Austin lacks in comparison to, say, New York, is size, but, true to Alinsky’s model, our little group struggles to turn this seeming disadvantage into an opportunity.

Austin’s occupation is intimate. Sometimes this intimacy generates conflict; political differences can lead to personal differences, which can then lead to people feeling attacked or underappreciated. Other times, the intimacy helps us unify around our tasks or come together to support a community member in need. The reading group tries to tap into this intimacy and use it the best we can. 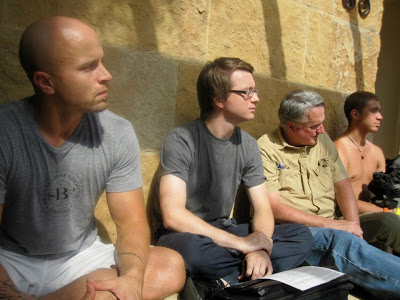 By pinning our conversations to texts, we are often able to step outside of our immediate frustrations to focus on the greater implications of the movement. This, I believe, helps us to deescalate tension and promote positive dialogue — not only with each other, but also with the great thinkers who authored our texts. With some few, and short-lived, exceptions, participants generally respect each other’s opinions, whether or not the opinions square with their own. At this point, many of us have also become friends.

In my few years as a teacher, I learned not to assume that I could predict what would happen in any given discussion. Despite my early dreams of leading classrooms full of eager minds to feel and understand the things I felt and understood, I found a much more enriching reality in which I came to appreciate how defied expectations can sometimes yield the most rewarding results.

Like my first classes, the reading group also continually defies my expectations. At first, I imagined we would spend our time talking about how art informs and is informed by social movements, and, actually, sometimes we do that. More often than not, however, my fellow readers bring in texts that surprise me — speeches by people I’ve never heard of, poems about forgotten massacres, even some old union songs (which we, together, sang). The more and more the group has moved outside of my vision, the happier I’ve become.

This is not to say that the group is perfect. In many ways, I view the reading group as a microcosm of the larger movement. Despite our difficulties, we are growing and adapting because we have the intelligence and motivation to do so. We’ve come together with a common purpose, and we will remain as democratic, flexible, and dynamic as we can.

My hope is not that we keep doing what we’re doing — in the reading group or the movement as a whole. My hope is rather that what we’re doing helps us to create a foundation for a system in which we can listen to each other, educate ourselves, and constantly self-improve.

[Nicole Berland recently moved back to Austin after several years living, studying, and teaching in Chicago. She currently organizes the Occupy Austin Reading Group and watches lots of Star Trek (TNG). She wrote this for the Fringe Blog (“Fringe: The noun that verbs your world.”) Fringe Magazine is currently giving over its blog to the Occupy Movement; they can be reached at FringeTheMagazine@gmail.com.]