NIE: Surge Has Not Put the US on a Path to Victory 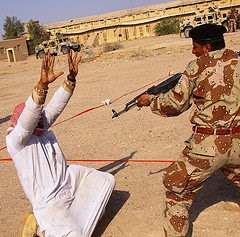 US team warns of fresh ethnic violence in Iraq
By Michael Jansen / October 9, 2008

THE TEAM preparing the latest US intelligence analysis of the situation in Iraq warns that ethnic and sectarian tensions could erupt into fresh violence, reversing security and political advances made over the past 20 months.

The 16 agencies drafting the National Intelligence Estimate, due to be presented to the White House shortly, agree that the “surge” strategy has not put the US “on a path to victory” and questions the wisdom of withdrawing US troops before stability is bolstered by solid political gains on the ground.

According to leaks from the team, the main threats to security come from the ethnic power struggle between Arabs, Turkomen and Kurds in the northern oil city of Kirkuk and from the Shia-dominated government’s refusal to recruit into the security forces Sunni “Awakening Council” fighters who fought al-Qaeda alongside US troops.

The still-secret report also expresses concern over the possibility that the Mahdi army militia loyal to dissident cleric Muqtada al-Sadr could end its ceasefire and resume attacks on US and Iraqi troops.

This assessment echoes a US defence department report issued last month as well as the words of former US commander General David Petraeus. US secretary of state Condoleezza Rice also admitted that “success in Iraq is not a sure thing”.

The leaks from the intelligence report coincided with the publication by the International Migration Office (IOM) of its latest Displacement and Return Assessment Report. This gloomy text shows that, of the 2.8 million internally-displaced persons, i.e. domestic refugees, only 16,782 families with 100,692 members had returned to their homes by September 21st. It also shows that the number of Iraqis fleeing the country, now 2.5 million, exceeds those returning.

The IOM says that although security is improving in many areas, displaced persons are unwilling or unable to go home, and they require food, shelter and other assistance where they are living.

They have not been encouraged to return to their homes by prime minister Nuri al-Maliki’s September 1st decree requiring squatters to vacate houses they “unlawfully occupy in Baghdad or face prosecution”. Those who comply receive $255 per month for six months to tide them over until they find alternative accommodation.

The decree also creates centres in the capital to register returnees, provide them with a grant of $852, and resolve property disputes. While his initiatives focus on Baghdad, Mr Maliki intends to implement these measures in Iraq’s other provinces.

This entry was posted in RagBlog and tagged Iraq, Iraq War, White House. Bookmark the permalink.