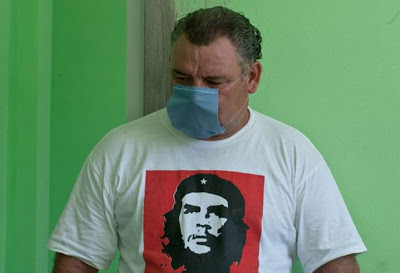 Cuban medic treats cholera victims in Haiti. Photo from AFP / Getty Images.
Cuban medics in Haiti:
Castro’s doctors and nurses are
the backbone of the fight against cholera

They are the real heroes of the Haitian earthquake disaster, the human catastrophe on America’s doorstep which Barack Obama pledged a monumental U.S. humanitarian mission to alleviate. Except these heroes are from America’s arch-enemy Cuba, whose doctors and nurses have put U.S. efforts to shame.

A medical brigade of 1,200 Cubans is operating all over earthquake-torn and cholera-infected Haiti, as part of Fidel Castro’s international medical mission which has won the socialist state many friends, but little international recognition.

Observers of the Haiti earthquake could be forgiven for thinking international aid agencies were alone in tackling the devastation that killed 250,000 people and left nearly 1.5 million homeless.

In fact, Cuban healthcare workers have been in Haiti since 1998, so when the earthquake struck the 350-strong team jumped into action. And amid the fanfare and publicity surrounding the arrival of help from the U.S. and the UK, hundreds more Cuban doctors, nurses and therapists arrived with barely a mention.

Most countries were gone within two months, again leaving the Cubans and Médecins Sans Frontières as the principal healthcare providers for the impoverished Caribbean island.

Figures released last week show that Cuban medical personnel, working in 40 centers across Haiti, have treated more than 30,000 cholera patients since October. They are the largest foreign contingent, treating around 40 per cent of all cholera patients. Another batch of medics from the Cuban Henry Reeve Brigade, a disaster and emergency specialist team, arrived recently as it became clear that Haiti was struggling to cope with the epidemic that has already killed hundreds.

Since 1998, Cuba has trained 550 Haitian doctors for free at the Escuela Latinoamericana de Medicina en Cuba (Elam), one of the country’s most radical medical ventures. Another 400 are currently being trained at the school, which offers free education — including free books and a little spending money — to anyone sufficiently qualified who cannot afford to study medicine in their own country.

John Kirk is a professor of Latin American studies at Dalhousie University in Canada who researches Cuba’s international medical teams. He said: “Cuba’s contribution in Haiti is like the world’s greatest secret. They are barely mentioned, even though they are doing much of the heavy lifting.”

This tradition can be traced back to 1960, when Cuba sent a handful of doctors to Chile, hit by a powerful earthquake, followed by a team of 50 to Algeria in 1963. This was four years after the revolution, which saw nearly half the country’s 7,000 doctors voting with their feet and leaving for the U.S. 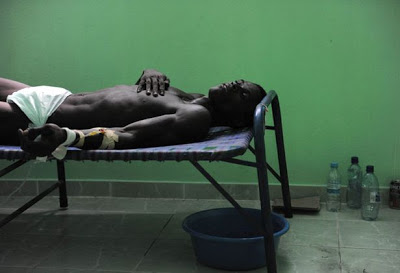 Jacklin Anore, 24, a cholera patient at the Cuban-run Nicolas Armand hospital in Arcahaie, north of Port-au-Prince. Photo from APF / Getty Images.
The traveling doctors have served as an extremely useful arm of the government’s foreign and economic policy, winning them friends and favors across the globe. The best-known program is Operation Miracle, which began with ophthalmologists treating cataract sufferers in impoverished Venezuelan villages in exchange for oil. This initiative has restored the eyesight of 1.8 million people in 35 countries, including that of Mario Teran, the Bolivian sergeant who killed Che Guevara in 1967.

The Henry Reeve Brigade, rebuffed by the Americans after Hurricane Katrina, was the first team to arrive in Pakistan after the 2005 earthquake, and the last to leave six months later.

Cuba’s constitution lays out an obligation to help the worst-off countries when possible, but international solidarity isn’t the only reason, according to Professor Kirk. “It allows Cuban doctors, who are frightfully underpaid, to earn extra money abroad and learn about diseases and conditions they have only read about. It is also an obsession of Fidel’s and it wins him votes in the UN.”

A third of Cuba’s 75,000 doctors, along with 10,000 other health workers, are currently working in 77 poor countries, including El Salvador, Mali and East Timor. This still leaves one doctor for every 220 people at home, one of the highest ratios in the world, compared with one for every 370 in England.

Medical training in Cuba lasts six years — a year longer than in the UK — after which every graduate works as a family doctor for three years minimum. Working alongside a nurse, the family doctor looks after 150 to 200 families in the community in which they live.

This model has helped Cuba to achieve some of the world’s most enviable health improvements, despite spending only $400 per person last year compared with $3,000 in the UK and $7,500 in the U.S., according to Organization for Economic Co-operation and Development figures.

Infant mortality rates, one of the most reliable measures of a nation’s healthcare, are 4.8 per 1,000 live births — comparable with Britain and lower than the US. Only 5 per cent of babies are born with a low birth weight, a crucial factor in long-term health, and maternal mortality is the lowest in Latin America, World Health Organization figures show.

Cuba’s polyclinics, open 24 hours a day for emergencies and specialist care, are a step up from the family doctors. Each provides for 15,000 to 35,000 patients via a group of full-time consultants as well as visiting doctors, ensuring that most medical care is provided in the community.

Imti Choonara, a pediatrician from Derby, leads a delegation of international health professionals at annual workshops in Cuba’s third city, Camaguey. “Healthcare in Cuba is phenomenal, and the key is the family doctor, who is much more proactive, and whose focus is on prevention… The irony is that Cubans came to the UK after the revolution to see how the NHS worked. They took back what they saw, refined it and developed it further; meanwhile we are moving towards the U.S. model,” Professor Choonara said.

Politics, inevitably, penetrates many aspects of Cuban healthcare. Every year hospitals produce a list of drugs and equipment they have been unable to access because of the American embargo which prevents many U.S. companies from trading with Cuba, and persuades other countries to follow suit.

The 2009/10 report includes drugs for childhood cancers, HIV, and arthritis, some anaesthetics, as well as chemicals needed to diagnose infections and store organs. Pharmacies in Cuba are characterized by long queues and sparsely stacked shelves, though in part this is because they stock only generic brands. 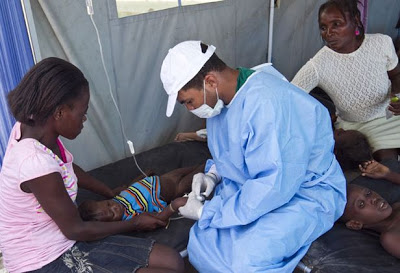 A member of Cuba’s medical brigade working in Haiti. Photo from Getty Images.
Antonio Fernandez, from the Ministry of Public Health, said: “We make 80 per cent of the drugs we use. The rest we import from China, former Soviet countries, Europe — anyone who will sell to us — but this makes it very expensive because of the distances.”

On the whole, Cubans are immensely proud and supportive of their contribution in Haiti and other poor countries, delighted to be punching above their weight on the international scene. However, some people complain of longer waits to see their doctor because so many are working abroad. And, like all commodities in Cuba, medicines are available on the black market for those willing to risk large fines if caught buying or selling.

International travel is beyond the reach of most Cubans, but qualified nurses and doctors are among those forbidden from leaving the country for five years after graduation, unless as part of an official medical team.

Like everyone else, health professionals earn paltry salaries of around $20 a month. So, contrary to official accounts, bribery exists in the hospital system, which means some doctors, and even hospitals, are off-limits unless patients can offer a little something, maybe lunch or a few pesos, for preferential treatment.

Medical training is another example. There are currently 8,281 students from more than 30 countries enrolled at Elam, which last month celebrated its 11th anniversary. The government hopes to inculcate a sense of social responsibly into the students in the hope that they will work within their own poor communities for at least five years.

Damien Joel Suarez, 27, a second year student from New Jersey, is one of 171 American students; 47 have already graduated. He dismisses allegations that Elam is part of the Cuban propaganda machine. “Of course, Che is a hero here but he isn’t forced down your neck.”

Another 49,000 students are enrolled in El Nuevo Programa de Formacion de Medicos Latinoamericanos, the brainchild of Fidel Castro and Hugo Chavez, who pledged in 2005 to train 100,000 doctors for the continent. The course is much more hands-on, and critics question the quality of the training.

Professor Kirk disagrees: “The hi-tech approach to health needed in London and Toronto is irrelevant for millions of people in the Third World who are living in poverty. It is easy to stand on the sidelines and criticize the quality, but if you were living somewhere with no doctors, then you’d be happy to get anyone.”

There are nine million Haitians who would probably agree.

[This article was first published in the British daily, The Independent.]