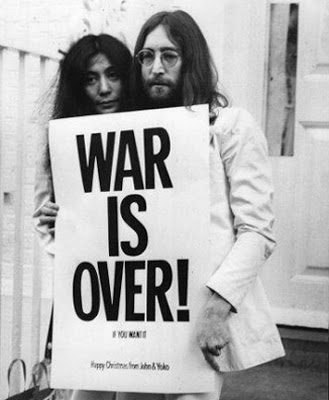 Timmons is known today mostly as a lobbyist for the oil companies, but in 1972 he worked in the Nixon White House as Assistant to the President for Legislative Affairs. Strom Thurmond, the segregationist senator from South Carolina, sent a letter to Timmons in February, 1972, as the Nixon White House was gearing up for the President’s re-election campaign. The letter informed Timmons that Lennon and his friends were “strong advocates” of a program to “dump Nixon,” and that Lennon was planning “to hold rock concerts in various primary election states.” The purpose of the concerts was political: “to stimulate 18-year-old registration” and to urge people to demonstrate against Nixon at the Republican National Convention. Thurmond’s memo to Timmons concluded, “if Lennon’s visa is terminated it would be a strategy counter-measure.”

At the time–spring of 1972–the war in Vietnam was going strong, Lennon was living in New York City and had become a prominent antiwar voice, singing Give Peace a Chance and Imagine at antiwar rallies and concerts.

Timmons wrote back to Thurmond a few weeks later. The “Dear Strom” letter reported that “the Immigration and Naturalization Service has served notice” on Lennon “that he is to leave this country no later than March 15.” It was signed by Timmons “with warm regards.”

The information Thurmond sent to Timmons was correct–it came from the staff of the Senate Internal Security Subcommittee, of which Thurmond was a member. Lennon and his new friends Jerry Rubin and Rennie Davis, who four years earlier had organized the 1968 antiwar protests at the Democratic National Convention in Chicago, were planning a concert tour to mobilize young people to vote in the upcoming election. Of course registering young people to vote was not a crime–but the Republicans were concerned about the “youth vote,” since 1972 was going to be the first election in which 18-year-olds had the right to vote, and it was widely assumed young people were mostly antiwar and thus anti-Nixon.

Nixon’s effort to deport Lennon never succeeded. In the end, Lennon stayed in the United States while Nixon left the White House, resigning in the Watergate affair. But Lennon did curtail his antiwar organizing during the 1972 campaign, on the advice of his immigration lawyer, Leon Wildes, who told him not to do anything to further antagonize the Nixon people.

Timmons left the White House shortly after Nixon’s resignation and founded his own lobbying firm. In 2008 he was registered to represent the American Petroleum Institute, Visa USA, Anheuser-Busch and Freddie Mac. He’s also worked with virtually every Republican presidential campaign, starting with Bob Dole.

McCain’s selection of Timmons ties the candidate to Nixon’s dirty tricks and enemies list. Nixon’s campaign to deport John Lennon was an example of White House abuse of power–the use of the power of the president to punish those who criticized him or opposed his policies.

The Thurmond-Timmons documents were first published in Rolling Stone, July 31, 1975.

The story of Nixon’s effort to deport Lennon was told in the 2006 documentary The US vs. John Lennon and in the book Gimme Some Truth: The John Lennon FBI Files