Nixon: "Our Hand Doesn’t Show On This, Though" 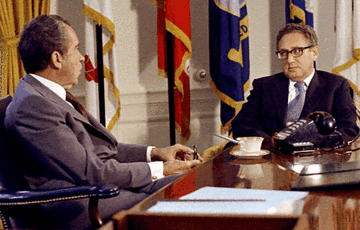 When Henry Kissinger began secretly taping all of his phone conversations in 1969, little did he know that he was giving history the gift that keeps on giving. Now, on the 35th anniversary of the September 11, 1973, CIA-backed military coup in Chile, phone transcripts that Kissinger made of his talks with President Nixon and the CIA chief among other top government officials reveal in the most candid of language the imperial mindset of the Nixon administration as it began plotting to overthrow President Salvador Allende, the world’s first democratically elected Socialist. “We will not let Chile go down the drain,” Kissinger told CIA director Richard Helms in a phone call following Allende’s narrow election on September 4, 1970, according to a recently declassified transcript. “I am with you,” Helms responded.

The “telcons”–telephone conversations transcripts made by Kissinger’s secretary from audio tapes that were later destroyed–captured for posterity all of Kissinger’s outgoing and incoming phone calls during his tenure as national security advisor and secretary of state. When Kissinger left office in January 1977, he took more than 30,000 pages of the transcripts, claiming they were “personal papers,” and using them, selectively, to write his memoirs. In 1999, my organization, the National Security Archive, initiated legal proceedings to force Kissinger to return these records to their rightful owner–the government. At the request of Archive senior analyst William Burr, telcons on foreign policy crises from the early 1970s, including four previously unknown conversations on Chile, were recently declassified by the Nixon Presidential library.

‘The Big Problem Today Is Chile’

September 15, 1970, when Richard Nixon ordered the CIA to “”prevent Allende from coming to power or to unseat him,” has been considered, the starting point of the covert operations that eventually helped topple the socialist government, until now. According to the transcripts, however, Nixon and Kissinger set in motion plans to roll back Allende’s election three days earlier on September 12. At noon on that day, Kissinger called Helms to schedule an urgent meeting of the “40 Committee”–an elite group that oversaw covert operations. And approximately 35 minutes later, in the middle of briefing Nixon on a major terrorist hijacking/hostage crisis in Amman, Jordan, Kissinger is recorded as telling the President: “The big problem today is Chile.”

The transcript of their conversation, kept secret for 35 years, reveals just how focused the U.S. president became on overseeing the effort to block Allende. In that call, Nixon demanded to see all instructions being sent to U.S. ambassador Edward Korry in Santiago; indeed, he ordered that the State Department be alerted that “I want to see all cables to Chile.”

“I want an appraisal of what the options are,” Nixon told Kissinger. When Kissinger told him that the State Department’s position was to “let Allende come in and see what we can work out,” Nixon immediately vetoed the idea: “Like against Castro? Like in Czechoslovakia? The same people said the same thing. Don’t let them do that.”

But Nixon cautioned: “We don’t want a big story leaking out that we are trying to overthrow the Govt.”

Secretary of State William Rogers, who Nixon and Kissinger largely excluded from deliberations over Chile, was similarly sensitive to such a story leaking out. Indeed, the transcript of his conversation with Kissinger two days later underscored just how concerned the State Department was to the possibility that Washington might get caught trying to undermine Chile’s electoral democracy. In their September 14th discussion, Rogers accurately predicted that “no matter what we do it will probably end up dismal.” He also cautioned Kissinger to cover up any paper trail on U.S. operations “to be sure the paper record doesn’t look bad.”

“My feeling–and I think it coincides with the President’s–is that we ought to encourage a different result from the [censored reference],” Rogers conceded to Kissinger, “but should do so discretely so that it doesn’t backfire.” Their conversation continues:

Kissinger: The only question is how one defines ‘backfire.’

Rogers: Getting caught doing something. After all we’ve said about elections, if the first time a Communist wins the U.S. tries to prevent the constitutional process from coming into play we will look very bad.

Kissinger: the President’s view is to do the maximum possible to prevent an Allende takeover, but through Chilean sources and with a low posture.”

The next day, during a 15 minute meeting at the White House attended by Kissinger, Nixon instructed CIA director Helms that Allende’s election was “not acceptable” and ordered the agency to “make the economy scream” and “save Chile,” as Helms recorded in his notes. The CIA launched a massive set of covert operations–first to block Allende’s inauguration, and, when that failed, to undermine his ability to successfully govern. “Our main concern in Chile is the prospect that [Allende] can consolidate himself and the picture projected to the world will be his success,” Nixon told his National Security Council on November 6, 1970, two days after Allende took office.

So far, the declassification of Kissinger’s telcons has not yielded much evidence of phone discussion on Chile as CIA operations to destabilize Allende evolved over the next several years. But at 11am on July 4, 1973, Kissinger’s clandestine tape recorder captured another previously unknown conversation with President Nixon. Two weeks after an aborted coup in Santiago, Nixon phoned Kissinger from his summer home in San Clemente, California, to chat about Allende and the prospects that he might be soon overthrown.

Nixon: You know, I think that Chilean guy might have some problems.

Nixon: If only the Army would get a few people behind them.

Kissinger: And that coup last week – we had nothing to do with it but still it came off apparently prematurely.

Nixon: That’s right and the fact that he just set up a Cabinet without any military in it is, I think, very significant.

Nixon: Very significant because those military guys are very proud down there and they just may – right?

Only ten weeks later, the military did move to overthrow Allende in a bloody coup on September 11, 1973. On September 15, Nixon called Kissinger again. They commiserated about what Kissinger called “the bleeding [heart] newspapers” and the “filthy hypocrisy” of the press for focusing on the Chilean military’s repression and the condemnations of the U.S. role. In this telcon–which was declassified in May 2004–Nixon noted that “our hand doesn’t show on this, though.” “We didn’t do it,” Kissinger replied on the issue of direct involvement in the coup. I mean we helped them. [Deleted] created the conditions as great as possible.”

As Kissinger told the President: “In the Eisenhower period we would be heroes.”

You can see all the new Kissinger documents at www.nsarchive.org.