No Meaningful Evidence of Election Fraud in Iran 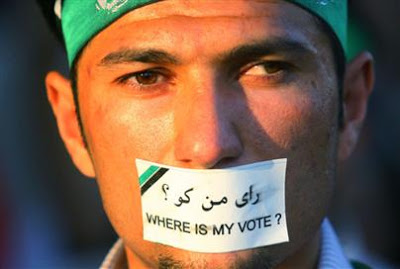 WASHINGTON — Mahmoud Ahmadinejad’s election victory is disbelieved by hundreds of thousands of Iranians who have poured onto Tehran’s streets in protest, but experts say hard evidence of vote rigging is elusive.

Since the government handed the incumbent president a landslide win over opposition candidate Mir Hossein Mousavi hours after Friday’s vote, Tehran has been convulsed by protests unseen since the 1979 Islamic Revolution.

Outside Iran, debate over the election result is split down largely political lines.

Former US presidential candidate John McCain, a conservative, has insisted he is “sure” the elections in Iran were rigged. With equal ferocity leftist Venezuelan President Hugo Chavez has lambasted “foreign efforts” to discredit an “historic” election.

But with few independent observers on hand to witness the vote, analysts warn there is little evidence of a smoking gun of electoral fraud, or evidence that would affirm a fair vote.

Statisticians, pollsters and Iran experts have been poring over the results for hints of vote-rigging, or the possibility that the controversial president is backed by around 63% of voters.

According to Mr. Ballen it is not obvious from that poll that the results of the election were rigged. “At that time Mr. Ahmadinejad was ahead by two to one. Is it plausible that he won the election? Yes.”

The survey showed that 34% of Iranians intended to vote for Mr. Ahmadinejad. Mr. Mousavi was the choice of just 14% of respondents.

But Mr. Ballen cautioned against concluding that the vote was fair.

The poll result fell far short of Mr. Ahmadinejad’s margin of victory, and 27% of Iranians surveyed were still undecided at the time the survey was taken. “Anything could have changed,” Mr. Ballen said.

Mr. Mousavi is from Iran’s Azeri minority, so voters in his native region in East Azerbaijan province were expected to back him to the hilt, according to Ali Alfoneh, an Iran expert at the American Enterprise Institute.

Instead official results showed Mr. Ahmadinejad won the town and Mr. Mousavi’s tally across the province was a modest 42%.

Walter Mebane, a University of Michigan professor, has been examining the election results using statistical and computational tools to detect fraud, a method he describes as “election forensics.”

Comparing 366 district results with those from the 2005 elections, Mr. Mebane concluded that the “substantial core” of local results were in line with the basic statistical trends.

But Mr. Mebane said data released by the Iranian authorities was not detailed enough to say whether the vote was rigged or not.

“The vote counts I see recorded here do connect to reality to some extent, but in no way do I think that any of this analysis rules out the possibility of manipulation,” he told AFP.

Mr. Mebane pointed out that trends would still ring true if the government simply inflated Mr. Ahmadinejad’s vote by a fixed percentage, perhaps offsetting it against deflated opposition tallies.

With half a million people on the streets, proof of such a falsification could spell the difference between a call for justice and a revolution, according to Mr. Alfoneh.

“If the system totally fails to provide documentation that this is not fraud, that is something that is going to radicalize the protesters,” Mr. Alfoneh said.

5 Responses to No Meaningful Evidence of Election Fraud in Iran