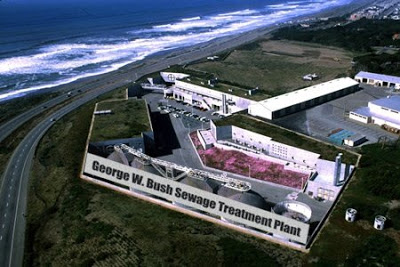 An Honor That Bush Is Unlikely to Embrace
By Jesse McKinley / June 25, 2008

SAN FRANCISCO — Reagan has his highways. Lincoln has his memorial. Washington has the capital (and a state, too). But President Bush may soon be the sole president to have a memorial named after him that you can contribute to from the bathroom.

From the Department of Damned-With-Faint-Praise, a group going by the regal-sounding name of the Presidential Memorial Commission of San Francisco is planning to ask voters here to change the name of a prize-winning water treatment plant on the shoreline to the George W. Bush Sewage Plant.

The plan, naturally hatched in a bar, would place a vote on the November ballot to provide “an appropriate honor for a truly unique president.”

Supporters say that they have plenty of signatures to qualify the initiative and that the renaming would fit in a long and proud American tradition of poking political figures in the eye.

“Most politicians tend to be narcissistic and egomaniacs,” said Brian McConnell, an organizer who regularly suits up as Uncle Sam to solicit signatures. “So it is important for satirists to help define their history rather than letting them define their own history.”

Not surprisingly, those Republicans in a city that voted 83 percent Democratic in 2004 are not thrilled with the idea. Howard Epstein, chairman of the ever-outnumbered San Francisco Republican Party, called the initiative “an abuse of process.”

“You got a bunch of guys drunk who came up with an idea,” Mr. Epstein said, “and want to put on the ballot as a big joke without regard to the city’s governance or cost.”

The renaming would take effect on Jan. 20, when the new president is sworn in. And regardless of the measure’s outcome, supporters plan to commemorate the inaugural with a synchronized flush of hundreds of thousands of San Francisco toilets, an action that would send a flood of water toward the plant, now called the Oceanside Water Pollution Control Plant.

“It’s a way of doing something physical that’s mentally freeing,” said Stacey Reineccius, 45, a software consultant and entrepreneur who supports the plan. “It’s a weird thing, but it’s true.”