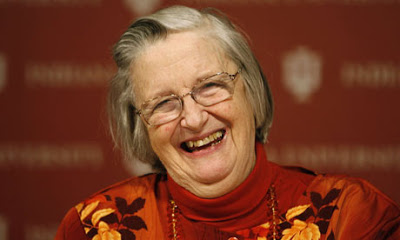 The economics profession needs to be shaken up. Ostrom’s Nobel prize should encourage us to take a fresh approach

The economics profession is in such disarray that one of the Nobel prizes in economics this year went to political scientist Elinor Ostrom — the first woman to be awarded the economics prize. This is an excellent choice (in any year) not only because of what Ostrom has contributed to social theory but also because of how she goes about her work.

In a nutshell, Ostrom won the Nobel prize for showing that
privatising natural resources is not the route to halting environmental degradation.

In most economics classes the environment is usually taught as being the victim of the “tragedy of the commons”. If one assumes, like many economists do, that individuals are ruthlessly selfish individuals, and you put those individuals onto a commonly owned resource, the resource will eventually be destroyed. The solution: privatise the commons. Everyone will have ownership of small parcels and treat that parcel better than when they shared it.

Many environmental experts also reject the tragedy of the commons argument and say the government should step in.

Ostrom says the government may not be the best allocator of public resources either. Often governments are seen as illegitimate, or their rules cannot be enforced. Indeed, Olstrom’s life work looking at forests, lakes, groundwater basins and fisheries shows that the commons can be an opportunity for communities themselves to manage a resource.

In her classic work Governing the Commons: The Evolution of Institutions for Collective Action, Ostrom shows that under certain conditions, when communities are given the right to self-organise they can democratically govern themselves to preserve the environment.

At the policy level, Ostrom’s findings give credence to the many indigenous and peasant movements across the developing world where people are trying to govern the land they have managed for centuries but run into conflict with governments and global corporations.

Some economists on the frontier of their discipline have started to use Ostrom’s insights in their work. In their recent book Reclaiming Nature: Environmental Justice and Ecological Restoration, James Boyce, Liz Stanton and Sunita Narain, show how communities in Brazil, India, West Africa and even in the United States have managed their resources in a sustainable manner when given their rightful access to their assets.

Indeed, Boyce and his collaborators find that communities should be paid for their services, since they can sometimes do a far better job than government or corporations at managing resources. Indeed, “payment for environmental services” has become a buzzword in development circles. Now even the World Bank has a fund for PES schemes across the world.

In terms of methodology, Ostrom proves her findings three times over. As opposed to many economists who never leave the blackboard, Ostrom often conducts satellite analyses of resource depletion to measure amounts of degradation. Second, she actually goes out into the field and performs case studies of human and ecological behaviour all across the world. However, she doesn’t stop there. When she gets back from her fieldwork she conducts behavioural experiments to see if random subjects replicate her findings in the field.

The Nobel committee should be applauded for recognising such rigorous theoretical and empirical work. Shining light on Ostrom is a call to economists to spend a lot more time analysing human behaviour, rather than assuming that we are all rational selfish individuals. It is also a call on economists to become more empirical and to find ways to validate their theories.

Adopting Ostrom’s approach will not only help us forge a better relationship with the natural environment, but will help us become more realistic about the economy in general. It’s time for a fresh approach to both.

This entry was posted in RagBlog and tagged Commons, Economics, Environment, Nobel Prize. Bookmark the permalink.

1 Response to Nobel Laureate Elinor Ostrom : Economics and the Environment