Not a "Criminal?" What’s the Problem? 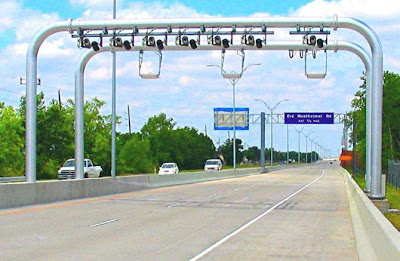 Harris County Toll Road Authority cameras are now on the lookout for more than just those drivers who blow through EZ Tag lanes without paying. County authorities promise new, upgraded cameras can help catch murderers and other violent criminals.

The cameras have the capability to search their databases and issue alerts to county dispatchers when a wanted criminal crosses their lenses.

“We’re going to be catching a lot of bad guys,” said Assistant Chief Deputy Randy Johnson, of the Precinct 5 Constable’s Office, who also serves as the incident management administrator for the toll road authority.

Eleven cameras already are in place and another 24 will be installed by the end of the month.

The toll road authority plans to install cameras throughout the toll system by the end of the year. Five similar cameras are mounted on deputy constables’ patrol cars, Johnson said.

The system, which has been operating for about a month, has proved so promising that the Houston Police Department wants a piece of the action. Harris County leaders next week will consider an agreement that would include the HPD in the county system at no cost.

“This is a good law enforcement tool,” HPD spokesman John Cannon said. “It’s a technology we would be foolish to ignore.”

The license plate recognition cameras are perched on toll booth canopies. As a car passes, the cameras focus on its plates. That information is then checked against a database of chronic toll road violators, as well as more serious criminals. License plates of automobiles involved in child abductions or other missing persons’ cases also are on record.

If the system detects a match, a county dispatcher will be alerted and notify the nearest law enforcement officer.

“If that car is flagged, if it goes through a particular toll or EZ Tag lane, it would immediately be brought to the attention of county employees and constables who patrol the tollways,” Cannon said. “That gives us a better lead than if we did not have that type of technology.”

The county has been successful using cameras to track toll road violators, but the new cameras can do both. The system had been tested at one site on Texas 249 for about three years, Johnson said.

“It’s been a slow process, but we’re there now,” he said.

Red-light cameras installed at 50 Houston intersections will not be used in the same way as the tollway authority’s cameras, Cannon said.

“Red-light cameras are strictly used for traffic enforcement,” the HPD spokesman said. “That’s not what they were designed to do.”

Law enforcement agencies’ use of cameras has generated privacy concerns, as when the city rolled out its red-light camera program.

Some consider the use of the cameras as yet another imposition on privacy, said Adam Gershowitz, a South Texas College of Law criminal law professor. Privacy rights, however, are not owed to people in the middle of a public road, he said.

“The counter argument is: That’s the first step. What happens after that?” Gershowitz said.

Source.
Thanks to Harry Edwards / The Rag Blog

And, some online responses from Chronicle readers:

How could any liberty loving person be for this? So you are ok with the government putting a chip in your head so they can find you if you “Ever Become a Criminal”. Next you would be ok with the govrenment reading your thoughts (yes test are being done now to read brain waives).

After all if you have nothing to fear, why care? You are getting a divorce and the govrenments thought detectors read your mind when you cheated (not to mention listened to your phone calls and read your emails, and had credit card data for supporting evidence). It is not about catching the bad guys. Is about our freedoms, which are being taken away as we speak.

A life under governmental surveillance is a far scarier thing to me than the actions of most criminals.It’s amazing to me what our society is increasingly willing to give up for a false sense of security.

Step by step, inch by inch, the United States of American is becoming a police state. There are too many sheep and not enough free thinkers in this country to turn back the tide that will surely destroy us all. All it will take now is one more 9/11 type event and all hope will be lost.

Read all the responses here.

This entry was posted in RagBlog and tagged Civil Liberties, Privacy, Transportation. Bookmark the permalink.