Not All Iraqis Are Satisfied with the SOFA* 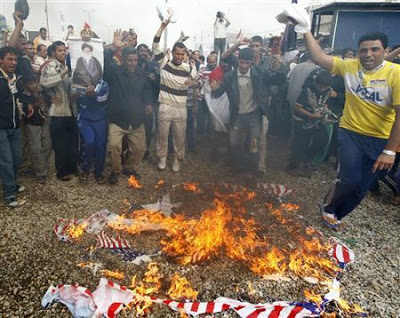 BAGHDAD — A suicide bomber killed 12 people in an Iraqi mosque on Friday while thousands of followers of anti-American Shi’ite cleric Moqtada al-Sadr demonstrated in Baghdad after parliament passed a pact allowing U.S. troops to remain through 2011.

Some 9,000 people protested in Baghdad’s Shi’ite slum of Sadr City after Friday prayers, burning a U.S. flag and holding banners reading “No, no to the agreement.” About 2,500 people held a similar rally in the southern city of Basra.

“I express my condolences to the Iraqi people on this grave occasion, in which they are harmed by the … pact of shame and degradation,” Sadr, whose militia has fought U.S. troops many times, said in a statement read to followers on his behalf.

Sadr told his followers to wear black to mourn the passage of the deal, under which U.S. troops will withdraw from Iraqi towns and cities by mid-2009, and leave the country by the end of 2011.

The U.S. military said the bomber killed eight people and wounded 15 others as they queued outside the mosque to enter for Friday prayers.

U.N. officials say such attacks are aimed at provoking renewed sectarian fighting between minority Sunni Arabs, once affiliated with al Qaeda, and the majority Shi’ites who are now in charge of Iraq.

In central Baghdad a suicide car bomber killed two people and wounded 14 others, police said, and in Sadr City a roadside bomb targeting a U.S. patrol wounded one person, the U.S. military said.

Sadrist lawmakers opposed the security deal with the United States to the last, banging desks and chanting slogans during the parliamentary session that passed it on Thursday. 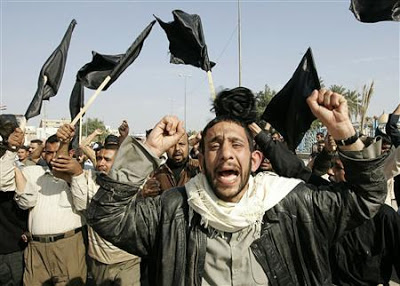 Demonstrators chant slogans as they march during a rally after Friday prayers in Kufa, south of Baghdad, November 28, 2008. Photo: Ali Abu Shish/Reuters.

They consider the U.S. military presence an occupation and want an immediate withdrawal.

In the first comments by a senior Iranian figure since the passage of the pact, Ayatollah Ahmad Jannati, who heads a powerful constitutional watchdog, said Washington had forced its passage with pressure and threats.

“Yesterday, this pact was finally approved despite the … problems it had. This ratification was not a normal one,” Jannati, head of the Guardian Council, told Friday prayer worshippers in Tehran in a sermon broadcast on state radio.

He likened its signing to “somebody standing over your head with a sword,” saying Washington had threatened to indirectly overthrow the Iraqi government if it was not ratified.

Iran, which enjoys close ties with Maliki’s Shi’ite-led government, has repeatedly blamed the United States for the violence and bloodshed in Iraq in the last five years.

Under the security pact, the United States will no longer be able to hold Iraqi suspects detained during the insurgency and around 16,000 mainly Sunni Arab prisoners will have to be handed over to Iraqi authorities or released.

Human rights group Amnesty International said thousands could face torture or possibly execution as a result as the pact provided no safeguards for prisoner rights.

Nor does the security deal mention 2,000 members of Iranian exile group the Mujahideen Organization of Iran, who have been housed at Camp Ashraf north of Baghdad for two decades. They could face execution if sent back to Iran, Amnesty said.

This entry was posted in RagBlog and tagged Iraq Occupation, Iraq Withdrawal. Bookmark the permalink.