Note to Self : Pot May Actually HELP the Memory 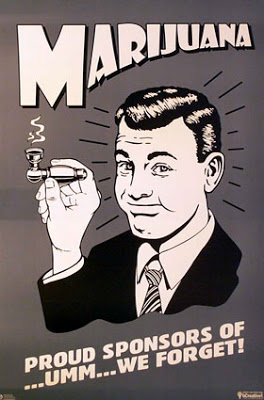 OR NOT!!
Researchers at Ohio State say that THC ‘can reduce inflammation in the brain and might even stimulate the production of new brain cells.’
By Mary Ann Roser / November 19, 2008

How many Baby Boomers have blamed pot smoking for their forgetful middle-aged memories?

As a Boomer myself, I was surprised to read this today: Researchers at Ohio State University say they are accumulating mounting evidence that certain properties in a legal drug that mimics marijuana can be good for the aging brain and might prevent Alzheimer’s disease. They contend that properties like those in tetrahydrocannabinol — or THC, the active ingredient in marijuana — can reduce inflammation in the brain and might even stimulate the production of new brain cells.

It is believed that chronic inflammation in the brain contributes to Alzheimer’s disease, according to a news release about the research on EureakAlert, a resource for journalists.

“Could people smoke marijuana to prevent Alzheimer’s disease if the disease is in their family?” asked lead researcher Gary Wenk, professor of psychology at Ohio State. “We’re not saying that, but it might actually work. What we are saying is it appears that a safe, legal substance that mimics those important properties of marijuana can work on receptors in the brain to prevent memory impairments in aging. So that’s really hopeful.”

So far, his team has shown that a man-made THC-like drug can improve memory in rats. But that’s not the same thing as proving it works in humans, which will take more time and more research.

And here’s another caution: The research has not been published. It merely is being described in a poster presentation today at the Society for Neuroscience meeting in Washington, D.C. But that’s a first step, and it’s interesting.

1 Response to Note to Self : Pot May Actually HELP the Memory