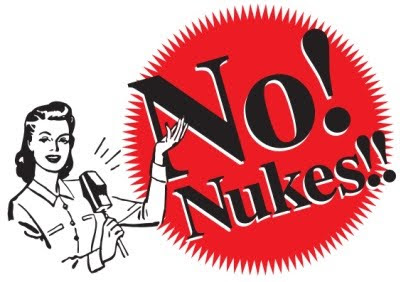 Graphic from Symon Sez.
Nuclear industry tells Vermont
(And everybody else): Drop dead!

The nuclear power industry is sending a clear and forceful message to the citizens of Vermont: “Drop Dead.”

The greeting applies to Ohio, New York, California and a nation under assault from a “renaissance” so far hyped with more than $640 million in corporate cash.

As angry citizens in Vermont and downwind New Hampshire and Massachusetts are told their worries have no place in a reactor renaissance, the message to “drop dead” has spread.

In Ohio, the infamous Davis-Besse reactor has turned up — again — with potentially catastrophic defects. In 2002 Davis-Besse came within a fraction of an inch of a catastrophic melt-down when boric acid ate nearly all the way through the reactor pressure vessel. Now assemblies that guide rods into the reactor core are again cracking. Davis-Besse’s owner, First Energy, is ignoring demands from terrified downwinders that the nuke be permanently shut.

In New York, Entergy’s Indian Point is leaking inside and out. Entergy continues to resist public demands for shut-down or a definitive clean-up.

In California, Pacific Gas and Electric is pushing hard to extend the operating license for its Diablo Canyon reactor, ignoring public demands for a three-year project to map earthquake faults that run within three miles of the plant.

None of which seems to phase an industry and administration that want the public to pay for still more.

Politically, economically, ecologically, and in terms of the public health, the message from the “nuclear renaissance” to the American people is perfectly clear: “Drop Dead.”