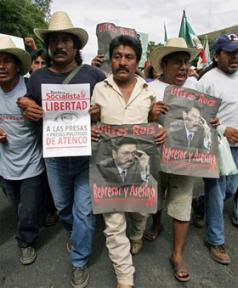 Members of the Oaxaca People’s Popular Assembly (APPO) take part in a demonstration against Oaxaca’s governor Ulises Ruiz in Oaxaca on Nov. 5, 2006. At least a dozen people have been killed in the area since the protest movement began. Photo by Alfredo Estrella / AFP / Getty Images.
In villages across Oaxaca, where land has been owned communally for centuries, paramilitary groups are doing their bloody part to change the scene.
By Theresa Kleinhaus and Maya Schenwar / July 8, 2008

OAXACA and CHICAGO – On April 30, in the small village of Santo Domingo Ixcatlan, in Oaxaca, Mexico, a group of armed men from the paramilitary group the “White Guards” pulled over the car of carpenter Gustavo Castaneda Hernandez, a villager and vocal opponent of the sale of Santo Domingo’s communal land. The group, led by Freddy Eucario Morales Arias, the ex-mayor of Santo Domingo, rapidly blocked off the entrance and exit to the road with pickup trucks. The men began beating Hernandez, still trapped in his vehicle. They then set the car on fire. Hernandez was burned alive.

Meanwhile, two other villagers, Inocencio Medina Bernabe and Melesio Martinez Robles – a leader in the defense of communal land – rushed onto the scene, ostensibly in an attempt to aid Hernandez. The armed group killed both men, then dismembered Robles from the waist down and dragged his body through the street. The attackers lingered on the scene, drinking alcohol and listening to music for approximately six hours, witnesses said.

At 2:30 a.m., the State Preventative Police arrived on the scene, detained no one, and permitted all the armed men to return to their vehicles and drive away. The police had close affiliations with Arias. Under the former mayor’s guidance, from 2005 to 2007, the village had converted the local community center for children into a new headquarters for the State Preventative Police. Arias remains closely associated with the group.

Since the assassination, several more residents of Santo Domingo have been threatened. The community frequently hears gunshots at night and the paramilitaries – civilian groups armed and ordered by the government – have announced to the people that there will be further executions.

“Never in my 51 years have I seen anything like this,” a long-time Santo Domingo resident told Truthout. “Our community was always a peaceful one until Freddy Eucario Morales Arias came to power.”

However, this story of a village struck by government-entangled violence based on land disputes is, tragically, increasingly common in Oaxaca.

Only 29 percent of land in Oaxaca is privately owned – the rest is controlled by some form of collective system. In places like Santo Domingo, all agrarian issues are decided by those who work the communal land. Many government figures would like that reality to change, according to Suzy Shepard-Durini of the Council on Hemispheric Affairs.

“It would be in the interest of the government for communal land to be sold because the government can heavily tax any land that is not communal,” Shepard-Durini told Truthout. “Officials can also profit off the land by charging the people who live there fees for use of that land. If the natives don’t have legal ownership of the land, it is easy to exploit them or threaten them with relocation.”

Although it is unclear what specific economic interest the government holds in Santo Domingo’s land, the ongoing state-supported violence indicates that the government stands to profit from a sale, according to Maurilio Santiago Reyes, of the Center for Human Rights and Advice for Indigenous People.

“This type of conflict is not uncommon in Oaxaca,” Santiago Reyes told Truthout. “One part of the community wants to sell and another does not; the government gets involved and makes matters worse.”

The turmoil in Santo Domingo originated from a conflict between the village and its neighboring town, Chalcotongo de Hidalgo, over a piece of communal land. The federal government offered to buy off participants in Santo Domingo’s communal land organization, “bienes comunales,” but most community members refused to abandon their way of life for a sum of money.

“We prefer to conserve our land,” one villager told Truthout. “We prefer to use this land agriculturally. If we sell, maybe a factory comes, they have the capital and we do the work. But if we conserve the land, we own the land, and we also work it.”

Several judicial orders have declared the land to be the property of Santo Domingo Ixcatlan.

In the state of Oaxaca alone, there are 656 similar documented agrarian conflicts. Of those cases, 53 are considered to be “hot spots,” or at great risk of developing into armed conflict.

During his tenure as mayor, Arias took over a portion of the land that is in conflict and began storing weapons there. Only Arias’ armed paramilitary followers were allowed inside that area. Arias then sought to sell the land in conflict to Chalcatongo. The current mayor of Chalcatongo, Guadalupe Susan Ruiz, is the cousin of Ulises Ruiz Ortiz, the governor of Oaxaca, with whom Arias also maintains ties, according to a piece written by his wife, published in La Jornada, a leading Mexican newspaper.

The government’s discontent over land ownership coincides with a rise in paramilitary violence, particularly in heavily indigenous areas.

“[Paramilitaries] act as a large fan of practices and processes of criminalizing social protest, with the purpose of containing the discontent of indigenous farming people,” the editorial states.

The Santo Domingo tragedies follow the usual course of much Mexican paramilitary intervention: Arias trained his followers in a state-sponsored military program, approved by the Oaxaca state government. When the Santo Domingo-Chalcotongo land dispute arose, Arias kicked into gear, planning to reward his paramilitary followers’ activism-suppressing efforts with 40 percent of the contested land and sell the other 60 percent to Chalcotongo, according to a Santo Domingo resident.

“Those paramilitaries want to push out anyone who does not want to sell the land to Chalcatongo so they can receive the government money,” he said.

The power – and routine use – of paramilitaries has risen in recent years, especially since Ruiz Ortiz became governor.

Ruiz Ortiz was widely criticized for his militarized response to striking teachers in Oaxaca City in 2006. Several people were killed and hundreds were arbitrarily detained. Since that time, the Popular Assembly of Oaxacan Peoples, a large social movement comprised of many civil society groups and governed by traditional indigenous leadership systems, has continued to call for Ruiz Ortiz’s resignation.

Santiago Reyes told Truthout that although the paramilitaries existed before the current governor’s rise to power, their influence has never been as blatant as during Ruiz Ortiz’s term.

Back in Santo Domingo, Arias is moving through a series of legal proceedings. Yet the town’s residents doubt much retribution will be served, especially since Arias maintains connections to Oaxaca’s governor.

Several weeks ago, police investigating the April assassinations were expelled from the community by the paramilitaries, leaving no police in town. Residents feared a nighttime massacre, ill-assured by the presence of the State Preventive Police – the same force that dismissed the assassinations at the scene of the crime. These days, Oaxacans find it difficult to trust any group linked to the state government to carry out peacekeeping duties.

“The Oaxaca state authorities have repeatedly used excessive force, sometimes lethal, to disperse protests against the controversial state governor,” states a late June report issued by Amnesty International. The report also correlates with Santo Domingo’s residents’ doubts that Arias will be fairly prosecuted, stating, “Those responsible have not been brought to justice.”

Meanwhile, last week, a group of paramilitary families who live on Santo Domingo’s disputed land came down the mountain and fired guns in the town square. All of those opposed to Morales Arias and his paramilitaries gathered in one house for safety.

So far, the Mexican federal government has not met with the people of Santo Domingo or taken any security measures on their behalf. Governor Ruiz Ortiz recently did meet with residents, and denied any connection to Arias, despite the statements of Arias, villagers, Reyes and Arias’ wife. Ruiz Ortiz also claimed that the conflict was merely one between two municipalities, and not a political struggle involving the state government or paramilitaries.

Mexican federal officials have not returned Truthout’s requests for comment.

“The government of Ulises Ruiz will never underestimate the importance of this subject,” said Encar Manuel Zamora Dominguez, a state official in charge of “agrarian reconciliation,” at a July 1 press conference.

Villagers across Oaxaca view such statements as doublespeak, pointing to the paramilitary-stoked and government-funded violence that persists in Santo Domingo and beyond.

[Theresa Kleinhaus is a peace activist and law student in Chicago, Illinois. She is working for the summer in Tlaxiaco, Oaxaca. Maya Schenwar is an editor and reporter for Truthout.]