Obama and a Brave New World : Governing a Netroots Nation 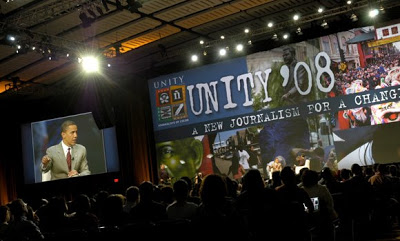 Obama addresses journalism convention in July, 2008. Photo by Jennifer Dronkers / Unity News.
‘Obama isn’t just trying to make government more transparent by posting online videos of himself or his transition team’s doings. He is attempting to organize his campaign supporters into a political force that he can tap in tough times.’
Joe Garofoli / November 24, 2008

During the campaign, the Obama team showed how new media tools can be used to win the White House. Now, the president-elect’s advisers and allies are previewing how they intend to use the power of online organizing to govern.

The effort gained national visibility when President-elect Barack Obama started posting YouTube videos of his weekly national address, and it accelerated as the transition team and others solicited supporters’ ideas on what to do next with their “movement.”

Analysts say Obama isn’t just trying to make government more transparent by posting online videos of himself or his transition team’s doings. He is attempting to organize his campaign supporters into a political force that he can tap in tough times – like when he needs to go around Congress and the mainstream media for direct citizen support.

“Just like people hadn’t used the Internet in campaigning to this extent before, they haven’t really used it to govern before,” said Peter Daou, Internet strategist for Sen. Hillary Rodham Clinton. “The challenge here is trying to figure out how to use something that was used mostly for campaign advocacy – and use it in a way to advance policy.”

That’s tricky. A campaign runs on an adrenaline rush fueled by a deadline (election day), a person to rally against and the rush of daily polls. Shepherding policy through Washington is not as sexy, and now the candidate is president of all Americans – not just his supporters.

So on the grassroots level, the legions of Obama supporters who self-organized on social networking sites are reconvening to figure out what to do. Meanwhile, the incoming administration is trying to figure out how to engage its supporters and solicit their ideas – and continued support.

“Where they meet in the middle somewhere is where the energy will come from,” Daou said.

Those efforts intensified last week when Obama campaign manager David Plouffe asked the estimated 11 million members of Obama’s e-mail list what new ideas they had for the administration. Before asking supporters to complete a brief survey, Plouffe wrote, “Your hard work built this movement. Now it’s up to you to decide how we move forward.”

The survey asked supporters “how they would like to be engaged” and to rank the importance of “goals for this movement” such as “Helping Barack’s administration pass legislation through grassroots efforts” and “training volunteers in the organizing techniques we used to elect Barack.”

The efforts extend beyond the official Obama organization.

On Thursday night, MoveOn.org – whose members supported Obama – held more than 1,200 offline “Fired Up and Ready to Go” parties. The point of the gatherings, according to an invitation from MoveOn: “We’ll launch a new campaign to help Barack win big changes – like health care and clean energy.” The group will follow Thursday’s meetings with a day of personal lobbying on Capitol Hill and in congressional district offices Jan. 21, the day after Obama is sworn in.

The 5 million-member liberal online hub has seen its membership transformed this year. MoveOn gained 2 million new members in the past six months – 55 percent of them are not white. (Membership was 85 percent white before.) At least half of the newcomers are under 35, said executive director Eli Pariser.

Unlike past political campaigns, where voters returned home after casting their ballots and waited for politicians to deliver results, many Obama supporters are looking for ways to continue to provide their input and offer help.

“It’s clear to MoveOn members that they want to continue to focus on a few core issues,” Pariser said.

In addition to posting the president-elect’s weekly addresses on YouTube, the Obama transition team is posting snippets that describe the activities of some of its transition groups. A three-minute video titled “Inside the Transition: Energy and Environment Policy Team” that recently appeared may not sound like scintillating viewing, but it does give viewers a peek into the mind-set of the incoming government.

“He doesn’t have to wait for CBS to use four seconds of one of his speeches as a sound bite in a story. He can send his full comments directly to his supporters – and everyone else,” Pariser said.

But Obama’s early efforts on YouTube have not been in the two-way spirit of new media communication – comments are not accepted, although people can repost the videos or embed them elsewhere and start their own conversation threads.

“I’m not sure of the strategy behind that,” said Steve Grove, YouTube’s head of news and politics. “They’re probably trying to feel out how it will work.”

If the Obama administration is anything like the Obama campaign, Grove predicts it will produce a prolific amount of video. He wouldn’t be surprised if Cabinet officials and other top administration leaders began posting videos, too. And, even though “day-in-the-life” videos may be hackneyed, Grove said there would be an audience for such a behind-the-scenes peek at the White House.

Obama’s YouTube channel had more than 1,800 videos during the campaign, and they were viewed 110 million times. Many posted after September were seen upward of 50,000 times each and more than a dozen were seen at least 1 million times.

“Their user base has come to expect a certain level of accessibility,” Grove said. “But the challenge will be to find that sweet spot now that they’re governing. There has to be a certain imprimatur and gravitas when the president of the United States is involved.”

There’s no shortage of other ideas on how to engage people online. During the campaign, Obama officials talked about ways to create a “Craigslist for service” – where people interested in doing some sort of public service or volunteering could be connected with a need in their community. Others have spoken about video streaming all open government meetings. Daou said to expect a lot of “trial and error over the next few months as the White House sees what works.”

“What’s most important is that he makes government more transparent,” said Raven Brooks, executive director of Netroots Nation, the annual conference of bloggers and online activists that grew out of the popular DailyKos political blog.

Brooks’ idea: He would love to see Obama – or more likely an aide – use the social networking tool Twitter to update citizens on what he is up to throughout the day. “He wouldn’t have to be giving away state secrets or anything, but maybe something like, ‘I just met with Paul Volcker and we talked about monetary policy.’

“Now, the average voter is not a political junkie, and may not be interested in that level of minutiae, but I think a lot of people would appreciate the effort to communicate,” Brooks said.

A spokesman for the Obama transition team said of its new media strategy, “Unfortunately, we’re not ready to discuss further details at this time.”

Perhaps the details will be posted first on YouTube.