Obama and Change From the Bottom Up 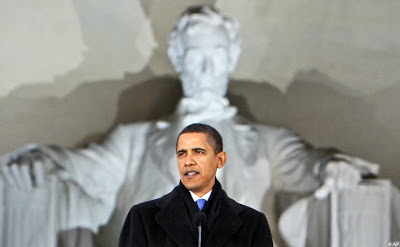 Photo by Helen Livingstone / Financial Times, UK
‘Obama’s election has revealed a far-reaching hunger for change that had been largely unexpressed. Now is the time to start translating this sentiment into activism — because it is only through struggle that the widespread desire for change can become reality.’

THE BUSH days are finally over–dramatically put to an end by the first African American president of a country built on slavery.

With Barack Obama’s inauguration as president on January 20, there will be another wave of the kind of celebration that could be found in cities across the country on Election Night–not only marking the end of a hated regime, but of the history made by its successor.

Millions of people are counting on getting a hearing from the new White House. And that has the new White House…a little worried. Members of the new administration have admitted to the press that they fear hopes in Obama may be running too high–that the millions who celebrated his victory may expect too much, too soon.

In a recent interview, Obama senior adviser Valerie Jarrett said, “You don’t need to have demonstrations in front of the White House to convince this president that there is a disparate impact in the African American community around issues such as health care and education. He’s got that.”

Jarrett’s message appears to contradict the message that Obama carried throughout his campaign–that organizing from the bottom up was the key to progress. “We’re the change we’ve been waiting for,” Obama often said.

But according to Jarrett’s logic, the incoming Obama administration itself will be the agent of change–and because of that, activists don’t need to protest.

Yet a look at U.S. history shows the opposite. Fundamental social change has always come as a result of struggle from below.

On the campaign trail, Obama paid homage to this history with his inspiring campaign rhetoric–complete with references to the sit-down strikers of the 1930s and civil rights activists of the 1960s.

Nevertheless, Obama was the candidate of a party dominated by, and devoted to, the interests of big business. In the White House, he will preside over a vast state machine that’s intertwined with capital in countless ways. He’ll be commander in chief of armed forces that are occupying two countries–Iraq and Afghanistan–and supporting Israel’s war on the Palestinian people. It is this reality that will shape Obama’s policies.

To be sure, Obama has made some important promises–like closing down the U.S. torture center in Guantánamo. He also says he’s willing to sign the Employee Free Choice Act, making it easier for workers to join unions. If he makes good on these promises, it would certainly be a major shift from the Bush administration, which missed no opportunity to attack workers or trash civil liberties.

Nevertheless, Obama himself is warning that we can’t expect all that campaign rhetoric to make it into action. As Obama said in an interview with ABC’s George Stephanopoulos, “George, I want to be realistic here, not everything that we talked about during the campaign are we going to be able to do on the pace we had hoped.”

Thus, in the coming weeks and months, activists will be told that they have to wait for things to improve–to be patient and not expect change overnight.

BUT MANY people understand that our side has to get organized — right now. Protests of thousands around the country to protest Israel’s attack on Gaza are one example. The vibrant new LGBT rights movement that arose in response to the anti-gay marriage Proposition 8 is another.

To understand this dynamic, it’s useful to look back at the election of Franklin Delano Roosevelt in 1932. With the country mired in a catastrophic economic crisis, FDR won because of the repudiation of the Republican Herbert Hoover who came before him. Yet FDR came into office with the not-so-radical plan to balance the budget.

The first steps of the new Roosevelt administration were directed toward restoring U.S. businesses and banks. But as workers became more organized, they successfully pressured FDR to put into effect reforms like the Works Progress Administration jobs program, the National Labor Relations Act guaranteeing the right of workers to organize, and, of course, Social Security.

Similarly, Obama’s election has revealed a far-reaching hunger for change that had been largely unexpressed. Now is the time to start translating this sentiment into activism–because it is only through struggle that the widespread desire for change can become reality.

Historian Howard Zinn made this point in a speech at Binghamton University just after the election:

Why is all the political rhetoric limited? Why is the set of solutions given to social and economic issues so cramped and so short of what is needed…And, yes, Obama, who obviously is more attuned to the needs of people than his opponent, you know, Obama, who is more far-sighted, more thoughtful, more imaginative–why has he been limited in what he is saying?

The key to broadening the political horizons, Zinn argues, is what we do next:

Today’s struggles may seem modest by comparison. But they, too, have the potential to mobilize millions of people to fight for the things they urgently need–from health care reform and organizing unions, to ending discrimination based on race, gender and sexual orientation. The time to fight is now.

3 Responses to Obama and Change From the Bottom Up