Obama Presidency : What the Left Should Expect 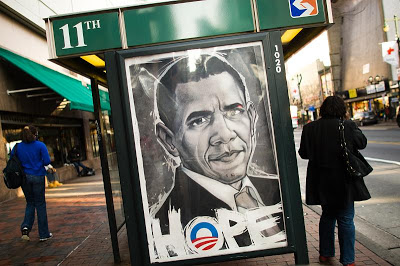 ‘Obama won the presidency with the support of the American left. The antiwar movement was his first national constituency.’
By David P. Hamilton / The Rag Blog / November 8, 2008

What the left should expect from Obama’s first term.

We’re all talking about our expectations for the Obama presidency. Given what he has said he supported during his campaign, what exactly should be our principal expectations?

In the election, Obama won by a margin of roughly eight million votes, many times more than Nader and McKinney combined. Obviously, most of those who consider themselves members of the antiwar movement supported him. Hence, we have justifiable expectations and obviously, what we want has to do primarily with withdrawal from Iraq.

However, now we have a situation where the Iraqi government is on the verge of throwing US troops out of the country anyway by refusing to agree to a status of forces agreement with the US after the UN mandate authorizing US troops there runs out onDecember 31st. Hence, merely pulling US troops out of Iraq is too easy and insufficient and we should demand more.

1.) We want a definitive diminution of American militarism. This should be exemplified by: a.) a much greater reliance on diplomatic negotiations, international organizations and treaties to resolve conflicts between nations (starting with support for the current negotiations between the Karzai government of Afghanistan and the Taliban); b.) the worldwide reduction of US military forces stationed abroad; and c.) a significant reduction of the “defense” budget.

2.) Partial nationalization of the health care industry in order to provide health care as a right to all US citizens.

3.) A very high level of government investment in safe, renewable energy and conservation programs as an alternative to carbon based fuels. This would also be a very large jobs program.

5.) Partial public ownership of “rescued” corporations. If the public bails them out from impending bankruptcy, we should collectively own a corresponding stake in them.

7.) Revocation of the proto-fascist measures taken by the Bush administration, such as the Patriot Act and other domestic surveillance measures. This should include the closing of the prison facility at Guantanamo.

This list could be expanded, but the above demands have all been to some degree endorsed by Obama during his campaign. Basically, we want the expansion of the commons, that which belongs to all of us collectively.

This entry was posted in Rag Bloggers and tagged Obama Presidency, Peace Movement, Progressive Movement, The Left. Bookmark the permalink.

6 Responses to Obama Presidency : What the Left Should Expect