Obama Press Conference : What a Difference! 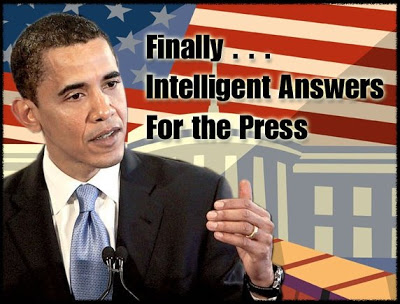 After eight years of George Bush’s evasive, sophomoric and defensive prattle it was energizing to hear a president who clearly knows what he is talking about and who can communicate it in a clear and understandable way.

President Barack Obama’s first prime time press conference should be marked as another historic American moment. Because for the first time in decades we saw an American president patiently, intelligently and completely answer questions from the press.

He genuinely listened to questions from the assembled press corps. Unlike most other presidents since FDR, he took their loaded, presumptive questions and addressed them straight on, with no prepared notes, replying in great, logical detail. His manner was relaxed, persuasive and intelligent.

After eight years of George Bush’s evasive, sophomoric and defensive prattle it was energizing to hear a president who clearly knows what he is talking about and who can communicate it in a clear and understandable way. Never resorting to breezy slang, Obama reassuringly demonstrated his wide grasp of the issues and his ability to analyze them.

Again, it seems clear that the pundits and news guessers continue to underestimate Mr. Obama. Their cheap shots and shallow predictions are hollow. He is intellectually miles ahead of the prognosticators and nay sayers. In only 20 days in office he has shown impressive, thoughtful control after being thrown into in a maelstrom of inherited wars, the GOP’s massive budget deficit, and the prospect of an economic meltdown not seen since the 1930’s.

FDR reportedly had more than a thousand news conferences. Ike was skittish about doing live press conferences and had his recorded for later release. Reagan used his charm as an actor to create a halo effect with the press and public, but he all but stopped press conferences after the damaging heat he took from his Iran-Contra scandal. George Bush Senior became crankier and more confrontational with the press, the worse things got with his one term presidency. Bill Clinton was great with the press, dodging and weaving with long and passionate explanations, but alas, he too shut down his press contacts after the Monica tsunami washed over his desk.

And Little Bush was just a mess. He hated having to submit to actual unrehearsed questions from the press. With no teleprompter to read what someone else had written for him to say, he became twitchy and was likely to say any damned dumb thing. And he did. For eight long years.

That is why President Obama’s cool, sincere and informative responses to the press’s questions were reassuring at a time when America needs reassurance. Mr. Obama was clearly in control of his press conference. He referred to a carefully planned list of those upon whom he might choose to call. Even veteran White House correspondent, Helen Thomas, got a detailed answer to her rather rambling, whiny, loaded question, but she did not get to talk over Obama for a follow up. He nixed that with professional dignity and when it was over, it was over.

There was also an open offer from Obama to the wailing, recalcitrant conservative Republicans who still have not understood the clear message from the American people. His door remains open to talk when and if they ever come to their senses and start to pitch in with good ideas to correct the disaster their policies have largely caused our nation. They may be sorry they passed up the offer if Obama is forced to really play hard ball.

This entry was posted in Rag Bloggers and tagged Barack Obama, Media. Bookmark the permalink.

2 Responses to Obama Press Conference : What a Difference!