Obama: Seize the Moment and Shitcan Your Corrupt and Inept Economic & Military Teams 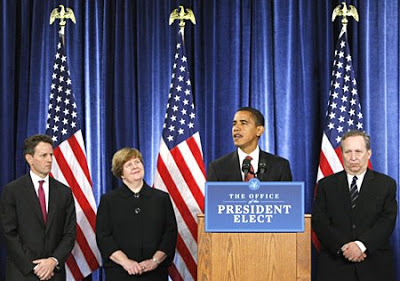 The actions of Obama’s Chief Financial Adviser Larry Summers and his Treasury Secretary Tim Geithner in permitting the payment of $165 million in bonuses to AIG executives (Summers, according to the Wall Street Journal, actually pressed Sen. Chris Dodd, D-CT, to secretly remove a bar to the payment of such bonuses from the bailout bill) and the storm of public outrage that has followed public disclosure of those payments, provides President Obama, whose administration is stumbling badly on many fronts, with an opportunity to turn things around and avoid political disaster.

He should promptly demand Geithner’s and Summers’ resignations, and should also fire the CEO of AIG, Edward Liddy (as 80% owner of AIG, the US has the power to do that anytime). It would also be a good idea at the same time to fire the CEOs of all the leading banks that are at this point surviving on government bailouts.

This would allow Obama to correct the fundamental mistake he made during the transition period following the November election in installing a bunch of Clinton-era economic advisors and Bush holdovers to be his economic team.

The US economy is in disastrous shape, and it is going to take new ideas, and people untarnished by the last 30 years of deregulatory excess and unsavory links to Wall Street, to rescue it. Obama has no shortage of good people to turn to: Nobel economist and NY Times columnist Paul Krugman, former World Bank Chief Economist Joseph Stiglitz and economist James Galbraith all spring immediately to mind as people who could offer new and better approaches to addressing both the immediate crisis and the longer-term challenge of restoring the health of the nation’s economy, and of making it work for everyone, instead of just the wealthy few.

Of course, it could be that Obama is really not interested in radically changing the US economy, and its financial system. He has certainly accepted the tarnished coin of the Wall Street establishment during his campaign, and could simply be doing their bidding, but one has to operate on the hope that this is not the case. After all, the Obama campaign also raised an unprecedented amount of cash from ordinary folks, and if money is influence, he owes those little people big time.

In any event, it seems clear that if this president who spoke during his campaign of “hope and change” continues to cater to the bankers and the corporate interests that want to see no major revamping of the economic system and the regulatory apparatus, he is headed for a one-term presidency–and a sad and failed one at that.

The voters who sent Obama to Washington have been willing to extend him the benefit of the doubt, even when he made his almost uniformly lousy cabinet picks. They were willing to grant that he had been handed a disastrous situation by the last administration.

But as each week passes, the disaster becomes less Bush’s and Cheney’s, and more Obama’s.

The same can be said of Obama’s other big crisis: the two endless wars in Iraq and Afghanistan. Again, Obama has largely retained and accepted the advice of the same people who helped run these huge policy disasters during the Bush/Cheney years, and is buying the basic assumptions of those two wars. He is most certainly not ending the Iraq conflict, and is now talking about leaving as many as 50,000 US troops in Iraq for years–as many as were in Vietnam in the fall of 1965. He is reportedly talking about doubling the number of troops in Afghanistan to over 60,000, and about expanding the war into Pakistan, and not just the tribal areas, but Baluchistan province, a heavily populated part of that country. This latter decision, which could lead to an explosion in Pakistan, and the collapse of the central government, could lead to an huge demand for more US troops in the area–perhaps hundreds of thousands more–and even to India’s entry into the conflict.

This is as outrageous and doomed a strategy as is his economic program of trying to salvage the nation’s zombie banks while nickel-and-diming a “stimulus” program for ordinary people.

He should seize the moment, shitcan his corrupt and inept economic team and sack his military advisers, including Defense Secretary Robert Gates and his Centcom commander David Petraeus, and bring in people who will tell him how to get the US out of both conflicts pronto.

If he fires and replaces his economic and military teams, and announces both a quick end to the Iraq and Afghanistan Wars and the immediate break-up of the country’s big failed national banks and financial institutions, he has a chance to become a great president. If he does not, it is as predictable as the rising of the seas that his presidency will be a failure. We are nearing a point where the American public is going to lose patience with the half measures, the continuing pouring of national treasure down the twin sinkholes of the failed financial institutions and the two endless wars in the Middle East, and the tone-deaf behavior of cabinet secretaries and advisors who don’t have a clue about how average Americans are living these days.

This is President Obama’s moment for action. Firing Geithner and Summers would be a good start.

Americans should make an effort to let President Obama know that they want more than token stimulus programs. (Just consider this: official unemployment is now 8.1 percent, but only 4.5% of American workers are able to collect unemployment benefits, and meanwhile, real unemployment is closer to 18 percent. That’s a lot of hurt, and not a lot of help.)

A good idea would be to join a march on the Pentagon set for this Saturday, March 21, (natassembly.org/MarchOnPentagon.html) and a two-day program of demonstrations against Wall Street set for April 3 and 4 in New York City (www.bailoutpeople.org).

[Dave Lindorff is a Philadelphia-based journalist and columnist. His latest book is “The Case for Impeachment” (St. Martin’s Press, 2006). His work is available at www.thiscantbehappening.net.]

3 Responses to Obama: Seize the Moment and Shitcan Your Corrupt and Inept Economic & Military Teams