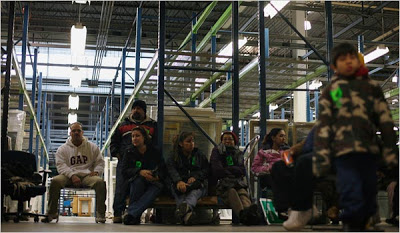 Workers laid off from a Chicago factory on Saturday at what they called an occupation of the plant. They criticized their former bosses, the company’s creditors and the federal government. Photo by Beth Rooney / NYT.

Martin Luther King would be proud.

What a difference a president makes. With a few words, workers protesting move from being at risk of being accused of terrorism to becoming national heroes. It took just a few words from President-elect Obama to set an extraordinarily different tone. Perhaps more than anything he’s done or said, Obama’s response to a question at yesterday’s press conference, announcing his latest appointee, exemplifies, in a palpable way, the huge difference between a president who walks to talk about caring about workers, versus one who stiffly issues empty proclamations.

It looks like the laid off workers in Chicago who are sitting-in at the Republic Windows and Doors factory which gave them three days notices, after, for some, 34 years of dedicated work, represent the beginning of a movement, a message we can not only rally around, but have faith that OUR PRESIDENT supports.

This doesn’t mean that we can assume that Obama will support or approve of any kind of escalation of what the workers are engaged in. But what a concept — a president who hears what protesters say… and then, damn, it brings tears to my eyes, actually supports them.

A little background: The layoff hit 250 workers. Some of them have been staying at, sleeping at the factory since it was closed this past Friday. The The New York Times’ Monica Davey reports,

“They want the poor person to stay down,” said Silvia Mazon, 47, a mother of two who worked as an assembler here for 13 years and said she had never before been the sort to march in protests or make a fuss. “We’re here, and we’re not going anywhere until we get what’s fair and what’s ours. They thought they would get rid of us easily, but if we have to be here for Christmas, it doesn’t matter.” ….

The workers, members of Local 1110 of the United Electrical, Radio and Machine Workers of America, said they were owed vacation and severance pay and were not given the 60 days of notice generally required by federal law when companies make layoffs. Lisa Madigan, the attorney general of Illinois, said her office was investigating, and representatives from her office interviewed workers at the plant on Sunday. ….

“…Still, as they milled around the factory’s entrance this weekend, some workers said they doubted that the company was really in financial straits, and they suggested that it would reopen elsewhere with cheaper costs and lower pay. Others said managers had kept their struggles secret, at one point before Thanksgiving removing heavy equipment in the middle of the night but claiming, when asked about it, that all was well.

Workers also pointedly blamed Bank of America, a lender to Republic Windows, saying the bank had prevented the company from paying them what they were owed, particularly for vacation time accrued.

“Here the banks like Bank of America get a bailout, but workers cannot be paid?” said Leah Fried, an organizer with the union workers. “The taxpayers would like to see that bailout go toward saving jobs, not saving C.E.O.’s.” ….

In a statement issued Saturday, Bank of America officials said they could not comment on an individual client’s situation because of confidentiality obligations. Still, a spokeswoman also said, “Neither Bank of America nor any other third party lender to the company has the right to control whether the company complies with applicable laws or honors its commitments to its employees.” ….

“…Throughout the weekend, people came by with donations of food, water and other supplies. The workers said they were determined to keep their action reminiscent, union leaders said, of autoworkers’ efforts in Michigan in the 1930s, peaceful and to preserve the factory.”

The workers were visited by two members of congress — Representatives Luis V. Gutierrez and Jan Schakowsky, both from Illinois, and Rev. Jesse Jackson.

“This is a nonviolent wake-up call to all of America,” the Chicago Sun Times reported Jackson observed. “It’s the beginning of a bigger movement to resist economic violence.”

“When it comes to the situation here in Chicago with the workers who are asking for their benefits and payments they have earned, I think they are absolutely right.

“When you have a financial system that is shaky, credit contracts. Businesses large and small start cutting back on their plants and equipment and their work forces.

“So, number one, I think that these workers, if they have earned their benefits and their pay, then these companies need to follow through on those commitments. Number two, I think it is important for us to make sure that, moving forward, any economic plan we put in place helps businesses to meet payroll so we are not seeing these kinds of circumstances again.”

But let’s take the follow-through on commitments line a bit further. How about congress. They handed, without supervision, $700 billion to Paulson to dole out to his friends in the finance industry. And they’ve taken it and used it to pay dividends, throw parties, invest in buying up smaller operations. Just about everything except helping the people at the bottom– you know the bottom that Obama seems to talk about every time he mentions dealing with the economy from the bottom-up.

It seems to me these heroic, simple folk protesting at the factory may have, perhaps without realizing it, fired the first shot, like the shot heard round the world– one that will get the congress to listen, to start doing things that FIRST take care of we-the-people.

We know that GM is facing bankruptcy not because it didn’t make green cars. It’s because they didn’t listen to consumers and they failed to learn from the Japanese approach to working with workers, treating them with trust and respect. Refusing to recognize the essential importance of theseÂ two bottom-up approaches of the Japanese to the car business, GM took a top-down path that led to certain ruin, without congressional rescue.

But congress is not getting it — the reality that the same top-down mindset in approaching the economic crisis and bailout numbers 2, 3, etc. will not work either.

These factory workers are the flesh and blood victims, whose hearts are bleeding on the factory floor. THEY, have put their thumbs on this travesty, that the big banks get rescued, but the poor, the working, they are allowed to fall through the massive cracks in the net that only helps big corporations.

We need to find some ways to show solidarity with these victims of heartless, shortsighted planning.

We need to DO something local that shows that congress must end its misguided top down simple-minded, quick-fixes. They don’t work.

Obama needs to walk his talk on providing bottom up approaches. His ideas for implementing major infrastructure projects will help those in the construction industry. It’s a start. But between now and then, we need to do more. It’s hard to find anyone who hasn’t already been affected by the economic crisis. We know — Obama just reiterated it yesterday — that things are going to get much worse. We MUST make it clear to congress that handing billions over to big companies that have already shown they are failures is absolutely not the way to get out of the mess. And letting the managers and CEOs who rode their companies to close to death are certainly not the ones who should be given the responsibility of using the hundreds of billions in rescue funds we, the American People or footing the bill for.

There may be a time, not too far down the road, when the the Republic Windows and Doors Factory protest will looked at as a tipping point event that woke up the American people. If that happens, it will be because YOU were inspired and did something locally in the next two or three days.

[Rob Kall is executive editor and publisher of OpEdNews.com, President of Futurehealth, Inc, inventor. He is also published regularly on the Huffingtonpost.com and is a columnist with Northstarwriters.com.]