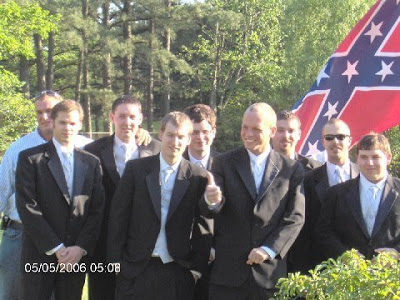 Since co-founding “The Political Cesspool” in 2005, Edwards has become a golden boy in white nationalist circles and his show has served as the primary radio nexus of hate in America. Its sponsors included the white supremacist Council of Conservative Citizens (CCC) and the Institute for Historical Review (IHR), a leading Holocaust denial organization. And its guest roster for 2007 reads like a “Who’s Who” of the radical racist right, including such people as the leader of the CCC, Gordon Lee Baum; Holocaust denier and IHR chief Mark Weber; neo-Nazi activist April Gaede; and anti-Semitic professor Kevin MacDonald. The show’s most frequent celebrity racist guest is former Klan leader and neo-Nazi ideologue David Duke, who has logged three appearances.

Several months after the SPLC article, a promotional piece about ‘The Political Cesspool’ circulated around White Supremacist forums, including a list of ‘luminaries’ that James Edards had interviewed during one month alone on his radio show:

Corsi’s upcoming appearance on Political Cesspool is his third appearance on the white supremacist radio show. His other appearances include July 20, 2008 and November 15, 2007.

Media Matters has compiled a full list of racist remarks about African-Americans and Jews posted by Edwards on his blog.

The announcement for Corsi’s guest appearance on The Political Cesspool reads as follows:

The Political Cesspool 8/17/08 (TN) 04:00PM (CST) SOARING TO NEW HEIGHTS
Don’t miss today’s live broadcast as we make an announcement of epic proportions! Joining us on this monumental broadcasts as guests will be Nigel Farage, Chairman of the United Kingdom Independence Party (UKIP) and Dr. Jerome Corsi, author of the runaway best-seller, The Obama Nation. Dr. Corsi’s book debuted at #1 this week on the NEW YORK TIMES Bestseller List and is available at finer bookstores nation wide. (link)

While it should go without saying, the ramifications this holds for the broadcast and print media are profound. While the media has widely reported that Corsi was the author of a previous ‘Swift Boat’ smear campaigns against John Kerry, major media outlets have yet to report Corsi’s affiliation with white supremacist radio.

News of white supremacist ties to an author of a book maligning Senator Barack Obama’s candidacy for President deserves to be a top story within hours of its being reported.