Obama’s Change and the Bush Mess : Have We Forgotten to Remember? 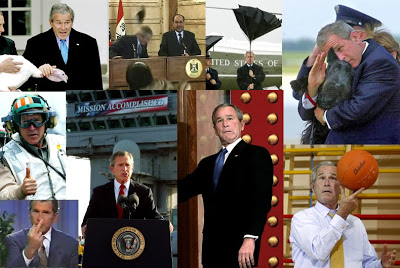 Photo montage by Larry Ray / The Rag Blog.
Remembering why we voted for change:
The Bush mess and the blame game

Eight years of Bush, Cheney, and the cynical political puppetry of Karl Rove, succeeded in driving a deep polarizing wedge into the heart of this country.

The montage of photos above is not a cheap humorous poke at George W. Bush. It is, instead, a montage of reminders of who ran this country into the ground for eight years as our president leaving a Gordian mess for someone else to deal with.

How could we so quickly forget those almost daily blunders, gaffes, petulance, and national disgraces we endured? George W. Bush has all but disappeared inside his tony gated community in Dallas. The mess he is responsible for has not disappeared and blame for it should not be craftily assigned to the new occupant of the White House.

It seems to be human nature for us to want to forget times that were embarrassing, damaging, and disappointing. And after the Bush legacy turned out to be a jaundiced irresponsible house of cards, it seems easier for many to develop near hysterical rage at the mess itself rather than at those responsible for it.

Bush’s historic damage could be a national rallying point, like the ruins of the twin towers, pulling us together to work for national change with patience, sacrifice, and understanding. Instead the damage itself has turned into a cheap political blame game. A kick-me sign for the angry and deluded.

Eight years of Bush, Cheney, and the cynical political puppetry of Karl Rove, succeeded in driving a deep polarizing wedge into the heart of this country. Bush projected to the entire world an “our way or the highway” tough guy attitude. Great sound bites, but his “way” made a mockery of truth, reason, and the law.

Sadly, that “join the posse and let’s go shoot up the bad guys” invitation was simple and appealing to lots of Americans. And it still is to a certain group. Suddenly it seemed, we were off to round up and hang Saddam Hussein before you could say “there ain’t no weapons of mass destruction.”

Unfortunately, the Bush folks with their “shock and awe” invasion had not gotten around to figuring out how to pay for that war. They later decided the U.S. would use its big credit card, expecting the Chinese and other foreign buyers to buy our debt to pay for it. Mission accomplished… again.

At the end of the eight year commute from Crawford, Texas, to Washington D.C., huge piles of lifeless post-Bush toxic fat cat Wall Street gambling debt began to smell and grow. Leaders of the party that happily allowed it to happen began to deny they caused the problem — that somehow it was all the new administration’s fault for recklessly spending so much money and trying to “do too much.”

The funereal visage of Republican minority leader, Senator Mitch McConnell, sternly casting the blame on the new president is pure Republican looking glass politics. Obama and and his political HAZMAT team hit the ground his first day in office trying to deal with a sea of red ink and the fiscal flotsam swirling around in it. A grave potential for another great depression loomed. Welcome to the Oval Office.

But those who sanctioned their party’s role in letting Wall Street bring our nation to the brink of a major depression immediately began loudly blaming the new leadership for all the problems. That kind of old, cheap political role-reversal tactic should make concerned Americans very angry. But chaos, loss of income, and an almost adolescent expectation of some sort of instant fix makes many reassign blame somewhere, anywhere.

A large majority was eager to welcome the new “Change We Can Believe In.” But before the outgoing tenants could leave town, eight years of hidden party trash and dirty Wall Street linen that had been stuffed out of sight burst the seams of the White House for all to see. It was important to the outgoing leadership that the new tenant somehow be blamed for the irresponsible, out of control problems.

Kentucky Senator McConnell and the unified “No” vote chorus he conducts began immediately to try to fix the new horse race. Using latent and not so latent racism present in so many of their party, as well as so-called independents, they began a steady attack on the messenger, Barack Obama. Easier to blame the black president whom so many already refuse to accept as “their president” for not having cleaned up everything his first year in office than to pitch in and help with the clean-up. Just say no.

Americans who had been unconcerned about buying things with money they did not have, and who gleefully bought expensive houses for nothing down like there was no tomorrow, were now suddenly losing homes, jobs, savings. Suddenly they are all upset and concerned about the economy and want someone to blame. Memories of eight years of suffering Bush and Cheney abuses have drifted to the edges of today’s short memory span, it seems.

The new guy and all his highly intelligent advisers are telling Americans how tough things are with no sugar coating. Obama explains, in detail, the depth of the problems and calls for tough change. Instead of using vapid four word sound bites that sound so good, Obama tackled the unexpected problems he inherited head on, while also repairing America’s tattered international image. The harsh reality of it all seems to many to be “change they don’t want to believe in.” Everything is now grim and uncertain.

Those in a blind state of denial include many of Obama’s own majority party Democrats who, much like Senator McConnell, want to ignore reality so they can fight for their narrow political interests just like the elephant was not in the room.

Playing a blame game will not haul us out of the huge mess we are in. Taking a minute to reflect on the montage of photos above might, however, help us remember where a majority of this mess came from and why a majority voted for change.

But change rather than sound bites requires a lot more of Americans. Health care for all Americans has been shoved aside for more than 70 years because it requires dedicated support and buy-in. Genuine Republican support in drafting a National Heath Insurance plan could have made that a reality. But it was easier to vote no and play like we are on an all expense paid weekend in Oz. But the curtain has been pulled back.

President Obama clearly believes that a positive American spirit will ultimately prevail. A majority of Americans clearly still want the change they voted for and should not let a small but loud populist uproar from pontificating short-sighted dour losers drown out reason and resolve.

The natural instinct has always been for progressive and truly involved Americans to pitch in and be part of a solution to tough problems. Throwing blind tantrums and brewing up more anger at feel good tea-parties is good only to fill the endless dead space of side-show cable TV.

4 Responses to Obama’s Change and the Bush Mess : Have We Forgotten to Remember?