Obama’s Rhetoric Toward Iran Leaves Something to Be Desired

As far as I am concerned, what this article describes is horrible. Barack Obama shows a clear ignorance of the facts in this matter, and a typical American style of arrogance and belligerence. The most recent National Intelligence Estimate has been routinely suppressed and ignored by the Bush administration, but it bodes ill indeed if Barack Obama also intends to suppress and ignore this document. He should be criticised on this important issue and called to task for continuing to repeat the BushCo lies. 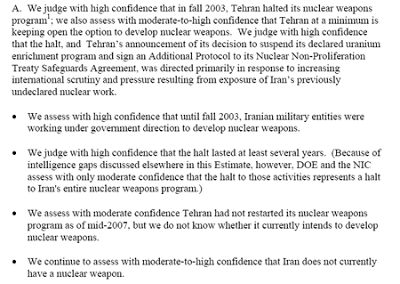 Excerpt from the NIE of December 2007.
Iran must be kept from developing nukes: Obama
November 8, 2008

CHICAGO — An international effort must be made to keep Iran from developing a nuclear weapon, U.S. President-elect Barack Obama said on Friday.

“Iran’s development of a nuclear weapon, I believe is unacceptable,” he said at a news conference in Chicago. “Iran’s support of terrorist organizations, I think is something that has to cease,” he said.

Obama said he would be reviewing a letter from Iran’s President Mahmoud Ahmadinejad, congratulating him on his election, and would “respond appropriately.” But he said the U.S. approach to Iran could not be done in a “knee-jerk” fashion. “I think we’ve got to think it through,” he said.

This entry was posted in RagBlog and tagged Barack Obama, Foreign Policy, Iran. Bookmark the permalink.