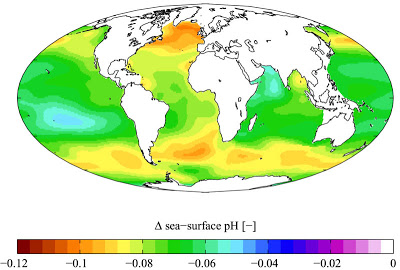 Ocean Acidification due to Increases in Atmospheric CO2
By Paul Spencer / The Rag Blog / June 4, 2008

Not to sound alarmist, but sound the alarm anyway just in case – man-made CO2 and NOx and SO2 emissions may be bad for us. Big news, huh? Only problem is that this bad news is separate from: a) Global Warming, b) Acid Rain, and c) general considerations of breathing. Try ocean acidification.

It’s not a brand-spanking-new discovery, but it has seen very limited publicity in this country. In some ways, however, it is the most far-reaching of the effects of fossil-fuel-based energy production. Much of the world depends on sea critters for survival, and this particular aspect of pollution – seawater acidification – may produce some of the most acute and obstinate damage.

Average ocean pH levels have gone from 8.2 to 8.1 in the last 200 years, according to a recent oceanographic survey. Of course, that sounds like next-to-nothing, but in the context of biochemical reactions that occur in parts-per-thousand to parts-per-million levels, the effect is very large. One of the main chemical events that provide protection for the adults of many marine species (shells, coral) is essentially precipitation of hard solids, guided by organic processes. This precipitation is strongly affected by pH; the ingredients will stay in solution to an increasing extent as the pH is reduced.

If this was just a theoretical discussion, then OK, we’ll get around to actually doing something some day. But that brings us to Australia. Why did the government there suddenly discover the Kyoto Accords about two years ago (even before Bush’ buddy, John Howard, was voted out in favor of Mr. Rudd)? Australia’s cities may be finally seeing the effects of urban pollution, but I think that we all know that people of the governing class are perfectly willing to see the majority of mankind live the last 10 years of their pollution-shortened lives in the misery of gasping for breath due to emphysema, asthma, silicosis, etc.

In my opinion it dawned on Howard, or on his advisors, that there is a problem on the Australian iconic symbol (besides kangaroos and koalas), the Great Barrier Reef. In case you haven’t heard, reefs are dying all over the world. Why? 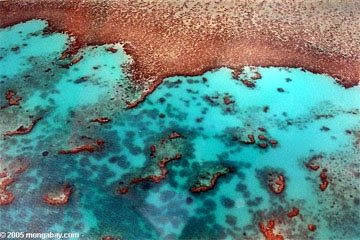 Of course, there are competing and complementary processes (most of which are exacerbated by the same greenhouse-gas emissions): 1) dilution of the salt content of seawater by the melting of the freshwater glaciers; 2) warming of the surface waters of the oceans; 3) pollution by heavy metals and unoxidized hydrocarbons. What are the salient influences? Probably all of the above. But one of the demonstrated – and somewhat stunning – characteristics of the recession of reefs is the weakening (closer to disintegration) of the coral structures themselves.

This was considered a mystery. Some biologists used to regard it as lack of maintenance by the dead coral creatures inside the structures (so what killed them?). My opinion is that the precipitation mechanism has been altered in the direction of dissolution.

In this regard keep one other feature in mind: the average pH has declined 0.1, but in any given locale the effect can be much larger. Average anything is a function of many samples. In this case the samples come from many different ocean ecologies. I don’t have the data, but I would like to see some pH numbers in and around various reefs – both healthy and unhealthy for comparison.

So – where are we? There are some (few) who argue that all of these effects – warming, acidification, die-offs – are cyclical or buffered or self-correcting in some other way. I agree that there are many such processes, and that they are effective to some degree. However, there are thresholds in every process beyond which reactions go to “completion”, rather than dance around some equilibration level – or, at the least, the process changes equilibration level. The effect of acidification on the bottom (the starting point) of the ocean food-chain is not likely to be easily ameliorated, because there are not a whole bunch of excess hydroxyl molecules out there in nature. There are not a lot of natural processes that create bases; combustion of hydrocarbons produces gaseous acid precursors, while the base precursors tend to be solids (e.g., wood ash) that don’t migrate very far and that are produced in much smaller amounts.

Of course, we are all in hopes that the upcoming election will realign national priorities and redirect financial support. I think that this is one arena in which we can exert influence. We have to write and blog and communicate an urgency with respect to development of renewable-source energy production, public transportation, pollution reduction and control, and international cooperation (Kyoto or Kyoto-type treaties). And, of course, we need to renew and enlarge all of the standard energy conservation measures that we should know and practice by now. The Democrats, I think, see these subjects as their natural advantage. We have to keep after them; we have to elevate these matters to the paramount status that they require – along with, of course, the Middle East situation.

This entry was posted in Rag Bloggers and tagged Environment. Bookmark the permalink.