Oh Where is the Jon Voight of Yesteryear… 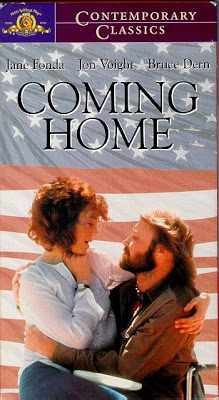 Wing-nut Jon Voight (channeling his late amigo Charlton Heston) warns us that electing Obama will bring about “a socialst era” in America. I doubt it.

He blames it all on school reformer/educator Bill Ayers, us civil rights and anti-war activists, and other assorted, “militant white and black people” who hypnotized him back in the ’60s. I hope my friend and colleague Bill realizes the kind of power he has. Name me one other progressive educator who can single-handedly so influence the course of American politics.

Damn! What ever happened to the Jon Voight in Coming Home, who gave that great speech at the end, to high school students, warning them that the Vietnam war wasn’t all it was cracked up to be?

When I was your age, all I got was some guy standing up like that, man, giving me a lot of bullshit, man, which I caught. I was really in good shape then, man. I was captain of the football team. And I wanted to be a war hero, man, I wanted to go out and kill for my country. And now, I’m here to tell you that I have killed for my country or whatever. And I don’t feel good about it. Because there’s not enough reason, man, to feel a person die in your hands or to see your best buddy get blown away. I’m here to tell you, it’s a lousy thing, man. I don’t see any reason for it. And there’s a lot of shit that I did over there that I find fucking hard to live with. And I don’t want to see people like you, man, coming back and having to face the rest of your lives with that kind of shit. It’s as simple as that. I don’t feel sorry for myself. I’m a lot fucking smarter now than when I went. And I’m just telling you that there’s a choice to be made here.

Maybe he and fellow new-McCarthyites Sol Stern and Checker Finn ought to order it from Netflix, heat up some pop corn, and watch it together.

1 Response to Oh Where is the Jon Voight of Yesteryear…