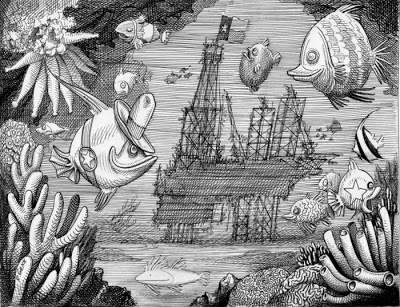 The New York Sun ran this idyllic graphic with its op-ed by Texas state Rep. Myra Crownover, who also owns a drilling company.

Texas state Rep. Myra Crownover — who owns an oil drilling company — asserts that ‘oil drilling in Texas has had no environmental impact.’
By Forest Wilder / August 19, 2008

Did anyone catch [Texas] state Rep. Myra Crownover’s op-ed in the New York Sun on Friday? I doubt there are many readers of the Sun in Crownover’s North Texas district, but the piece wasn’t really intended for her constituents anyway. In her op-ed, Crownover, who co-owns a drilling company, joins the chorus of Republicans screaming “Drill Here, Drill Now.” Even in that crowd — in which pandering and misinformation have been commonplace — Crownover manages to distinguish herself. Crownover argues that Texas has much to teach the nation about “energy, the economy, and the environment.”

Among her boldest assertions is that oil drilling in Texas has had no environmental impact. Crownover writes:

There is debate in Congress right now as to whether the Atlantic and Pacific Coastlines should be opened to offshore drilling. In Texas and the Gulf of Mexico, we have been producing millions of barrels of oil for years with no environmental consequences. Offshore drilling safety is so advanced that even during Hurricane Katrina not one drilling rig in the Gulf experienced a significant environmental event.

You heard the representative: there have been NO environmental consequences from oil production in the Gulf. Zero. Crownover goes on to state that Hurricane Katrina didn’t cause any “significant” environmental problems related to drilling rigs either.

Both assertions are flatly contradicted by numerous media accounts and reports from the federal government, only a Google search or phone call away. Just take hurricanes Katrina and Rita, events that happened in the last three years. For example, a Houston Chronicle investigation found:

[T]he two storms caused at least 595 spills, incidents that released untold amounts of oil, natural gas and other chemicals into the air, onto land and into the water. The quantity and cumulative magnitude of the 595 spills, which were spread across four states and struck offshore and inland, rank these two hurricanes among the worst environmental disasters in U.S. history. Some have even compared the total amount of oil released — estimated at 9 million gallons — to the tragedy of Exxon Valdez.

I called Wilma Subra, the technical assistant for the Louisiana Environmental Action Network (LEAN), to get her assessment of Crownover’s belief that Katrina produced no major oil problems. “There were a large number of rigs totally lost,” she said. “They’re not there anymore. There were a large number of spills. There were pipelines that run from the rigs to the shore that were disrupted. The oil had an impact on aquatic organisms… You can go along the coastal areas and still find residual oil.”

While it’s true that drilling rigs are safer and cleaner than they used to be, spills still occur with some regularity. In 2006, a pipeline linking a rig to the land leaked 21,000 gallons of oil offshore of Galveston. Sometimes oil outfits intentionally and illegally discharge waste into the Gulf. And what about the barge on the Mississippi that recently leaked hundreds of thousands of gallons of fuel oil into the river? Or how about the oil spill from a leaking pipeline in San Leon, Texas that happened just today?

It’s as if Crownover is living in some alternative universe.

But you can’t really blame her. The drilling-is-safe/”not-one-drop-spilled” meme has caught fire in the GOP ranks, bandied cavalierly about by John McCain, Fox News talking heads, and a hundred others who’ve read the talking points. Texas elected officials, who speak with some authority about the oil bidness, have gotten in on the act. For example, Railroad Commissioner Elizabeth Ames-Jones, whose agency regulates the oil and gas industry, writing in the Washington Post, urged federal policymakers to “cast off ’70s thinking and learn from the recent experiences of energy-producing states such as Texas.” The impacts on sensitive areas like ANWR, she said, would be “minuscule.”

Contrary to the belief of some, repeating something that is untrue over and over does not make it true.