Allies of the ‘water protectors’ collect provisions for the harsh winter. 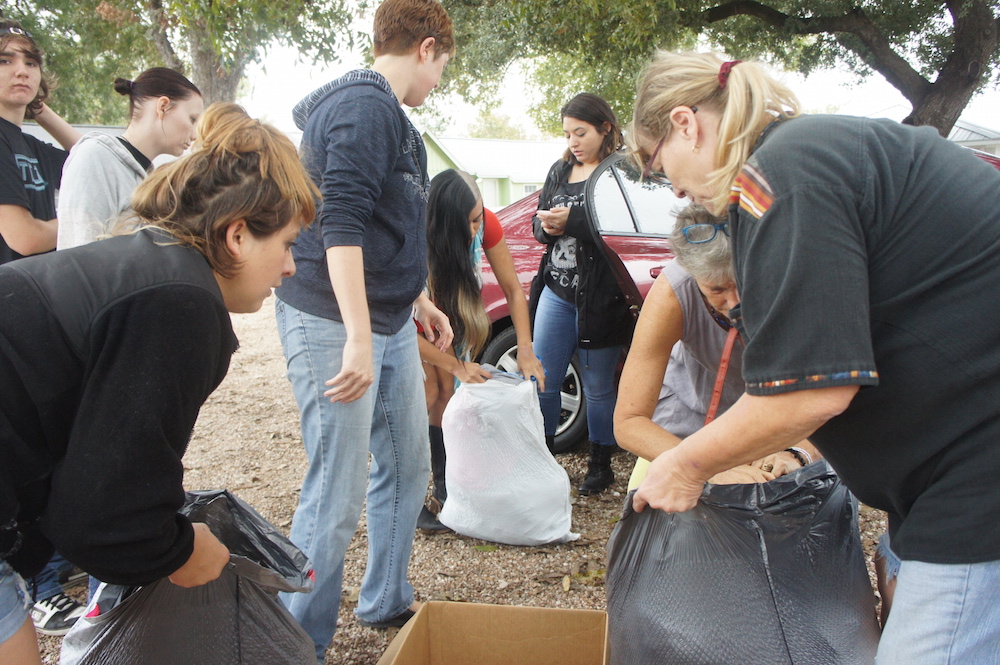 Volunteers coordinate supplies to be delivered to Standing Rock Sioux and their allies. Photo by Omar Rodriguez Ortiz / The Rag Blog.

AUSTIN — People started arriving in the morning with non-perishable food, heavy winter clothing, boots, sleeping bags, tents, and medical supplies, as if preparing for war. An army of volunteers coordinated the arrival of cars, the delivery and sorting of provisions. As it started raining harder and harder, even more people turned up.

With only three days of planning, they met Saturday, November 5, at the Resistencia Bookstore in Austin to aid the fight against the Dakota Access Pipeline (DAPL), a 1,172-mile, 30-inch diameter pipeline that will enable the daily transportation of hundreds of thousands of barrels of crude oil from North Dakota to refineries in Illinois.

Members of the Sioux Nation, along with other “water protectors,” believe the pipeline, which is owned by a Texas-based energy company, could cause irreparable harm to the Missouri River. They have been camping out and protesting for months, and they have been subjected to tear gas, rubber bullets, dog attacks, and mass arrests. But now a new enemy is arriving.

Winter temperatures in North Dakota can go as low as minus 30 degrees Fahrenheit; severe blizzards can rapidly deteriorate living conditions and “unbearable” will fall short to describe the freezing nights in the Standing Rock Reservation. The Sioux and their supporters are in dire need of medical supplies and heavy winter clothing in order to continue protesting peacefully and interrupting the construction of the DAPL.

“Not everybody can make it up to Standing Rock but they can stand up,” says Ohiyesa Locke, 40, who has come out to support the relief efforts in Austin. He was born and raised on the Sioux Reservation. He plays powwow music in his pickup truck, which has decals proudly saying “Standing Rock Sioux Rez.” His black T-shirt reads: “Straight Outta Standing Rock.”

All day at the bookstore, people kept arriving with more supplies. Volunteers quickly organized the last donations and calculated how much money they had received.

The lead organizer of the supply drive, Lisa Pavati, 46, sat on the grass with six volunteers who were planning to make the 20-hour journey to North Dakota to deliver the donations. There was discussion about the details — like how to avoid police road blocks and what to do in case of emergencies.

Pavati has a contact who would help them get medical supplies to the correct tent in North Dakota. Riders are reminded to respect the native culture and always ask: “How can I help?”

Gregory Day, 29, the lead driver, had already made friendships with many Native Americans during his college years. Some are at Standing Rock.

“They are my friends, my extended family. They are unarmed,” said Day, his eyes filling with tears.

Twenty hours later, Day and the group from Austin had arrived in North Dakota.

Twenty hours later, Day and the group from Austin had arrived in North Dakota. They delivered the supplies, including a generator that they bought with a portion of the money collected at the bookstore.

As the crew worked to prepare the camp for winter, Day noticed a considerable number of people visiting the sacred lands as if it were a festival. He calls them “hipster radicals.”

He and other volunteers from Austin want to make sure they are not behaving the same way — but that they are doing the right thing: “I don’t want to do anything without permission. I’m an ally,” said Pavati.

“It doesn’t matter if you are white, black, or Muslim. If you are coming to help, we appreciate it,” said Locke.

The activists still need more heavy winter equipment and the Water Protector Legal Collective is always in need of funds to bail out the arrested and bring them back to camp, according to Day.

The battle against the DAPL will not cease anytime soon. President-elect Donald Trump promised to “unleash America’s $50 trillion in untapped shale, oil, and natural gas reserves.”

Protests were seen across the United States on September 15, including in Austin, to demand the end of the DAPL.

[Bilingual Austin writer Omar Rodriguez Ortiz is a graduate student in the Professional Track Program at the School of Journalism at the University of Texas at Austin. He is in Prof. Bill Minutaglio’s writing and reporting class and is a teaching assistant for Prof. Robert Jensen. Two summers ago Omar and his wife moved from Puerto Rico to Austin.]