Of course, one key issue with this proposal is that UN membership of a whole bunch of nations would have to be revoked for consistency, starting with the US. Can’t see too many folks going along with that scenario. 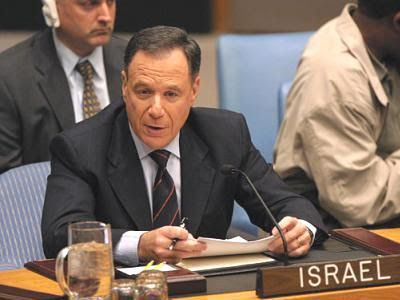 Israel membership at the UN is conditional on its respect for international law.

The Gaza Strip is now the largest concentration camp in the world. The situation grows steadily more insufferable for the 1.5 million Palestinians who live there. Deliveries of food, medicine and fuel are made difficult or stopped altogether. Child malnutrition is increasing. Water supplies and drainage have ceased to function. Children die for lack of healthcare. Tunnels to Egypt, dug by hand, are the only breathing space. Journalists and diplomats are denied entry. Israel is planning more military efforts. The Palestinians in Gaza are now to be starved into surrender and become an Egyptian problem.

The UN should use the word apartheid in connection with Israel and consider sanctions with the former South Africa serving as a model. Miguel dÉscoto Brockman, president of the UN General Assembly, conveyed this message at a meeting on November 24th 2008 with the UN General Secretary Ban Ki-moon present.

Not once, during the past 60 years, has Israel shown any intention of living up to the requirements stipulated by the UN, in connection with the country’s membership in 1948, namely that the Palestinians who had been evicted from their homes should be allowed to return at the earliest possible opportunity. Moreover, Israel holds the hardly flattering world record of ignoring UN resolutions.

It can be questioned from the aspect of human rights legislation whether Israel is a legitimate state. Established practice between states usually requires borders that are legally maintained and a constitution, neither of which Israel has. These requirements are also named in the UN resolution (181) Partition Plan for Palestine, approved by the General Assembly in November 1947. The plan was accepted by the Zionists Jews in Palestine but rejected for excellent reasons as unjust by the Arab states. Only decisions made by the UN Security Council are mandatory. Later on, Israel unilaterally laid claim to a considerably larger portion of land than that suggested by the UN.

The eviction of eighty per cent of the Palestinians who lived west of the 1947 armistice line, and Israel’s refusal to allow them to return is the human rights argument for expelling Israel from the UN. Not only has Israel played the Partition Plan false but has, by its actions, thwarted the grounds – fragile from the start – for its UN membership.

Israel makes use of various strategies to achieve its goals, the same goals as for over a hundred years ago: As few and as well controlled and weakened Palestinians as possible in areas as small as possible between the Mediterranean and the River Jordan. And to try and get acceptance worldwide for the theft of land that is vital to the “state” that calls itself “Jewish and democratic”. This obviously bears no similarity to a peace process.

Why does nobody ever comment on the fact that Israel’s prime minister never misses an opportunity to harp on about how important it is that the rest of the world and the Palestinians recognise Israel, not as a democratic country for all its citizens, but as a “Jewish state”?

What would we have said if South Africa’s Prime Minister, in a similar way, had demanded recognition of South Africa as a “white and democratic state”, thus de facto accepting the racist apartheid system that allowed non-whites to be classified as lesser human beings?

In the article The end of Zionism, published in the Guardian on September the 15th 2003 the Jewish dissident and former speaker of Knesset, Avraham Burg wrote:

“Diaspora Jews for whom Israel is a central pillar of their identity must pay heed and speak out … We cannot keep a Palestinian majority under an Israeli boot and at the same time think ourselves the only democracy in the Middle East. There cannot be democracy without equal rights for all who live here, Arab as well as Jew … The prime minister should present the choices forthrightly: Jewish racism or democracy.”

No support can be found in The UN recommendation concerning a Jewish and a Palestinian state for unequal rights for the citizens of each country. Neither is there any indication as to how a “Jewish” state could become Jewish. There is support, however, for the intention that demographic conditions should be held intact at partition. Interpreting into the text an intention concerning characteristics of a “Jewish state” tailored to the ideology of Zionism is wholly in contradiction with the text of the resolution.

Even the Balfour Declaration, which entirely lacks human rights status, notes that the Jewish national home in Palestine should in no way encroach upon the rights of the Palestinians. Neither did US President Truman recognise Israel as a Jewish state. On the contrary, he ruled out precisely that formulation before making his decision to recognise Israel.

Thus, the legitimacy of a “Jewish state” so urgently sought by Israel lacks support in international documents that concern the building of the state. Israel’s government is, of course, fully aware of this. Why else would it keep on searching for this recognition?

The UN should now embark on a boycott of the apartheid state of Israel and, with the threat of expulsion from the UN, demand that Israel allows the evicted Palestinian refugees to return in accordance with the UN resolutions 194 and 3236.

With this done, meaningful peace talks can proceed and various solutions be reached for co-habitation with equal rights for all people between the Mediterranean and the River Jordan. No such solution can be compatible with the preservation of a Jewish apartheid state.

[- Snorre Lindquist is a Swedish Architect of, among other things, the House of Culture in front of the Nativity Church in Bethlehem on the West Bank. Contact him at snorre_lindquist@hotmail.com.

– Lasse Wilhelmson is a commentator on the situation in the Middle East, and is a member of a local government in Sweden for 23 years, four of which in an executive position. Contact him at: lasse.wilhelmson@bostream.nu.]

This entry was posted in RagBlog and tagged Israel, Palestine, United Nations. Bookmark the permalink.