One Small Consequence of the War of Terror 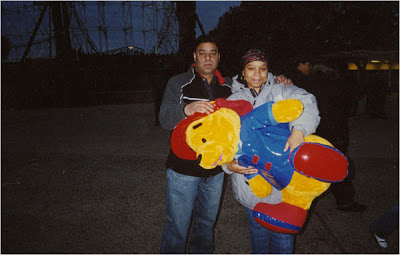 When the 43-year-old man died in a New Jersey immigration jail in 2005, the very fact seemed to fall into a black hole. Although a fellow inmate scrawled a note telling immigrant advocates that the detainee’s symptoms of a heart attack had long gone unheeded, government officials would not even confirm that the dead man had existed.

In March, more than three years after the death, federal immigration authorities acknowledged that they had overlooked it, and added a name, “Ahmad, Tanveer,” to their list of fatalities in custody.

Even as the man’s death was retrieved from official oblivion, however, his life remained a mystery, The New York Times reported in an April article on the case that pointed up the secrecy and lack of accountability in the nation’s ballooning immigration detention system. Just who the man was and why he had been detained were unknown.

Yet at the end of a long trail of government documents and interviews with friends and relatives in New York, Texas and his native Pakistan, there was his name, “Ahmad, T.,” still listed last week on the tenants’ buzzer board at the Eldorado, an apartment building in Flatbush, Brooklyn, where he had lived for years. And the tenant list itself — Jones, Nadler, Mahmud, Fong, Quinones — testified to the long history of American immigration that he had tried so hard to join.

Tanveer Ahmad, it turns out, was a longtime New York City cabdriver who had paid thousands of dollars in taxes and immigration application fees. Whether out of love, loneliness or the quest for a green card, he had twice married American women after entering the country on a visitor’s visa in 1993. His only trouble with the law was a $200 fine for disorderly conduct in 1997: While working at a Houston gas station, he had displayed the business’s unlicensed gun to stop a robbery.

It would come back to haunt him. For if Mr. Ahmad’s overlooked death showed how immigrants could vanish in detention, his overlooked American life shows how 9/11 changed the stakes for those caught in the nation’s tangle of immigration laws.

In the end, his body went back in a box to his native village, to be buried by his Pakistani widow and their two children, conceived on his only two trips home in a dozen years. He had always hoped to bring them all to the United States, his widow, Rafia Perveen, said in a tearful telephone interview through a translator.

“He said America is very good,” she recalled. “When it comes to the treatment of Muslims in the U.S., he had faith in the rule of law. He said, ‘In America, they don’t bother anyone just for no reason.’ ”

When immigration agents burst into Mr. Ahmad’s two-room Flatbush apartment on Aug. 2, 2005, they were looking for someone else, his friends say — a roommate suspected of violating his student visa by working. But they ordered Mr. Ahmad to report to immigration headquarters in Manhattan on Aug. 11.

He went, and was delivered in shackles to the Monmouth County Correctional Institute in Freehold, N.J. His Texas misdemeanor had popped up in the computer as an offense involving a deadly weapon — reason enough, after 9/11, for authorities to detain him pending deportation proceedings.

Like several million other residents of the United States, Mr. Ahmad occupied the complicated gray zone between illegal and legal immigration. Though he had overstayed his first visa, he had repeatedly been authorized to work while his applications for “adjustment of status” were pending. Twice before 9/11 he had been allowed back into the country after visits to Pakistan.

But the green card application sponsored by his Bronx-born wife, Shanise Farrar, had been officially denied in March 2005, leaving him without a valid visa. Although the couple could have reapplied, by the time he was arrested they had not spoken in more than a year, and Ms. Farrar, who had received a letter threatening a marriage fraud investigation, was unaware of his detention.

As she tells it, theirs was an intimate relationship ruined by 9/11. With regret, she recalled her reaction: “I was just cursing him. I was like, ‘You people come here and kill us and mess up our city.’ He was trying to convince me and prove to me that he’s a good man, not those people.”

“I loved him,” she added. “It was just, once the World Trade Center came down, I changed my mind.”

He was a natural immigrant, friends said, the fifth child in a poor but striving family, the captain of his village school’s victorious cricket team who grew into a funny and generous adult. After his family arranged his engagement to his cousin Rafia, he left to work in a brother’s store in Saudi Arabia. But once he visited New York, he had eyes only for the United States.

“His brother called him to come back,” recalled Mohammad S. Tariq, 58, a cabby whose Brooklyn apartment was Mr. Ahmad’s first home in the city. “But Tanveer did not want to go back.”

Instead he followed a job to Texas. He worked the night shift at a gas station that was robbed at gunpoint 7 times in 35 days, said the manager, Kathy Jean Lewis — who married him while she was battling thyroid cancer.

After her recovery, Mr. Ahmad made a three-month trip back to Pakistan, where he wed his cousin in 1998. His marriage to Ms. Lewis, now 53, was annulled by a Texas court in 1999.

She harbors no hard feelings. “He was emotionally supportive when I was sick,” she said, recalling how Mr. Ahmad took her to midnight dinners at her favorite restaurant when she was undergoing radiation treatment. “He just had a very big heart.”

They wed at the city clerk’s office in Manhattan in July 2000, when Ms. Farrar was a single mother struggling to support her young son as a car service dispatcher, and they applied for a green card. She says she did not know he had a wife in Pakistan, and she denies that hers was “a paper marriage,” as Mr. Ahmad’s Pakistani widow put it. Ms. Farrar, 36, still speaks wistfully of family outings to Six Flags Great Adventure and the Bronx Zoo.

Then came 9/11. “Friends and family, ringing my phone — ‘You better watch it, you maybe married a terrorist,’ ” Ms. Farrar recalled, evoking a period when hundreds of Muslim immigrants in New York were swept up on the strength of vague suspicions. “I would bring it to him. He was scared anybody was going to hurt him.”

They patched things up before a November 2002 immigration interview, Ms. Farrar said. But they flunked it — the interviewing agent apparently doubted their marriage was genuine — and never appeared for the second-chance interview in 2003, Ms. Farrar said, because they had split up.

By the time Mr. Ahmad was taken in handcuffs to immigration court on Aug. 17, 2005, all he wanted was to return to Pakistan. He insisted on giving up his right to contest deportation, even though he faced a 10-year bar on returning, said Kenneth M. Schonfeld, an immigration lawyer hurriedly hired by Mr. Ahmad’s friends, all cabdrivers from Pakistan.

“He couldn’t stand the thought of having to stay in custody,” the lawyer said, and he seemed “really terrified” of the Monmouth jail. “It’s a place that would frighten or depress anyone.”

Three weeks later, Mr. Ahmad was dead. Since he had no known health problems, his friends were shocked and disbelieving. They were told that Mr. Ahmad had suffered a heart attack in the jail, and despite all efforts to revive him, had been pronounced dead in a hospital emergency room at 5:51 p.m. on Sept. 9. An autopsy cited “occlusive coronary atherosclerosis.”

His friends did not know that the jail had a history of detainee complaints of medical neglect and physical abuse, and did not allow guards to send detainees to the medical unit without prior approval. Similar complaints have been made about many detention centers, spurring the Obama administration to order a review of the system.

According to the jail’s internal investigation, Mr. Ahmad walked into the medical unit shortly after 3:50 p.m. on Sept. 9 and “was seen immediately.” But the letter scrawled by a fellow inmate contended that before he showed up there, Mr. Ahmad’s pleas for treatment had been rebuffed by a guard for an hour.

Complaints about his death were filed with the Department of Homeland Security’s inspector general, documents show; the matter was passed for internal inquiry to Immigration and Customs Enforcement, with the notation that it need not report back its findings.

By 2007, when the immigration agency compiled its first list of deaths in immigration detention, under pressure from Congress and the news media, Mr. Ahmad’s death was not on it.

Yet if his death was not counted, his arrest was — it had been added to the agency’s anti-terrorism statistics, according to government documents showing he was termed a “collateral” apprehension in Operation Secure Commute, raids seeking visa violators after the London transit bombings.

How his children will remember him is another matter. Without the money Mr. Ahmad used to send, they had to move in with relatives far from his grave in Pakistan. But his 10-year-old son clings to a souvenir, the widow said: “He keeps his father’s photograph in his pocket.”

This entry was posted in RagBlog and tagged Criminal Justice, Immigration, War on Terror. Bookmark the permalink.

1 Response to One Small Consequence of the War of Terror