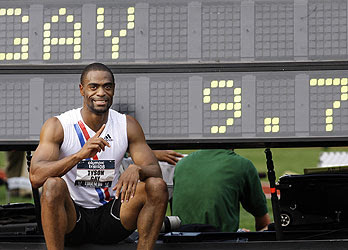 The American Family Association obviously didn’t foresee the problems that might arise with its strict policy to always replace the word “gay” with “homosexual” on the Web site of its Christian news outlet, OneNewsNow. The group’s automated system for changing the forbidden word wound up publishing a story about a world-class sprinter named “Tyson Homosexual” who qualified this week for the Beijing Olympics.

“Tyson Homosexual was a blur in blue, sprinting 100 meters faster than anyone ever has. His time of 9.68 seconds at the U.S. Olympic trials Sunday doesn’t count as a world record, because it was run with the help of a too-strong tailwind. Here’s what does matter: Homosexual qualified for his first Summer Games team and served notice he’s certainly someone to watch in Beijing. “It means a lot to me,” the 25-year-old Homosexual said. “I’m glad my body could do it, because now I know I have it in me.”

And from the Slueth:

Contacted by the Sleuth for comment on the software mishap, American Family Association spokeswoman Cindy Roberts in Tupelo, Miss., told us, “I think it was just a fluke.”

Fred Jackson, news director of OneNewsNow, tells the Sleuth his organization has now fixed the software glitch. “We took the filter out for that word,” he said, without uttering the “G” word.

“We don’t object to the word ‘gay,'” Jackson explained, except “when it refers to people who practice a homosexual lifestyle.” And the “G” word, he says, has “been co-opted by a particular group of people.” (People who are g-a-y.)

The OneNewsNow story about Gay, which was spotted by blogger Ed Brayton at scienceblogs.com, as well as by gay blogs, including PageOneQ, even included these nice details about Mr. Homosexual’s qualifying sprint:

Wearing a royal blue uniform with red and white diagonal stripes across the front, along with matching shoes, all in a tribute to 1936 Olympic star Jesse Owens, Homosexual dominated the competition. He started well and pulled out to a comfortable lead by the 40-meter mark. This time, he kept pumping those legs all the way through the finish line, extending his lead. In Saturday’s opening heat, Homosexual pulled way up, way too soon, and nearly was caught by the field, before accelerating again and lunging in for fourth place.

Other items we’d like to see on the offending web site:

Posted by What Big Implications You Have! / the sleuth / washingtonpost.com