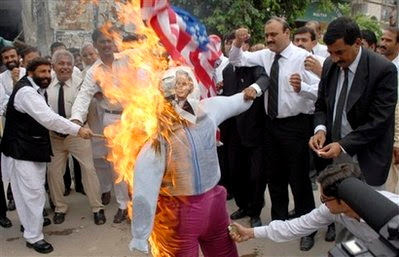 Lawyers in Multan burn an effigy of President Bush during a protest against U.S. attacks in Pakistan’s tribal areas, Sept. 6. U.S. forces have conducted a raid inside Pakistan in the first known foreign ground assault in Pakistan against a suspected Taliban haven. A good number of innocent civilians were killed.

“The gesture from Pakistan is immensely important. The country simply cannot stand idly by and allow foreign invasions … For Washington, these deaths are nothing more than ‘collateral damage.’ For Pakistan, they amount to the senseless murder of innocent people.”

The trucks carrying goods and fuel supplies to allied forces based in Afghanistan through the border point at Torkham will no longer roll through Khyber agency each morning. In what is being interpreted as a response to the US ground attack in South Waziristan that killed 20 people, including women and children, orders have been issued to political authorities in Khyber to halt this supply line. Growing unrest in tribal areas and the possibility of attacks on the vehicles is being cited by local authorities as a possible reason for the decision. If indeed this measure has been taken to express anger over the US assault on its territory, it seems strange the Pakistan government has not seen it fit to make a more open announcement to its people. Instead, reports have filtered through to the media from Khyber. The orders have been issued verbally; there has been no clear-cut statement as to the reasons. Public outrage over the killing of innocent civilians and the audacious violation of sovereignty is acute. The government must say how it plans to counter the American actions. The cutting off of supplies, as a concrete action, would appear to be one means to do this. 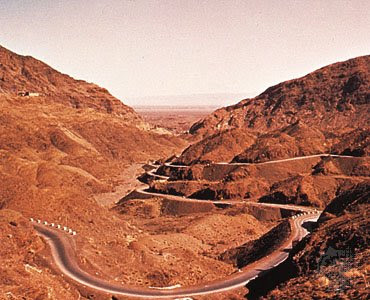 Surely it offered the government an opportunity to prove something was being done. It is uncertain how far the cutting off of supplies will hamper US-led forces in Afghanistan. It seems likely alternative routes to acquire goods can be set up by them, even if this involves greater costs and more complex logistics. But for all this, the gesture from Pakistan is immensely important. The country cannot stand by and allow foreign invasions. The third US attack in three days took place on Sept 5, as US planes bombed North Waziristan. Three children were among those killed. For Washington, these deaths are nothing more than ‘collateral damage’. For Pakistan, they amount to the senseless murder of innocent people. Fury across northern areas is rising. Islamabad cannot allow such US action to go unchallenged. The decision to stop the transportation of goods is one step. It must also be backed by others so the message can get through Washington’s seemingly impenetrable walls.

This entry was posted in RagBlog and tagged Pakistan, U.S. Military. Bookmark the permalink.