This matter becomes all the more urgent with Pakistan moving troops to the Indian border because of the threats coming from that nation over the Mumbai attack. Purohit has some fine suggestions for the incoming administration in order to establish a more realistic relationship with Pakistan and the entire region. 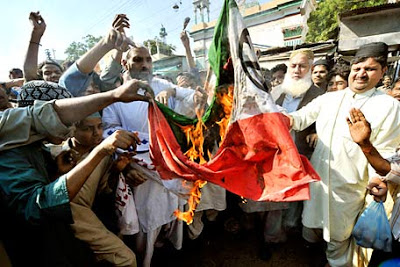 In the space of 10 days, two terrorist actions in South Asia highlighted why President-elect Obama’s desire to adopt a regional approach to the interlinked crises of Afghanistan, India and Pakistan may ultimately rank among the most strategically significant decisions of his administration.

Last month, the world watched in horror as militants brought the thriving metropolis of Mumbai to a halt with a multi-faceted attack on its hotel, entertainment and transportation system. The attacks, dubbed India’s 9-11, saw 188 civilians killed and hundreds more injured. A few days later militants in Pakistan attacked a market place killing dozens of civilians.

Although the attack in Peshawar had a devastating impact on the local populace, it drew less media attention than those in Mumbai, in part due to the lack of international media in that city and also because the Peshawar bombing was one in a long line of attacks in Pakistan in recent months.

Despite the variation in media attention and the way in which they were reported as two distinct stories, it is important that the new U.S. administration looks at the two attacks and the related foreign policy questions holistically. A careful appraisal of the situation suggests that, once in office, President Obama’s administration must adopt a regional approach to the instability in South Asia and also recognize that Pakistan is at the heart of both the crisis and any resolution.

The fledgling democratic government of Pakistan is faced with three interrelated challenges. First, they must address the security situation on their border with Afghanistan where the Taliban is in the ascendancy despite a vigorous Pakistani military campaign. Second, the government must also deal internally with the open sore that is Kashmir. Despite the best efforts of both India and Pakistan to deemphasize Kashmir in public and seek to build confidence between the two countries through other measures, it is clear that Kashmir is a priority issue to a substantial number of Pakistanis, including those involved in the Mumbai killings. Third, the authorities must also battle the militancy within its own border that grew quickly during the reign of General Musharraf.

The Obama administration can assist their Pakistani counterparts in all three of these areas. On Afghanistan, it can bolster the Pakistani government in the eyes of its own people by acknowledging the sacrifice of its military fighting against the Taliban. It can also reduce U.S. drone activity, and by extension reduce civilian deaths, by increasing human intelligence cooperation. U.S. non-military aid can also be a valuable tool in the effort to win the battle for hearts and minds in the tribal border region.

Additionally, the Obama government can force Afghanistan to accept a fixed border between the two countries i.e. the internationally recognized Durand line. Many regional analysts and commentators have urged the U.S. to pressure Afghanistan to accept the line believing that it will increase domestic Pakistani support for vigorous policing of the border and make it harder for the Taliban and others to move freely between the two countries.

President Obama should assign an envoy to begin a dialogue between the two countries on Kashmir. The best efforts of both countries to deemphasize this issue were ended by the Mumbai attacks and it is time to begin a process that resolves the Kashmir question and removes a grievance that militant leaders use to recruit impressionable individuals to their ranks. It is important to note that by endorsing the Durand line and seeking a resolution to the Kashmir crisis, President Obama would also assuage the fears of Pakistani elites who have been nervously sharing a map drawn by U.S.neo-conservatives that sketches out a truncated Pakistan that had lost land to India and Afghanistan. As Jane Perlez noted in the International Herald Tribune:

“One of the biggest fears of the Pakistani military planners is the collaboration between India and Afghanistan to destroy Pakistan,” said a senior Pakistani government official involved in strategic planning who insisted on anonymity in accordance with diplomatic rules. “Some people feel the United States is colluding in this.”

Finally, early in his administration, President Obama should underscore his support for a democratic Pakistan. Historically, democracy has been an antidote to militancy in Pakistan and it will require the engagement of its people to respond to the militants within its own borders.

[Raj Purohit is an independent consultant and associate professor at American University, Washington College of Law. He served as the Director and CEO for Citizens for Global Solutions until July 2008. Prior to joining CGS, Raj was Legislative Director for Human Rights First, where he was responsible for leading the organization’s advocacy efforts in Congress, with a focus on international relations, judiciary and security issues. Raj helped develop and implement new legislative initiatives and lobbying strategies. He also represented Human Rights First in a range of coalitions, including the Washington Working Group on the International Criminal Court, and was a media spokesperson.

Before joining Human Rights First, Raj served as Legislative Director for the National Association of Criminal Defense Lawyers. He has alsoserved as Director of Legal Services at the Center on Conscience and War. Raj received his Bachelor of Laws (LL.B) from Sussex University (1995) and his LL.M. in International Legal Studies from American University, Washington College of Law (1997).]