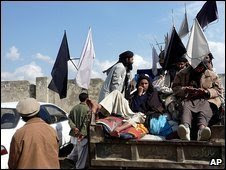 Pakistan’s foreign minister may have welcomed the new Obama regional initiative but the immediate feeling among political commentators was generally one of pessimism.

In Moscow for a conference on Afghanistan, Foreign Minister Shah Mehmood Qureshi said: “I think the new Obama administration’s approach is a very positive approach. They are looking towards a regional approach to the situation.

“Pakistan is willing to play an active, constructive role in this because we feel our peace and security is linked to Afghanistan’s,” he told Reuters news agency.

For Pakistan, the key issue in the strategy review will be the so-called “safe havens” for militants in the Afghan border regions and what the US intends to do about them.

It was what Barack Obama did not say rather than what he did that exercised some analysts.

There was no mention of the increasing US drone missile attacks on militants on Pakistani soil.

[Obama] has also said there won’t be any blank cheques, which means Pakistan will have to do their bidding to earn that money. Rahimullah Yusufzai

“The drift of the speech suggests that drone attacks will increase, and their area may be expanded to Balochistan [province] as well,” leading journalist Rahimullah Yusufzai told Geo TV.

Analyst Zahid Hussain agreed it appeared that “in the coming days the Americans would be more aggressive in the border region, with US troops possibly pursuing the militants into Pakistani tribal areas”.

“This is likely to create more pressure on Pakistan,” he told the BBC.

“Lumping Pakistan with Afghanistan means that Afghanistan’s problems have been heaped on Pakistan.”

Gen Masood said he believed that an increase of foreign troops in Afghanistan would only bring a matching Taleban response.

“So there will be a greater level of militant activity and it will affect both Afghanistan and the Pakistani tribal areas,” he told the BBC.

“This will apparently bring more American focus on Pakistan, with concomitant pressure to take actions which are only likely to increase terrorist activities.”

Gen Masood did welcome the tripling of aid. 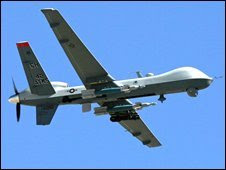 The drone attacks have caused anger among many in Pakistan.

But, as Mr Yusufzai pointed out, it will come with strings attached.

“[Obama] has also said there won’t be any blank cheques, which means Pakistan will have to do their bidding to earn that money.”

He added: “The reconstruction opportunity zones (ROZ) date back to the Bush era, but nothing was done about it. We’ll see if the Americans put it into practice.”

Mr Hussain agreed that the cash would only come “when Pakistan is able to contain al-Qaeda”.

And while cash for infrastructure was important, he said military aid was just as vital.

“Many military officials complain they are obliged to fight the highly-armed militants with peace-time equipment,” Mr Hussain said.

Former Finance Minister Sartaj Aziz summed up a general sense of disappointment, saying the Afghan side of the strategy was “not enough of a change”.

“It is mostly a continuation of Bush policy, the only difference being the addition of US civilian officials being brought in to help boost Afghanistan’s economic and social sectors.”

He added: “If the presidential elections in August go well, there may be some hope for a change, but Obama’s new strategy does not identify any new direction as such which could improve the situation.”