Palin’s Pipeline : Rigged from the Start 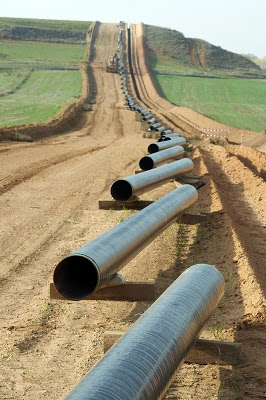 ‘This deal smells like the same old Republican policy of enriching their friends at the expense of American citizens.’
By Ted McLaughin / October 27, 2008

Sarah Palin has repeatedly referred to her approval of a $40 billion natural gas pipeline as evidence of her competence and ability to help solve America’s energy problems. The pipeline would bring natural gas from Alaska’s North Slope to the lower 48 states. But now it looks like it is just more evidence of old-style Republican favoritism.

Before the selection process, Palin had said the process would be fair and without government pre-conditions, but then she set some conditions on the bidding that cut out the gas producers and most other companies. It turns out that those conditions actually favored only one company — TransCanada, the company that was awarded the contract.

Palin had also promised not to talk with any of the bidding companies, but broke that promise by having phone conversations and meetings with several companies, including TransCanada. But then, how can you rig a process for something you don’t understand without talking to the bidders?

And it looks like Palin’s pipeline plan is a really sweet deal for TransCanada. Four years earlier, the company had said it would build the pipeline without a government subsidy. But the Palin plan will give the company up to $500 million in subsidies.

Palin has been telling the American public that she is a maverick — a different kind of Republican that wants to clean up government and make it fairer. It looks like she was lying. This deal smells like the same old Republican policy of enriching their friends at the expense of American citizens.

It’s time to stop listening to Republican lies and boot them out of office.

2 Responses to Palin’s Pipeline : Rigged from the Start