Panning for Gold in a Polluted River 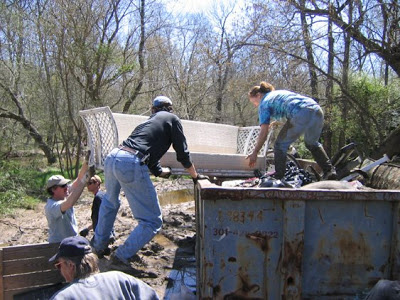 I have only recently discovered your site and I wonder why it took two years of being connected to discover such wisdom and truth. I found you by linking to links that linked to links. I know that younger people call it surfing, but I think of it as panning for gold in a polluted river. Dip after dip into the Internet river, one finds the remains of a once towering mountain of freedom ground into pebbles and dirt under the relentless march of the glaciers of corpo-government. Mixed in with the debris of our freedom is a large amount of unidentified stuff that passes for political thought that has the suspicious odor of fish and frog shit. But the fishy smell of political lies is lost in the overpowering stink of societal and physical toxins that we are forced to bathe in and drink by our corporate masters. The flavor of the brew is getting so vile that it is difficult for even the most thoughtless to keep calling it Kool-Aid.

But back to my original bad analogy, imagine my surprise when I dipped into the river and found the gleaming gold nugget of your insight among the familiar clumps of waste. I yelled YES! — leading everyone nearby in the library to assume that I had finally received my stimulus check and could head to China-Mart to shop.

Not that I received a stimulus check. One key to participating in this placating scheme to pad the numbers of GDP so that the growing depression looks like recession just a bit longer and subsidize the corporations was to have a qualifying income. Even the working poor and retired poor on Social Security got to play the government’s we care so much about your blight — errr plight — that we are giving you real money and begging you to spend it game. Only the non-working poor and chronically unemployed living beneath bridges, camped along polluted creeks in abandoned industrial areas, and existing in rusted cars in the back lot of junk yards didn’t need to help the economy. But then those derelicts would have used it for food or god forbid bought an illegal gun and shot a Republican. Can’t give that much money to people with nothing to lose or some bad shit might ensue.

One other group that didn’t get to play the Spend It for America game this time were those living (I use the term very loosely) on SSI. Since they are paid out of the general fund of taxpayer money (read the working poor’s money) rather than the other general fund of Social Security taxes and because this group of cripples and retards are already reducing the money available for military expenditures and empire building (and few of them vote anyway) the economy doesn’t need to be further stimulated by them. Hell, we give them six-hundred whole dollars a month now and everyone knows that most of them are probably faking being limping dumb asses — unlike lawmakers who really are dumb asses. What do the mentally and physically defective fucks want us to do? Treat them like real people? If we could only kill them (faster than we do) like Hitler did.

Not that I receive SSI. My income for the past eight years has been nearly zero, but I know I am middle class. Frankly I have lived on other people’s waste — as in all that perfectly good stuff that the real middle class throws away to make room to buy more shit. The good news is that since I didn’t have a real job, a car, or desire to buy anything unnecessary, I could spend a lot of time in libraries pursuing my self-education and my carbon footprints looked like mouse tracks among those of elephants (pun intended).

The bad news is that some people don’t care for my idle lifestyle. My wife’s brother who has an IQ about seventy points lower than mine (and I might be kind on those IQ points) comes around occasionally to demand that I go to work and make some money — to give to his sister so he can borrow it, of course. I tell him that only the Fed makes money, the rest of us merely launder it and pass it back to them. It is just unpatriotic as hell to be a non-producing book reader in this society contributing nothing to growth — although all I see growing is ignorance, poverty, and despair.

I do more than just read. A couple of years ago I went to the local Habitat For Humanity to volunteer to help build houses for poor people. I assumed that I would be helping homeless folks get in out of the cold and rain. I also assumed that the organization would be bursting at the seams with liberals and other socialists and commies inspired to do their small part to alleviate the suffering of the poor. Imagine my surprise to find a crowd of right wing Christians pretending to help the poor while helping themselves.

I never made it to a house-build (with all the propaganda and hype shat by the local elite’s press about their god damn righteousness for actually doing something with their hands to help a poor motherfucker out). Of course no one brought attention to the fact that the local managers of the organization (the poverty Mafia) were paid well, gave all their relatives paying jobs, and embezzled and stole everything they could, giving a whole new twist to the Christian expression laying on of hands.

Because I had read a lot of technical books, I was sent to the local Habitat store to repair donated appliances to be sold to raise money to build houses for the poor. I soon learned that the poor in question couldn’t be too poor, dumb, or disabled to get or keep a real job or to qualify for a mortgage. And even though I was welcome to repair stuff and make them money, I was too poor to qualify for the program. So for a year I watched the relatives of the store manager who was the married girlfriend of the married Christian lay minister director load the good shit in the trunks of their cars while the Chinese-made crap went to the floor to be sold to the kind-hearted idiots who knew they were helping the children. For sure some children were helped. The manager qualified for a house — after donating pussy regularly to the director, so her children won’t be in the rain as long as mom keeps whoring for Jesus.

There was one paid employee in the store who was not related to the manager. Besides being the token non-relative, he was also the token non-bible-thumping left wing liberal in our midst, a bleeding heart that had voted for both Gore and Kerry. He talked a good line, but I knew that it was all bullshit one day when I was at the store later than usual and I found him on the back loading dock just before closing with a water-hose wetting the contents of the dumpster. I asked out of genuine curiosity why he was wasting precious fresh water to soak the trash. He replied that a lot of clothing that hadn’t sold had been cleared out of the store and thrown away that day and that if he didn’t wet everything some lazy god damn homeless bum would just steal the shit.

Jesus H. Christ and pass the mustard! We can’t have those homeless assholes fucking up our work to help poor people or slowing down the flow of trash to the landfill. When I confessed that I didn’t quite grasp the logic of intentionally fucking up clothes so really poor people would be discouraged from taking them, he explained that the boss (read born again Christian fascist asshole) feared that dumpster divers (in a tone that made “white trash” sound like a compliment) would turn our dumpster into a homeless bum’s pig trough which could lead to drug addicts and whores sleeping on the loading dock that had a roof of sorts. That would really fuck up the image of a place called Habitat for Humanity.

My left-wing and obviously very Good German friend revealed that the director who also provided spiritual counseling to the local jail population — when the director wasn’t fucking the manager or selling the good shit on eBay that her relatives ripped off from the donations — even had his police buddies come by the dumpster at night to discourage bums from stealing the trash. Only in the ignorant cesspool of America could someone think and act that way while actually believing they are the good and moral people. I terminated my volunteering to the Idiot Fucks For Inhumanity a few days later without bothering to explain that almost all homeless folks owned and understood solar powered clothes dryers.

Anyway, the purpose of this mail was to say that I have really enjoyed engorging myself on your essays these past few days. This was supposed to be a rant about the new debtors prisons in this country, but you know how unpredictable writing and rants can be. Perhaps if my give-a-shit Republican court appointed lawyer saves me from the just doing my duty fascist judge tomorrow morning and wins me a little more time to find a real job in this booming economy (yes, it’s a child support thang), I will return to tell the story. If not, while I pass the time in the pretty new privatized penal facility that someone has the temerity to call a Justice Center for my crime of being poor (read contemptuous), I will know that as long as you are out there contributing to the wakefulness of a few that the wolf in sheep’s clothing has not yet won.

PS: I took this computer out of Habitat’s dumpster two years ago without permission in order to see what this Internet thing was about. So, I obviously do have some criminal tendencies.