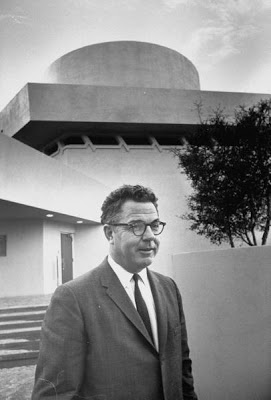 See ‘Paul Baker at Baylor: A student remembers,’ by Jim Simons, Below.

Texas has lost one of its legendary artistic mavericks: Theater pioneer Paul Baker died Sunday [October. 25, 2009] of complications from pneumonia at his Central Texas ranch.

Mr. Baker, 98, was the founding artistic director of the Dallas Theater Center, which he led for 23 of its 50 years. His unconventional ideas about education nurtured such playwrights as Preston Jones, and his students have been among the most influential Dallas arts leaders…

Mr. Baker was also known for his mercurial moods and his practical jokes. Actor Charles Laughton, whom he directed in the 1950s, called him “crude, irritating, arrogant, nuts and a genius…”

While a professor at Baylor University in the 1950s, Mr. Baker attracted national attention with his experimental productions. His national profile caused Dallas theater backers to invite him to set the initial course for the city’s leading theatrical institution. He worked with master architect Frank Lloyd Wright on the design of the Theater Center’s home for its first 50 years, the Kalita Humphreys Theater. [This would be Wright’s last building.]

Controversy always lurked near Mr. Baker. In 1963, Baylor University asked him to omit language the school objected to from Eugene O’Neill’s Long Day’s Journey Into Night. He, his wife, Kitty (who taught mathematics at the Baptist-affiliated university), and his entire staff resigned — but immediately set up an even bigger shop at Trinity University, by then in San Antonio.

In the 1950s, Baker invented revolutionary arts training known as “integration of abilities,” which won the attention of theater artists around the world…

…Baker made a crucial voyage to England, Germany, Russia and Japan to observe theater. Insights from this trip helped form a new Baylor theater, Studio One, which placed the audience in swivel chairs embraced by six stages. Over the next decades, Baker would contribute to 10 other Texas theater designs that positioned the dramatic action around the halls, rather than on a 19th century-style picture frame stage. 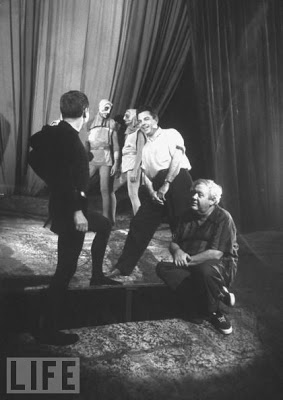 In my one year at Baylor University in the late ‘50s, I was not impressed by the quality of education or the professors. Even so, my best college professor at the three universities I attended may well have been Paul Baker at Baylor.

I took two courses he taught: Beginning Playwriting and Introduction to the Creative Process. I quickly confirmed I was no playwright in the making. My heavy-handed play, laden with obvious symbolism and self-consciously intellectual dialogue, earned me a C, generous at that. But the other course was one of the best I ever encountered in Texas academe. We studied all kinds of art — literature, painting (I wrote a paper on Joan Miro), architecture, dance and music in one electrifying semester.

It was the process of creating art that Baker was after. We read what artists themselves had written in letters or essays about their work. We read their works (literature) and the analyses of critics. It was, as you can tell, a lot of work. Work undertaken willingly and enthusiastically. In class Professor Baker lectured in his roving and animated style and he brought in a few of the people we studied to lecture in person. Luckily, all my other courses were a cakewalk and so I made an A in this scintillating class.

At the time I did not realize how truly marvelous this course, or Baker himself, was. It was only years later that I came to view this as a significant part of my education. Day dreaming in law school as the teacher droned on about the Statute of Uses or Texas land titles, I found my mind going back to things we learned from Baker, or more accurately, with Baker. His mind seemed always sweeping over the familiar (to him) material and finding new insights which clearly delighted him. He was equally delighted if one of the lunks seated in the Baylor Theater where the class was held came upon a revelation.

At the time it was said that there were about three avowed liberals on the Baylor faculty. I believe Paul Baker was one of them. I knew my great debate coach, Glenn Capp, was one of them and I had heard that Dr. A.J. Armstrong of the English Department (and his wife Anne) completed the courageous Baylor triumvirate. There might have been a few other pretenders or, as we said in other contexts, “LBJ liberals,” not unlike what Sam Rayburn said of Dixiecrats, they were like “new antiques.” (Of course, Rayburn never said that of his close ally, Lyndon.)

I was shocked to see that the story about Paul Baker’s death at age 98 that ran in the Austin paper failed to even mention Baker’s resignation from Baylor in 1963 over the attempt to censor a play at the Baylor Theater. I wondered whether Baylor University had succeeded in whitewashing history?

In 1963 Paul Baker mounted a production of Eugene O’Neill’s “Long Days Journey Into Night” at Baylor Theater and, if I recall, got to perform it once before Baptist ministers in Waco and others incensed by its language and themes put up a righteous howl, as Baptists do so well. Then president of Baylor Abner McCall ordered Baker to excise all the “bad language” and some of the improper themes before going on with the production.

Baker resigned rather than accede to this demand. Virtually the entire Drama Department, including its graduate students, also resigned. Many followed Baker to Trinity University in San Antonio where he kept teaching and producing plays. His principled stand at Baylor had only enlarged the gigantic stature of this man in my eyes.

A few years ago, perhaps in the ‘90s, I saw Paul Baker again when he appeared at the Hyde Park Theater in Austin to support a play written and performed in by Ken Webster. Did I actually speak to Baker and stumblingly try to tell him how he had lit up my young mind back at Baylor University four decades ago? Or, did I so vividly imagine my encounter with him that I had come to believe my fantasy? I am honestly not sure. I hope I did at least try to tell him what he meant to the education of one kid at Baylor.

Growing up in Waco in the ‘40s I had gotten the idea that Baylor was the pinnacle of the college experience, an experience no one else in my family had. Hence, after my freshman year at SMU, I jumped at the full debate scholarship offered to me by Prof Capp (as he was known by all) and took up residence in old Brooks Hall, a gothic five story men’s dormitory without elevators, now gone, replaced by a gleaming 21st century dorm.

Unfortunately, not all of our youthful ideas survive a reality check. Baylor did not live up to the idea I had of it from living in Waco and rooting for the football team on Saturdays when my long dead father took me to the games. Some of the fondest memories of my life. As a student at Baylor in 1958, even I could see how narrow and parochial the school was and how limited its horizons in assessing the human condition through great literature and science. Diversity was something strenuously resisted and so the intellectual climate there was stifling.

Some five years before the dustup that drove Paul Baker away, I left Waco to take up residence at the Campus Guild Coop on the campus of the big state university in Austin. Home at last. But the part of Baylor I took with me was what I learned three hours a week in Paul Baker’s course, perhaps the best one I had in my checkered college life.

The season has been marked by the shaking of the earth as giants have fallen. Before word of Paul Baker there was another giant who passed. The great American and Texas jurist William Wayne Justice was also taken away. It is likely that they never met each other even though close in age. But both men affected my life and the lives of so many others.

2 Responses to Paul Baker : Giant of Texas Theater Dies at 98