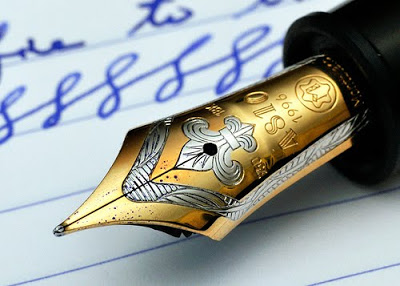 Does Hillary Clinton carry with her an elegant Montblanc pen?
Mahmoud Abbas:
‘Is This A Pen I See Before Me?’

What a minefield Abbas must now traverse… How can he be the one now to legitimize more than 40 years of oppression and land theft by Israel?

Once again, the great charade. The endless shuttles, the brinksmanship. A Middle East “peace process” is, well, in process.

It is all so familiar now. All the details — including the lack of details — are there, warmed over from Oslo, from Madrid, from Clinton’s Camp David.

But IS it a charade? Maybe not. Perhaps Secretary of State Hillary Clinton thinks she can finish the work her husband Bill failed to finish at Camp David in 2000.

The big question (as ever) is: can the Palestinians be made, this time, to sign the unconditional surrender document that is there on the table? 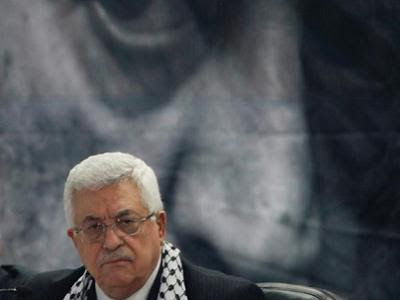 Mahmoud Abbas with visage of Yasser Arafat in background. Image from Palestine Chronicle.
Does Hillary perhaps carry in her purse or briefcase the very pen — an elegant Montblanc fountain pen, perhaps — that poor old Yasser Arafat finally refused to take up with his palsied hand at Camp David? Does she think that Mahmoud Abbas, another old man, can be made to take the pen and sign?

She seems to. The effort is serious. The Europeans have been arrayed. The ever-serviceable Tony Blair was moved into position three years ago, as the Special Envoy representing the Quartet (the U.S., the European Union, Russia, and the United Nations). Blair is thus able to tell Abbas he can expect no help to come from other quarters.

Mubarak as well is in position, presumably with the same message. Meanwhile, George Mitchell, yet another old man, toggles between Ramallah and Jerusalem pretending tirelessly that this is a process of negotiation between equals.

How does Abbas feel about it all? Is it my imagination that he looks profoundly sad as he is made to walk with the real power-holders down a White House hallway?

He surely worries about that pen, ready for his hand. He must remember so well the fate of his old comrade-in-arms, Yasser Arafat. Arafat was brought to Camp David with a promise that, should the talks fail, the failure would not be hung around his neck.

He was presented with a deal which, the Americans would have said, was the best deal the Palestinians could ever hope for. (Undoubtedly the Palestinians are frequently reminded that each deal they rejected in the past was better than the next one to come.)

President Clinton seemed to believe. He apparently trusted his two managers of the Camp David process (Dennis Ross and Martin Indyk) even though both had long and deep ties to Israel’s expansionist governments. Big, bluff, charismatic Bill Clinton held the pen and urged Arafat to sign. Surely Bill would not lend himself to a shameful and dishonest deal.

But it WAS a shameful and dishonest deal. The Israelis had not really made any solid commitments at all, either to the Americans or the Palestinians. The maps were vague. The percentages of withdrawal from the occupied Palestinian territories were dishonestly calculated.

In fact, Palestinian territory would be broken into enclaves divided by the inexorably expansive processes of settlements, roads, nature preserves, security reserves, etc. [See map below.]

Map from UN Office for Coordination of Humanitarian Affairs, 2007.

And, while words like sovereignty and independence were grandly used, the reality was that a Palestinian “state” would not have any of the essential attributes of sovereignty. It would be permanently disarmed. It would not have control of international boundaries (the Jordan valley would remain under Israeli control).

On top of that, as Arafat saw, all the obligations falling on Palestinians were front-loaded. Palestine would give up rights under international law immediately and for all time. (And these rights, and the refusal to surrender them, represent the only thing the Palestinians have to negotiate with.)

Obligations falling on Israel, such as withdrawal of a large proportion of the smaller and more isolated settlements, not only were vague, but they were back-loaded: things that might happen in the future. Or might not. They would be dependent not only on the realities of Israeli politics (“Withdraw settlements? –are you crazy?”), but on the good behavior of Palestinians. Good behavior defined and judged by Israel, that is.

Unlike virtually every case of new statehood since 1945, Palestinian “statehood” would be probationary, not immediate. Quite possibly, for a very long time.

Arafat could not sign. He didn’t. Immediately, the “failure” of Camp David WAS hung around his neck. Subsequently, with no effective protest from the U.S., this aged nationalist leader was imprisoned in his offices, with Israeli bulldozers making the space smaller and smaller and uglier and uglier. The most humiliating circumstances of existence, including overflowing toilets, were arranged for his old age.

Still he remained, an obstacle to the unconditional surrender that Israel wanted the Americans to arrange. Ariel Sharon was impatient, wanting to impose his own “final settlement” before he died. Arafat, old, palsied, maltreated, and seemingly feeble, did not cooperate by dying. Finally he did die, in France, in a way that seems to have mystified the French doctors who examined him before and after. We may never know the cause of death.

What a minefield Abbas must now traverse. If, in the face of Israel’s continued seizure of Palestinian land (humiliating for himself as also for the U.S.) he breaks off negotiations, how much different from Yasser Arafat’s will be his own fate? And how much more misery will be visited on the people of the West Bank and Gaza in Israel’s never ending (and so far never successful) effort to break their will?

But what else is possible for Abbas? He is Abu Mazen, for most of his life a representative of the anti-colonial aspirations of the Palestinian people. How can he be the one now to legitimize more than 40 years of oppression and land theft by Israel?

Poor Mahmud Abbas. Perhaps this is a charade, soon to pass. But what if it’s not? If not, and if Hillary and Tony have their way, the pen WILL be put before him. When it is, the most powerful men and women of the world will be there, smiling and radiating good faith as they nudge him gently but oh-so-firmly in the pen’s direction. What to do? What to do?

(A later article will explore in more detail the shape of a final settlement that the leadership of Israel could accept, whether as part of the present “peace process,” or a later one.)

[Dr. Paul A. Beckett is a specialist on international politics who lives in Madison, Wisconsin. He can be reached at beckettpa@gmail.com.]

1 Response to Paul Beckett : Mahmoud Abbas and the Ubiquitous Pen