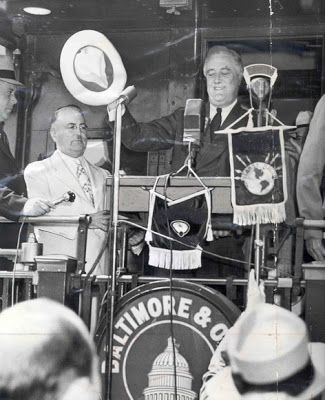 FDR: Time for a new Popular Front to support Obama?
‘The young and not-so-young folks in Times Square, Harlem, Capital Square in Madison, Grant Park in Chicago are our people, and have every potential of mobilization for the long haul.’
By Paul Buhle / The Rag Blog / November 5, 2008

Hello everybody. I was asked to write an election piece for a French leftwing mag, and will be doing so in the next couple days.

I say, the small blip that produced new SDS (and the effort to create a real MDS) a couple years ago was a precursor of the large blip that brought young people into a decisive role in the election.

We all know the limitations of Obama’s campaign and advisors and all that, no need to dwell on those for the moment.

What counts more, in my view, is the prospect or possibility that, as FDR, an embattled Obama being pushed in every-which direction will need the kind of voting and support bloc that the Popular Front created, mainly through the new CIO but also through a range of cultural organizations, for FDR’s re-election campaigns (leaving aside 1940 and even then, FDR depended heavily upon the movement that the Pop Front had created). The Left built itself up around and beyond the titular political leader.

I showed my “Jewish Americans: Films and Comics,” an animated 1944 film piece, a couple days ago, made by folks who quit Disney after the strike, and other lefties; I could identify several of my interviewees in the credits. It looked, more than anything else, like an Obama video ad.

Let’s savor this moment and use every possibility to our advantage.

The young and not-so-young folks in Times Square, Harlem, Capital Square in Madison, Grant Park in Chicago and all those places are our people, and have every potential of mobilization for the long haul.

Let’s help them win their place in history.

[Historian Paul Buhle is a writer, editor and senior lecturer at Brown University, and a leader of Movement for a Democratic Society.]