Paul Buhle :
Reza Aslan’s ‘Zealot: The Life and Times of Jesus of Nazareth’

Whose Radical Jesus? ‘Zealot’ is the story of a literary success. 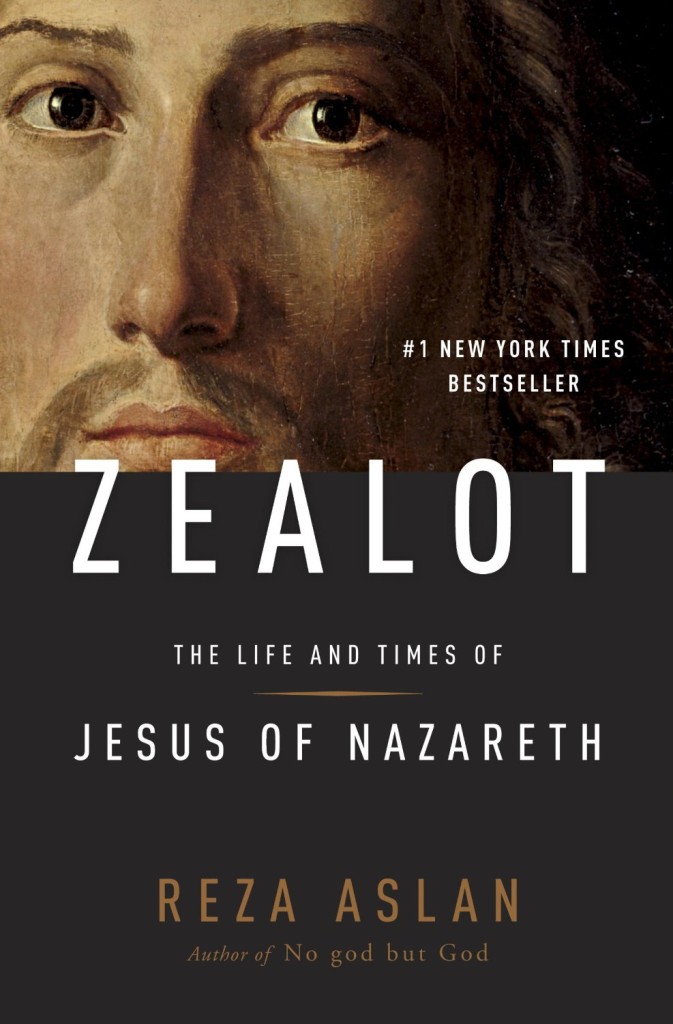 Reza Aslan’s Zealot could have been called “Jesus Against Empire.”

A better title for this best seller would be: Jesus Against Empire. If the devil can quote scripture, according to tradition, and if the recovery and analysis of assorted versions of what became Bible text (or did not) have become a scholarly big business, then we can hardly expect any version to be accepted by all.

Still, Reza Aslan himself is by now the kind of major media personality who appears on “The Colbert Report” (and what could be more major?) with views on subjects ranging from Iran (where he was born) to the silliness of Fox News on Christmas.

Lionsgate has purchased the film rights to his new book, Zealot, The Life and Times of Jesus of Nazareth, and he is reportedly scripting a television series for FX. Conservatives gripe at his Jesus, while senior Biblical scholars seem to be complaining that they never got the earthly attention and rewards now ladled upon him.

Zealot strikes me as the most radical version of the Christian story since C. Osborne Ward’s massive two-volume The Ancient Lowly appeared in the Gilded Age (1888 to be exact). Older brother to famed sociologist Frank Lester Ward, C. Osborne argued that Christianity was the “slave religion” taken up by those miserable Roman masses who craved a decent funeral and a happier afterlife.

Read by every literate radical who could lay hands on a copy (the Charles H. Kerr Company reprinted it in 1907 for a new generation of socialists), the tome showed religion co-opted by the rich and, above all, by the servants of empire. In the process, Christianity’s original promise got turned inside out.

Ward’s interpretation could not easily withstand evidence that some of the very rich adopted Christianity along with the very poor, from the get-go. Still, could there be a hidden truth in the argument? For more than 2,000 years, a whole lot of people have thought so, in part because the texts can be read against empire (and slavery as degradation and exploitation, its leading function) so effectively.

Sci-Fi giant Philip K. Dick, more mystic than radical, nailed it this way in his super-weird, late-life novel Valis (1981): “The Empire is the institution, the codification, of derangement; it is insane and imposes its insanity on us by violence, since its nature is a violent one.” He goes on to say, still more gloomily, that “whoever defeats a segment of the Empire becomes the Empire; it proliferates like a virus, imposing its form on its enemies,” making them part of itself.

If this sounds like the saga of decolonization turned into neocolonialism, with South Africa the most dramatic of many painful examples, then Dick (who claimed to receive this wisdom through an intergalactic message of some kind) could not be far wrong.

Why Aslan, and better, why now?

Why Aslan, and better, why now? Best sellers have their own history, and Billy Graham — now apparently about to receive his Reward one way or another — was rarely far off the charts with his soporific literary sermons. In an era of dechurched masses looking for substitutes (angels, anyone?) and those still in church urgently looking for ways to bring back the crowds; in an era when the most reactionary pope since the era of fascist collaboration is replaced by possibly the most progressive pope ever; that is to say, in these days, a radical revisiting of the Greatest Story Ever Told can hardly be a surprise.

Aslan himself is a fascinating fellow. A boyhood convert to Christianity, a PhD from that notable New Age center, Santa Barbara, he has a marvelous gift for popularizing ideas. But he is also a serious reader, following up scholarly leads near and far. The Notes and Bibliography take up more than 60 pages of Zealot, citing all kinds of older and newer information and interpretation. He wants us to believe him, but he is clearly engaged in a dialogue without the usual special pleading.

The subject has been studied and trolled with increasing intensity for 20 years or so. Aslan does not have anything spectacularly new to say. But he has found a new audience, and the great value of the work, for this reviewer anyway, is the placement of real-life Jesus in backwoods Nazareth (this makes the birth in a Bethlehem stable one of the many useful myths necessary for the arrival of a much-expected Messiah).

The “windswept hamlet” in the “rough and tumble Galilaen countryside” was not even the kind of place where enough wood existed to train a carpenter. Crude structures of mud and brick required a different set of building skills. But here’s the bigger and main story: It was a hearty walk from an imperial city in the making, Sepphoris, with polished-slab streets, luxurious public baths (made possible by aqueducts), two-story homes adorned with sexy mosaics and a Roman theater seating 4,500!

Why didn’t I hear about this in Sunday School? You might well ask.

So the boys in JC’s family and their dad, too, until his early demise, came in town to work, answering the demand for labor. They were miserably exploited, of course, and if this doesn’t sound like the source of many a peasant revolt supported by segments of a proto-working class, then modern — as well as ancient — history must be littered with sheer accidents.

The district had seen continuous waves of mini-revolts and blood-curdling repression, messiahs, self-proclaimed now and then, martyred as soon as the Romans could get their hands on the victim. Sometimes the revolutionaries actually overwhelmed the guards of the royal armory and took the weapons, burning and/or robbing the homes of the wealthy and taking revenge on the Jewish theocratic aristocracy, cursed as collaborators with Rome.

For those outrages in 4 BC, the Romans burned the captured city to the ground, murdering the men and selling off the women and children as slaves. Actually, it was the rebuilding of Sepphoris that brought the Jesus family to work, and if young J (not yet JC) didn’t live through or take part in the revolt, he doubtless heard plenty about it.

The details of Roman rulers, some bad, others worse, take up a lot of space in Zealot. The siege around the Jewish fortress-city Masada, not far from Jerusalem, is of particular note because Emperor Vespasian determined to put an end to Jewish rebelliousness once and for all. The population was starved by a blockade, and then the Romans put something like an ancient A-Bomb (actually, a huge battering ram to break down the walls) into practice.

Everyone still alive inside was murdered with the exception of the failed (and captured) Messiah, dragged off to Rome. All the religious documents and treasures were burned or carried away, offering proof that the Jews’ very god had been destroyed by the more powerful Roman gods. The stage had thus been set for something yet more dramatic.

Another of the charms of Aslan’s book is the sidelight upon the popular culture of the cities in what we can now call New Testament Days. Throughout the Jewish settlement, the ancient version of snake-oil salesmen worked the crowds, frequently performing sleights-of-hand in the manner of damaged limbs suddenly working again, the blind made to see, and very occasionally (because it must have seemed so awfully suspicious), the dead brought back to life.

This was real street-fare entertainment, familiar to modern life until the radio and films gave urban visitors, shoppers and idlers something to do. Back in 1910, socialist and wobbly soap-boxers attracted crowds with rhetoric (and competed with hucksters), mixing curses and jokes, not so far from the more political-minded public orators of Jesus’ day.

Why be surprised that Jesus ranged and rambled from the time he found his first disciples among fisherman at Galilee through his entrance to the holy city on a donkey, to his capture, persecution and crucifixion? Aslan tells us that the “outlaws” of the day were just as likely to be political revolutionaries, and so many were crucified that some Roman authorities sent to clean up the empire’s dirty work became appalled at the omnipresence of the barbaric practice. Without Jesus coming back to life, there would be no Christianity. But up to that point, his life could be merged fairly easily with those of other leading rebels.

The very title of Zealot is an homage to the strength of the existing Jewish tradition, also to an unrelated (but how could anything be unrelated?) band of zealots who rose up and were drowned in their own blood. Jesus was a rabbi-of-sorts, a challenger of the official priesthood, whose doings in the temple were worse than the practices of the money-changers. He saw everything that he did and hoped to do in that light.

Jesus’ extended family might have run the whole religion from Nazareth and surrounding regions, as they seemed to manage at first, but Paul, happily for himself banished to Rome, pulled the most astounding trick in world-religious history. Persuading enough upper and lower classes to follow the new faith, he set things up for the empire to swallow up Christianity.

In the process, Jesus became “Christ” or “the Christ,” a Romanish sort of god-designation unfamiliar to the Jews. If this is not quite fair, and Paul actually had in mind a subtler spiritual attack on empire, it seems to have been lost on his disciples, who made their deal with Rome, while actually penning most of what passes as his chunk of the Bible.

We are, in a sense, back to C. Osborne Ward and the Ancient Lowly, after all. What began as rebellion finally became an ideology of nonmaterialism, life after death (the critics have been calling it a Death Cult ever since, making a good argument about the practice of it by the powerful) and so on.

That it could not remain such a gospel is a testament to the usefulness of the texts and traditions in so many other times and places. The omnipresence of theology students at so many urban settings of Occupy (also, Wisconsin’s own uprising against Governor Scott Walker, our Herod) should tell us something if we are listening carefully.

Copyright Truthout, where this article was first published. Cross-posted to The Rag Blog by the author.

[Paul Buhle, aged New Leftist and editor of the comic Radical Jesus: a Graphic History of Faith, is still surprised to remember that he was an officer of the Christian Youth Fellowship, circa 1962. Read more articles by Paul Buhle on The Rag Blog.]

2 Responses to Paul Buhle :
Reza Aslan’s ‘Zealot: The Life and Times of Jesus of Nazareth’